You Are Here Home » STARTING OVER MIDLIFE » After Divorce: Becoming Independent by Working the Dream 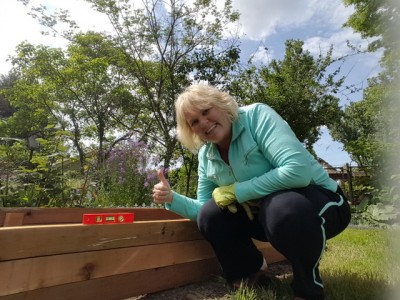 How do you create a new life and new dreams after divorce?

I’m a divorcee for nearly a year now. I bought and moved into my little dream farmhouse house at about the same time.

And here’s the weird thing; most of the time, I like it.

But there’s always this little inkling that maybe that slammed car door sound is one of my kids coming to visit. Perhaps it’s the feet of one of my boys bounding up the front steps I hear–instead of the mailman. Even my dog gets tricked, though more and more, she too hears it but no longer reacts.

I’m not quite there yet.

My tall son, with the go-go-gadget arms, has always been there for me; to change a light bulb–no ladder required, carry the 50lb bag of dog food into the house, or to unload lumber from my trunk. But about a month ago, my son informed me he was moving. He is now living with his brother, as they build a fitness enterprise–55 miles away! I know, I know. It’s not that far.

But it made me realize 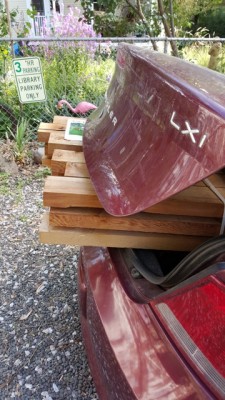 My son’s move also made me think about how much my life has changed in the last five years. It made me a little sad. OK, a lot sad.

Until now, I thought my being alone was a result of the divorce, but now I realize that’s not precisely accurate. I’m also alone because I have an empty nest. My children’s ages are separated by several years, so my nest emptied slowly; one baby bird at a time. And their friends were always dropping by–friends I still enjoy visiting. But that chapter of my life has slowly closed. And I’m challenged to figure out what this new chapter will look like; what it will feel like.

How do I create a new dream at midlife?

It’s a challenge for any “empty-nester.” But when you’re the only one, the mama bird left behind in the nest, it’s particularly difficult. As I was feeling all these feelings, I was simultaneously obsessed with one of my summer goals; to build a planter box for my vegetable garden. I knew it was going to be hard. I’m not one of those independent women who yield power tools like Julia Childs wielded her kitchen knives. No, I yield a mean spatula, but not power tools.

But I decided that the best way to move forward with my new life is to invest time and energy into a small project that will help me to become more comfortable living on my own. After finally getting the materials I needed from the lumber store; they sat on the deck for a few weeks–staring at me.

Then one day I thought,

“Karen, this is it. If you’re ever going to become truly independent and embrace your new life, you’ve got to start doing for yourself. You’re going to do this. This weekend, you are going to build that damn raised bed garden, even if you end up sore for a month, and the result is some cattywampus pile of lumber and screws, with a few tomato plants inside it!”

When a friend called, wanting to visit from out of town, I warned her that I had a project to do and come hell-or-high-water, I was going to do it. But she still came–dreamers need good friends like her. And I’m so glad she did. My daughter, Nicole joined us in the backyard after putting my granddaughter down for a nap in the guest room.

So, there we were, three women, 12 boards, 24 screws, and the All-American symbol of an independent woman–a shiny, new electric screwdriver. 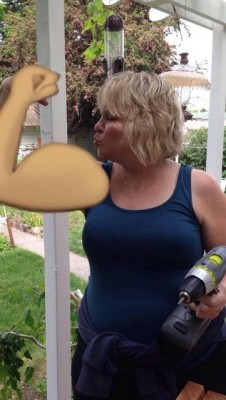 As with all first dream journey steps, I may have looked ambitious on the outside, but it’s not what I was feeling on the inside. My father had three daughters; he didn’t exactly raise us to be independent women.

Some fathers would have simply taught their daughters what they would have taught sons if they’d had them — not my dad. His warnings were dire. Unplugging an appliance could get you electrocuted. Mow the lawn, and you could cut your foot off.

I’m not sure what we were told would happen if we used a screwdriver, but I’m sure it had something to do with drilling a hole into some random and useful appendage. You get the picture.

Here I am, 50-years later, feeling like anything I try to do will fail and fail miserably, possibly resulting in serious injury. 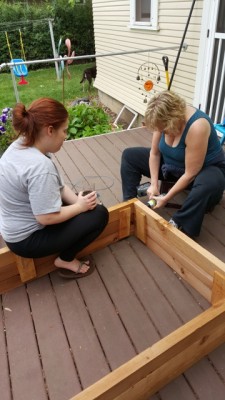 The truth is being independent, and launching a new dream life is more complicated than I imagined. There’s a lot of fear that comes bubbling to the surface like fizz in a bottle of freshly popped champagne. It has the potential to stop you from stretching yourself beyond where you are stuck. You can’t make your dreams come true without stepping through your fears and insecurities.

Knowing I had to try this project, I charged my screwdriver and somehow managed to put the bit in the tip without drilling a hole into my fingernail. Miracle #1! Nicole stood the four sides together, and then we counted the screws. There were twenty-four. Pre-drilling, a friend had advised, is what we-women must do. But of course, first I had to try to drill the screw into the wood.

Next, I compared the drill bit to the screw size, since I was told to use a bit a little bit smaller than the screw circumference. I found just the right one. It was getting hot out, or was it my peri-menopause self? Hard to tell. I pre-drilled twenty-four holes, then downed a glass of ice water, in preparation for the actual drilling.

The first screw wouldn’t go into the wood. I fought and muscled and pushed the screwdriver and got most of it in, but enough was sticking out to hurt someone who might walk by to look at my bounty of garden goodness. 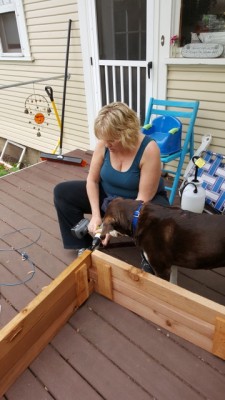 I told myself that not being the world’s best screw-driver professional is not the end of the world. If one screw doesn’t go in, I’ll camouflage it somehow. So that you know, this was not the real me talking. No, the real me was feeling the bile of imperfection rise in my psyche.

But I literally couldn’t do it! Literally! I couldn’t get enough strength behind it.

The end of the screwdriver was stripping the end of the screw down to a hole. And as little as I know about construction, I do know one thing–it’s not right. So, I left it and went on to the next and the next. By about the fifth one, I knew something was wrong.

Time for another glass of ice water.

I chatted with my friend, Nicole and my daughter about what to do. They were even more clueless than me. They’re young–they can’t help it. I decided to go back to the beginning–back to my bit box. The only thing I could think of was that the bit was too small. I went up a size level and tried again. I did this three or four times before getting the one that was “just right.” This time, I got one screw all the way in before pre-drilling the other 23 holes. Yeah, I was still at the pre-drill stage. 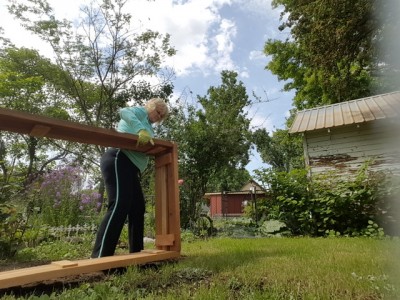 Then my drill slowed down and died. I’d killed the battery. I plugged it into the charger, and we all took a break. I didn’t know until talking to my dad, that drills only take an hour or two to charge fully. Mine got a 24-hour charge.

The next day, with my daughter and friend gone, I finished it. Amazing how those pre-drilled holes helped, once I had the right bit size.

Fifty-three drilled holes later, twenty-four screws in place, I began to work on the garden space. I shoveled and hoed and raked and leveled.

Then I dragged, carried, and flipped the box from my deck to the garden. I laid down cardboard for weed-block at the bottom of it. Next, I had to figure out a way to get the heavy bags of two cubic feet of garden soil to the box. I not-so-carefully dropped them from my trunk onto my garden wagon and then rolled it into the garden space, flipping each bag, one-by-one, into the box. I tore the bags open and dumped each bag of soil into my would-be garden.

And then I went inside, and I decided to sit down and write for a while. You see, I don’t have the most muscular body and have a few health issues, so working like a crazy woman all at once doesn’t work for me.

It took me two days to complete my garden project while “breaking” to write and do other household tasks.

Finally finished, I stood back and admired my work. I did that several times over the next few days. The feeling of pride was unlike anything I’d felt before. I could probably have hired someone to do it for me. I could have waited for family or friends to do it for me. I didn’t want that. 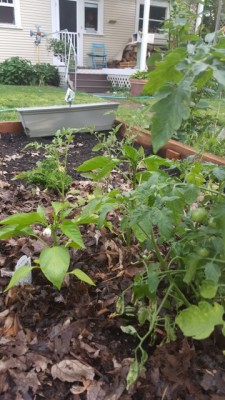 I wanted a symbol that I had officially launched my new life.

On this new adventure; my dream journey into an independent mid-life, I needed to do this by myself. It wasn’t about doing yet another project. No, this one was entirely different. I found my independence. I connected with my new home.

And it turns out what helped me more than anything, was two women cheering me on. I didn’t want physical help. It turns out that what I needed more than anything was the emotional support of two strong women. This was my first building project. I made something with my two hands. It may be a lesson a long time in the making, but maybe that’s why the success tastes so sweet.

When you’re feeling scared of taking those first steps to launch your dream, maybe like me, all you need is words of encouragement and a rechargeable drill.

« Motivational Speaker Dream: How To Connect with Your Audience
How to be Bad at Public Speaking: No Presentation of Story »