Dreamers, did you know that March is National Women’s History Month?

Did you also know that National Women’s History Month was started in Sonoma County, California–the very same county where 8WomenDream is headquartered?

National Women’s History Month is intended to pay tribute to the revolutionary women who have influenced history.

“As recently as the 1970’s, women’s history was virtually an unknown topic in the K-12 curriculum or in general public consciousness. To address this situation, the Education Task Force of the Sonoma County (California) Commission on the Status of Women initiated a “Women’s History Week” celebration for 1978.

The week March 8th, International Women’s Day, was chosen as the focal point of the observance. The local Women’s History Week activities met with enthusiastic response, and dozens of schools planned special programs for Women’s History Week. Over one-hundred community women participated by doing special presentations in classrooms throughout the country and an annual “Real Woman” Essay Contest drew hundreds of entries. The finale for the week was a celebratory parade and program held in the center of downtown Santa Rosa, California.”(Source: National Women’s History Project)

You can call Twila’s story a true American Dream story.

Twila True is an Oglala Lakota Sioux who grew up on the Pine Ridge reservation in South Dakota, where living conditions for the 35,000-plus tribal members are beyond harsh. A staggering 97% of the population lives below the national poverty line and unemployment is at 90%, which has led to high rates of alcoholism, drug abuse, hopelessness, and suicide.

“Pine Ridge is the poorest county in the nation,” declares True. “Yet, most people outside of the Dakota State don’t know that Pine Ridge exists.”

Twila True rose above these tremendous challenges and has become a self-made success. With only a high school education behind her and a passion to help others, in 2012, she and her husband Alan co-founded True Family Enterprises; which currently owns and operates a multitude of thriving businesses across Southern California.

True has never forgotten about the deep struggles of her Oglala Lakota Sioux people. In 2015, True founded the True Sioux Hope Foundation with the mission to provide critical aid to the Sioux people and help fight the many social problems tribal members face.

“The Foundation was born from the belief that with a little help, the strength and spirit of the grant Sioux nation can thrive once again with pride and confidence,” says True.


Through revenue from True’s enterprises, private donations and support from partners such as Deseret Industries, Mack & Moxy and Arizona State University, the Foundation not only provides critical aid to the most vulnerable, but it implements models of sustainability to foster permanent, positive change. This includes programs that support education, health, and employment. For example, the nonprofit raises funds to fight infant mortality, which is at 20%–the highest on the continent–and provides childcare, proper nutrition, and parenting classes.

As hunger on the reservation is rampant and more than one-third of the population is diabetic, the Foundation partners with Thrive Market to create custom healthy food box options to supply families in need. Since May 2017, the True Thrift Store offers employment opportunities and provides tribal members a place to purchase clothing and household items. And, thanks to a higher education program, youth from the reservation can receive a college education.

True has also launched the Twelve Cycles initiative to provide basic feminine resources and education to girls on the reservation.

“The lifespan for women on the reservation is a devastating 52 years,” asserts True. “A women will menstruate for 40 of these years. Yet, most girls on the reservation don’t have a single month’s supply of feminine pads or tampons.” Also, many females don’t have access to proper care for health issues and painful conditions related to their menstrual cycle, such as endometriosis. “As a result of poor menstrual hygiene management and knowledge, girls will skip school an average five days out of the month, which negatively impacts school performance and in the end, their economic potential,” True explains.

While the Foundation is accomplishing extraordinary things, True, named “Most Influential in 2015” by The Orange County Register, says that in the beginning, the biggest challenge was to create enough awareness around the Oglala Sioux issues to make an impact.

She thanks her work ethic for pushing her forward:

“I know I have to stay driven and expect hurdles and hard work.”

The Oglala Lakota Sioux desperately needed a voice and today, Twila True and her Foundation are that voice.

“Our goal is to encourage everyone on the reservation to help, hope and thrive,” True says.

It’s worth noting that True’s Sioux name means “Woman Who Walks Toward Future.” That’s exactly what True does.

Because “Nevertheless, She Persisted…” 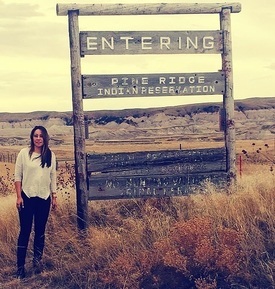 Dedicated philanthropist and thriving entrepreneur Twila True is an Oglala Lakota Sioux whose parents were born on the Pine Ridge reservation in South Dakota. She is the founder of the True Hope Sioux Foundation and CEO of Irvine-based True Family Enterprises, which she founded alongside husband Alan in 2012.

To learn how you can support the True Hope Sioux Foundation click here. For more information about Twila True and True Family Enterprises, click here.