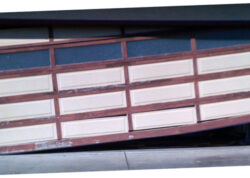 Last weekend, my husband “Virgo Man” was set to fix the garage door. It’s been stuck for a while. He had already fixed it once, but it broke again. He can fix anything.

I have never known him to not be able to fix something.

However, the garage door bested him. This is a picture I took this morning, pre-repair (obviously).  When you own a house, this is pretty much where the money goes.

Do you know the 5 stages of grief?

I went through them with this garage door, but not about the door. About the money. To wit:

As I said, Virgo Man can fix anything. Even as I heard him out there in the garage, cursing in some extremely creative ways, combining words that one would not normally place together in a sentence, I assumed everything would eventually work out fine.

So when he came in and said, “The garage door is broken,” (that’s a paraphrase. You don’t want to know his actual words, trust me) I said, “You just need to take a break. You can fix anything.” To which he replied, “Go look at it. It’s not fixable.”

I did go look at it. Denial was an extremely brief stage. All you have to do is look at the picture to know how soon I got over denial.

I didn’t really get angry, but I did get resentful. Although I’m not sure there’s any real difference between anger and resentment anyway, except that anger yells and slams, while resentment pouts and stews.

If we didn’t own this house, we wouldn’t be dealing with the garage door.

If we didn’t live in this neighborhood, where everyone spends every waking moment prettying up their grounds, and where every garage door is a design statement, then we wouldn’t be dealing with the garage door. If it weren’t for the neighbors, I wouldn’t even be thinking about replacing the garage door.

Those dang neighbors. They’re probably sitting in their kitchens right now, gossiping about how we’re dragging down the home values. My neighbor on one side already informed me of this, a few days after we moved in. She was mad because we bought our house at a post-crash price, and she felt this devalued her house.

Really! The housing crash is not my fault! And I can prove it.

Housing prices dropped a whole bunch more after we bought our house, and we could be underwater ourselves before all is said and done.

Anyway, Virgo Man got through this stage faster than I did, probably because he yelled and slammed out there, while I pouted and stewed. So when he said, “There’s a silver lining! This means I won’t have to prep the door for painting!” I was unmoved.

This is the stage where you start trying to come up with workarounds. What if we just took the thing down, and made sure to keep the garage really clean? Or, what if we put a tarp up? A really nice, clean tarp? We could pretend we’re remodeling. That would keep the neighbors off our back for a while, anyway.

Or, maybe it’s not as bad as we think it is. Could we just pull the lopsided edge down, and kind of nudge the panels back into place, and then just not touch it? No. Again, look at the picture. There is no help for this door. We have been expecting to hear a very large crash every night, that’s how unsound this thing is.

Hey – maybe we can get a cheap garage door on craigslist. (Yes, we found one. Exactly like what we wanted, and for less than half the retail price. But it’s in Portland, Oregon, and it’s 16 feet long and 7 feet high, so it doesn’t really lend itself to shipping 1000 or so miles.)

Then there was the phone call to a store at midnight on Sunday, because they were staging a midnight sale. The lady in the offshore call center needed me to repeat my question several times before she understood that I was asking for a big discount on a garage door, not a garage door opener or a garage door remote control. She thanked me for patiently waiting, but no, there is no 30% off on garage doors.

I had a little trouble transcending the bargaining stage, because once I Googled ‘garage door repair’ I could not escape it. Everywhere I go on the web I still get ads for garage doors, a full seven days later. I’m sure I’ve Googled other things since then, but for some reason, the garage door ads are sticking.

When will it all end?

Again, not really depression in my case, but a good healthy dose of 3 a.m. anxiety. You all know the kind, where you wake up in the wee small hours and start calculating sums in your head. And every time you get to the end of the calculations, you prove to yourself that you do not have an extra $1200 lying around somewhere, so you start calculating again to see if maybe you forgot to carry the 2. It’s amazing how often you have to run the numbers and have them come out exactly the same before you believe them.

As I write this, the garage door installer is out there pulling off the old door. His opening words to me were, “Wow. This thing is really dangerous.” So now I know we really did not have a choice in the matter. I have, at last, accepted my fate.

But I still don’t know where the money is going to come from. And I still ask myself why I care so much about what the neighbors think, and if I’m letting my assumptions about the neighbors’ opinion of me set my financial priorities.

All the money I’m paying the garage door guy today was earmarked for something else, and all the things it’s earmarked for are equally important. Food, shelter, transportation, you know – stuff like that.

But, taking a cue from that uber-survivor Scarlet O’Hara, I’ll think about that another time. Right now, this is where the money goes.