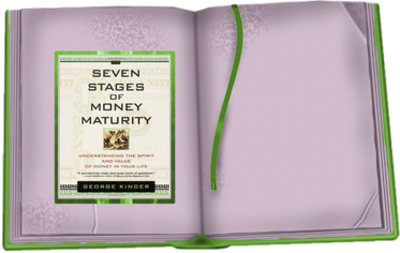 In his astonishingly thoughtful book, The Seven Stages of Money Maturity: Understanding the Spirit and Value of Money in Your Life, author George Kinder identifies (obviously) seven stages of money maturity. This book is not a quick read.

So far, I have learned that, in spite of my recent breakthrough, I’m still a ways off from my big dream of financial security.

In fact, I am just barely moving out of stage 2.

The first two stages happen in a figurative childhood phase. I say figuratively because you don’t have to be a child to be in this phase. You just have to be child-like. It’s about a state of mind.

Stage one is Innocence, and stage two is Pain.

Can I get an amen?

Kinder writes: “Most of us recycle between Pain and Innocence in a way that prevents us from moving forward toward Money Maturity.”

I got that. For example, in my youth, I believed that there would be plenty of time for me to save for retirement and that I might not ever have kids so there wouldn’t be a need to save for college for anyone. That was Innocence.

When I got to age 39 and had my first child, and still didn’t have anything set aside for retirement, I realized I didn’t have the resources to stop working even for a few months to devote my full attention to my baby. That was Pain. But we got through that, and I had a good business going, so I was sure it would all work out. Innocence.

Then the second baby came along at age 43 (me, not him), and I still hadn’t started saving for the first child’s college fund. At that point, I realized saving for retirement was probably moot because I’d be working until I dropped. Pain.

And the cycle is just as pernicious on a small scale as on a large one. Like at the grocery store, when I spend too much on groceries because I’m “positive” I’ll get a check in the mail by the end of the week (Innocence). Then the next day my client calls to say she can’t pay me until the middle of July (Pain).

Most Americans are Stuck in the Financial Cycle of Pain and Innocence.

The economy booms, housing prices soar, and you take out loans you don’t really need and don’t know exactly how you will pay it back in full (Innocence). The economy slows, housing prices crash, and there’s no money to make the loan payments (Pain). But the economy always gets better, so if you can just hang on another week, another month, another quarter… (Innocence).

America commonly refers to the economy as a cycle, and you accept that it moves from boom to bust and back to boom. You are programmed to stay stuck in this cycle in a way that prevents you, as individuals as well as collectively, from moving forward toward Money Maturity and financial stability.

How do you Break the Pain and Innocence Cycle?

It’s all about awareness. First, you must recognize that you are cycling and recycling and that cycles are fundamentally stagnant, not forward-moving. It’s hard to do this when one is in the innocence phase because innocence feels good, and why question a good thing? Pain is a much better motivator.

When you are in pain, the pain is a signal to wake up. It’s uncomfortable, and you’re in a rush to get out of it.

But Kinder suggests that instead of narcotizing pain by choosing to cycle back to innocence you should wake up to the fact that cycling back to innocence is only a set-up for more pain. It’s like taking an aspirin to quell a toothache: ah, the relief. Three hours later: oh, the pain.

Perhaps it’s not an aspirin we need, but a dentist.

I’ve become aware of my Pain and Innocence cycle, and I’m working on using the Pain to propel myself out of it. What’s next?

According to Kinder, I’m ready for the first of the three stages that happen in the adult phase of money maturity: knowledge, understanding, and vigor.

And while I study these next three stages, I’ll leave you with some advice by George himself.

Jayne Speich is a small business coach and E-Myth consultant who writes thinks and coaches extensively on customer service, business finance, and ways to thrive in the new economy.

« New And Improved Dream For Product Reviews
How To Get Unstuck and Gain Momentum: Clear Your Dream Environment »