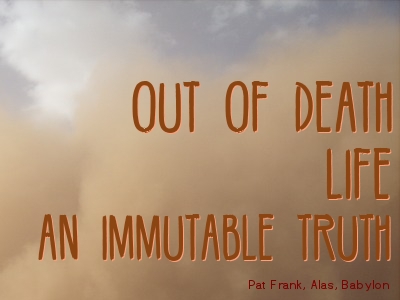 For the last month or so, as I work on my big dream of financial success, I must confess that I’ve been working in a seasonal sales job. It’s been an interesting re-entry to the world of working for someone else, instead of for myself.

It has me wondering, what if all my money dreams have turned to dust?

Rethinking one’s financial outlook is true for 100 or so people I presently work with.

The people I work alongside are all ages, from the young man across the aisle who was just sworn into the Army this week, to the guy sitting next to me who was laid off his dream job after ten years and is still reeling from the shock.

There are people who have made a lifestyle out of working seasonally; they work from March through August, and when the season ends they go on unemployment or go back to school or live off their savings until March rolls around again.

There are other people, like me, who are just passing through.

It’s a different way of thinking about making a living, and I’ve had some interesting conversations with my coworkers as they exit. On Friday, someone came by my desk to say goodbye because he’d just been laid off.

I was on my way out for the day, so I walked him to his car. I asked where he lived, and when he told me the name of the lovely beach town–the one I’ve dreamed of living in myself–I said, “You’re so lucky.” He replied, “Not lucky. I have to work really hard to live there.” Then he commented that he wished he could find steady work again, but that after the crash of 2007 the best he’s been able to do is piece together a patchwork of jobs.

But then he said he looks on the bright side. “I used to be part of the rat race, but now that I’m not anymore I realize that even if you come out on top of the rat race, you’re still a rat.”

Cynical, yes; but I’ve had a version of that conversation a number of times with other people.

They (we) don’t have pensions.

We aren’t in the stock market.

Our homes are not an investment (at least not a very good one).

We are losing assets like old skin, and learning a new way to live in the aftermath.

Compared to how it used to be, it’s harder to live this way–leaner, more white-knuckle than many of us are used to. But it’s starting to have its rewards too. It’s starting to teach owning stuff is not all it’s cracked up to be. That working in a job is not the definition of who you are and what you can contribute to the world as human beings.

That you are endlessly more creative than you thought you were, back when it used to be easy to pay for whatever you needed. Now it’s not so easy, and you have to rustle up what you need. And doing that has its many rewards.

Your money dreams may turn to dust, but out of the dust a new and better lifestyle dream can be born.

On the global scale, I often wonder what it would mean for the money dreams of whole cultures and whole governments were to turn to dust. I think it’s possible that human beings would rise to the occasion, and already are rising to the occasion, rather than allowing themselves to be run over by the bus. And lest you think I’m starting to sound like a progressive, nothing could be farther from the truth.

I don’t believe we should allow the weakest among us to be trampled while those with means survive to see another day. Part of rising to the occasion means having open and frank conversations about how we survive together, not shutting out the have-nots in an economic rationalization of survival of the fittest.

Back in the 1960s, a guy named Pat Frank wrote a novel called Alas, Babylon, envisioning what would happen in the aftermath of a nuclear attack. It’s a fascinating book, kind of like a time capsule from the high point of the Cold War. There’s lots of stuff in it that is dated and politically incorrect, but it has a curious resonance with the economic world in which we now live.

One of the themes is that when money is useless–because there’s nothing to buy–people shift their focus from competitive individualism to cooperative community.

Sure, some people get greedy and participate in looting and pillaging, but they come across as pathetic because they’ve missed the point (and they also get radiation poisoning, a kind of damnation for their folly).

Diamond rings hold no value anymore, except to the few people who are hoarding them. Brand new televisions and big luxury cars are meaningless to everyone but the guys who are stealing them. Status is pointless. Instead of all that, what matters is: what talents do I have? How can I play a part in rebuilding society?

And instead of “What kind of job to I have to hang onto in order to keep my stuff and my status,” the question is, “What kind of life do I want, and how do I go about rebuilding it without also rebuilding the parts that don’t mean much to me?”

And, although crudely stereotypical in some ways, Alas Babylon also reminds us that just because some people are poor and have no assets does not mean they have nothing to contribute.

Being poor is not equivalent to being useless and disposable. In fact, rebuilding society needs more people sharing the work–not just a few people sitting on top of the pile of rubble.

The world used to move so fast and caught us up in it so much that, like rats, we ate when we weren’t hungry, scavenged when we had no need, and hoarded what we might never use. Maybe we had our own metaphorical case of radiation poisoning.

But now the world has changed, and with it, will my big financial dreams turn to dust?

What will I build instead?