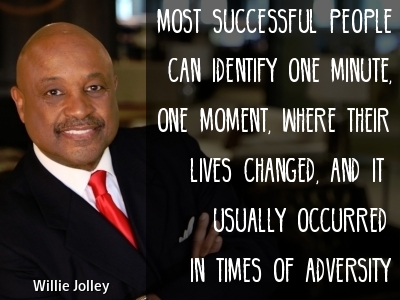 As part of my big dream to improve the financial security for my family and me and put aside my old, bad money habits, I decided it was time to talk to professionals about the subject of money mastery and to create a successful financial life.

This week, I sat down to interview author, radio host, speaker, singer and media personality, Willie Jolley, about his messages on making money and making it last.

If you aren’t familiar with Jolley’s work, I can tell you he is an inspiration. He’s perhaps best recognized for his book; A Setback is a Setup for a Comeback. He’s known for adapting his success message to pinpoint other areas like money and work.

Jolley has also authored several other internationally best-selling books including, An Attitude of Excellence: Get The Best From Yourself, Your Team, and Your Organization, It Only Takes A Minute To Change Your Life, Turn Setbacks Into Greenbacks, which was endorsed by the late Dr. Stephen Covey and former Ford CEO, Alan Mulally. He is also featured on the front of the top-selling book, Chicken Soup For The Christian Soul II. He even wrote a popular marriage book, co-authored with his wife of over 33 years, Dee Taylor-Jolley. The book is entitled, Make Love, Make Money, Make It Last! (Source: WillieJolley.com)

Willie began the interview by reminding me that the economy is everyone.

Economics is at least partly a behavioral science. Market pressures are created by the way we react to the news, handle our setbacks, and conduct ourselves in challenging times. If we as individuals can become productive and positive in our thinking, that will spill over to our actions, and that, in turn, will create positive forces in the markets.

And by the way–Willie Jolley is not just talking.

He can prove that attitude shows up on a company bottom line. He’s credited with contributing to Ford Motor Company’s comeback from its 2006 setback to its 2010 billion dollar profit as the only American automobile company not to take a federal bailout.

How did he do it? By talking to Ford employees about turning setbacks into comebacks.

“You see,” Willie says,  “attitude really is everything.”

7 tips from Willie to Turn Financial Setbacks into Greenbacks

1. Don’t panic.
When you face financial difficulties, it’s scary, and your first reaction is often panic. But panic is fear-based and leads to irrational decisions. Willie says he can see fear at the roots of many of our current economic problems. People are clinging to money out of fear, which causes demand to drop.

Since demand is an engine of the economy, businesses respond by producing less and laying people off or not filling job openings. That keeps unemployment high, which makes money even more scarce.

2. Don’t buy into doom and gloom.
“Don’t participate in commiserating,” Willie told me. Remember, this too shall pass. It’s vital to turn away from gloomy economic news because it can harm attitude, and that can make you feel jittery and lead to panic.

Remember to breathe and turn a deaf ear to fear-producing, sensational news.

3. Don’t let pride poison your prosperity.
This is a big one for many of us. Not having money can be embarrassing, so we try to keep up appearances. We hang onto a car or a house we cannot afford and only deepen our financial distress in so doing. Or we don’t take a job that isn’t up to our standards, out of fear that others will think we’ve stooped too low.

Willie told me about a friend who had started a business and found himself in a downturn.

During that period, he worked in his business during the day, then went to a second job hauling garbage at night. He wasn’t ashamed he was doing what was necessary to keep his business alive, and he was proud of it. The downturn passed, his company recovered and thrived, and he quit the garbage hauling job.

Willie says, financial setbacks aren’t personal, and they’re not permanent. Do what you have to do to get through them and don’t work about your pride.

4. Don’t stop thinking about the power and possibilities of the future.
Sometimes we can be so focused on surviving today that we forget the future is always on the way. Willie told me, “If the dream is big enough, the problems don’t matter.”

Even when you are struggling financially, dare to dream big enough to make the struggle worthwhile.

5. Be proactive.
“Don’t wait for your ship to come in,” Willie advises, “Swim out to meet it.” Being proactive is one of the hardest parts for many people (especially me). Has anyone else ever avoided going to the mailbox to avoid finding more bills?

How about ignoring that check engine light to avoid spending money on car repairs?

Yeah, I’ve got a few of those–and they never pan out the way I hope they will. They always get to the point that forces me to react when I could have taken the opportunity to be proactive and saved myself a lot of grief.

Face your financial problems. Look them square in the face.

6. Be creative.
If you’re out of work and you can’t find a paying job in your field, be willing to do something unusual, like a volunteer. Willie tells of a young man he knows who volunteered to do a job for 60 days without pay to show what he could contribute.

He made the most of 60 days, looked for ways to add value, and made sure to show a consistently helpful attitude. At the end of the 60 days, the job was offered to him on a paid basis.

“Be creative, be excellent, and be exceptional. People will look for ways to keep you around.”

7. Be prayerful, even if you’re not religious.
“It’s about HOPE,” Willie says. “Ninety percent of people give up too soon. But the cavalry isn’t coming. We’ve been conditioned for years to expect to be saved. No one is coming to save us; we have to save ourselves. And there’s something about hope that inspires us to do that.

So be prayerful and hopeful.”

I asked Willie what he thinks we most need as a culture to return to prosperity. He cited willingness to delay gratification. “In good times, it’s easy,” he said. “But in challenging times, it’s not so easy. We need to have the willpower to work hard even when we don’t immediately see the benefit.”

“Add value to everything you do,” Willie advises. “Develop your skillset and be willing to use it. Work hard for what you want.”

If you haven’t heard Willie Jolley speak, here’s his TED talk on setting yourself up for a comeback:

Willie Jolley encourages you to dream big even when your financial life feels like it’s killing you. You will have setbacks, but you have to keep swinging and stay in the economic success game.

« Website Launch Review: Get Your Designer Fix At The Foundary
Warning: The Stuff That Gets In the Way of Our Dreams »