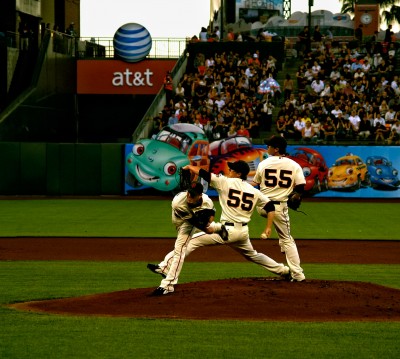 At the start of every professional baseball season, all 30 teams have the same Big Dream — to play on the national stage and win the World Series.

This year, The San Francisco Giants are one of those teams.

But their winning season was hardly an obvious bet. Their path to the championship was long, tiring and unpredictable. As a fan, it was torture.

To make the playoffs they had to win their very last game against their big rivals.

They’ve struggled throughout the entire season, fighting against their player’s age, lack of playing experience, and maybe the biggest obstacle of all — the baseball reporters and experts who have not “bought in” to The Magic of Giants Baseball.

That doesn’t seem to bother any of them all that much.

As a fan, I’ve seen the team go from underdogs to possible world champions in a matter of eight months.

Watching games and listening to press conferences, here’s what noticed about the underlying success of their dream team:

Baseball games can look pretty haphazard and unscripted — almost like they just go out there and leave it all to chance. But hardly anything this team does is unintentional. There are game plans, back up plans, and contingency plans for when the original plans don’t execute right.

2. They make a bunch of little gains and keep the big picture in mind.

Each game is important, but its obvious they’ve embodied the cliche “we’ll just play them one game at at time “ They paced themselves, knowing it’s a long season. That patience has made the difference — because they are now in the World Series.

3. They push themselves to get better throughout the season.

4. They take days off to rest physically and mentally.

They understand the importance of rest and repair, and how it makes them stronger. Many of the players are friends off the field as well, and their support and camaraderie shows up at game time.

5. They make errors and get over it.

Let’s face it. Mistakes happen. And in baseball, there can be lots of errors. The veteran players have made it a point to help the newer guys learn from their mistakes, shake it off, and keep playing. Leadership of team and of self plays a HUGE role in this being successful.

6. They practice to make progress.

As with any thing we want to master, we have to build skills and best practices, and do them over and over until they become routine. Pitcher Tim Lincecum is our 2 time CY young award winner at age 26. He contributes his success to his pre and post game regimens, something he’s practiced since his little league days.

Remy’s dream is creating opportunities for photography showings and public displays of her work.