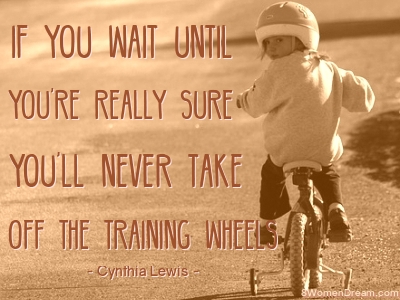 If you take the time to look back over your life, you often see that the big dream moment you’re experiencing in the present was actually a myriad of small decisions made in the distant past.

Often-times, those little decisions are barely noticed at the time.

Sometimes it’s less a conscious decision and more a piece of advice or encouragement that comes your way. Following that little bit of support changes the course of your life in sometimes small and sometimes monumental ways.

My big dream actually started when my dad taught me to ride a bike.

I was older than most kids, but I still couldn’t ride my bicycle without training wheels. Why? I was scared. I was afraid of falling, but that’s actually not true. Kids fall. I’d probably fallen hundreds of times in my child-life.

So, what was I afraid of?

The sad thing was that I loved riding my bike. Pedaling as fast as I could and then coasting down the street, my friends beside me doing the same thing was pure joy! But I was getting too old for training wheels, so I rode my blue bike with the long banana seat less and less. 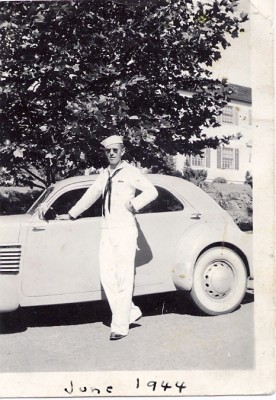 I didn’t talk to my parents about my fear. I didn’t speak to my friends about it. One day, as if my dad had read my mind, and he wasn’t going to allow fear to keep me from the joy of riding a bicycle, he told me to follow him. We went to the garage, where he took a few tools off his workbench.

To my dismay, he rolled my bike out on to the driveway and proceeded to remove the training wheels. Dread rolled over me like a tidal wave. I was confident that without the training wheels on, I’d never be able to ride my bike again. I became so sad. I turned to walk away.

“Where are you going?” Dad asked.

I looked at it. It was impossible. My heart pounded.

“I’ve tried. I’ve tried to balance without the training wheels touching the ground. I can’t do it.”

“Oh, those wheels just make it harder,” he said. “You’ll do better without them.”

Dad aimed the bike with me on it, down the street. He held onto the back of the banana seat, steadying it. He gave me instructions and then ran behind me as I pedaled. I could feel his strength holding the bike upright. I glanced back to see him running behind me.

He let go, and the bike leaned sharply to the side, but he caught it before I fell. He repeated this over and over. The bike fell to the side, me on it, every time he let go. It was my worst fear realized.

It was getting dark.

“Yes, you can,” he insisted. “This time, I want you to focus on the Prickly Tree (giant blue spruce halfway down the block).“

I felt sorry for him. He was putting so much effort into this. So, I decided to try one more time.

I’d sailed down the block with my dad behind me. Or so I thought…

My dad wasn’t there. He’d let go of the bike. I was riding on my own. I made it to the Prickly Tree, then stopped and looked back. Dad was back at the house, standing in the middle of the road with his hands on his hips.

40-plus years later, I got to return the favor. 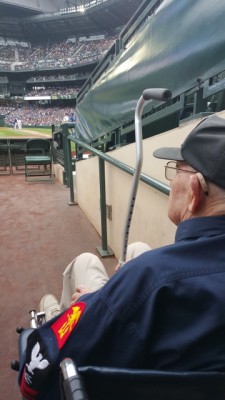 An Amazing Dream Moment 70-Years in the Making

My father was chosen to be honored by the Seattle Mariners professional baseball team for his service during WWII.

On the day of the event, the stadium allowed one person to go down to the baseball field with him. So, during the 4th inning, I stood next to my dad in the breezeway just steps from the field.

Since there was a lot of walking to get down to the field, he’d used a wheelchair with a kind attendant to push him.

I leaned down close to his face. 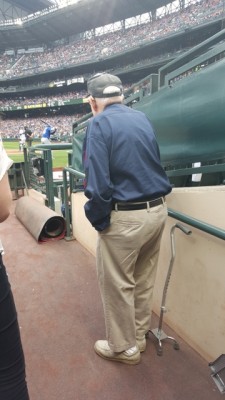 “I’m nervous,” he said. “Is this really happening?”

I put my hand on his back.

He stood up and leaned on his cane as player #35 went up to bat.

Moments later, a red carpet was rolled out, and my father walked out, leaving his cane behind. As the story of his service during WWII was told over the speaker system, and photos of him were displayed on the giant screen, he waved at the crowd. 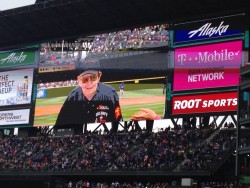 Then it happened. People began standing. All over the stadium, more than 40,000 people rose to their feet–all clapping and cheering.

My father, who never expected to be recognized for his service, who kept his stories deep inside for more than 50-years, was finally getting the recognition he so deserved.

He reveled at the moment. As he walked back to me, people in the bleachers nearby yelled, “Yeah, Murray!”

He waved, shook a few hands.

Life is funny. We never know where the smallest of decisions might lead. Thirteen years ago, my father handed me two notebooks full of letters that he’d written to his “folks” during the war. That unassuming beginning would eventually become a book I’d end up writing and publishing called, Breaking the Code: a Father’s Secret, a Daughter’s Journey, and the Question That Changed Everything.

From the moment my dad handed me the notebooks until now, a thousand other little decisions were made; some of them mine, others his, and still others made by random people along the way; the women in a writer’s group who encouraged me to pursue my book publishing dream, the editor that “got it”, and the publisher who took a chance on an unknown author.

All you can do to launch your dream is to begin. All you can do is make that small decision to start. It takes faith to do what you are meant to do. It takes courage to follow a dream that makes no sense to you and seems utterly impossible.

But merely making the first attempt is what will make your impossible dream possible.

When I learned to ride that bike, I never dreamed I would be a part of my father finally being recognized for his role as a code breaker during the war or writing a book about his war experience. But a thousand tiny decisions later, that’s precisely what happened. You just never know what will launch your dream journey in the years to come.