This past weekend I got to check another item off my “finding happiness” bucket list: making a movie! Well, starring in a movie scene or two at least, which counts in my book!

Making movies is a complex business, and it’s a fun way to get to collaborate with lots of creative people. The cast and crew for just a few scenes included a few dozen dancers, musicians, camera people, and set-up crew.

I was one of the dancers for Life on the Run, which is an independent film about making art, and about people’s need to be creative, despite the challenges that can be inherent in the artistic life. 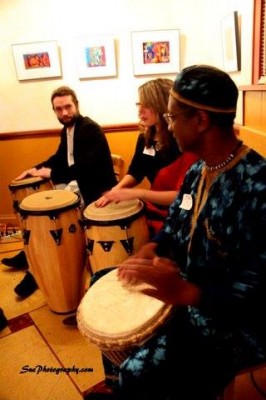 Life On The Run!

The call for the scene came in a week or so beforehand. I’d been alerted that it would be coming by the filmmakers, who are friends of mine.

We met several weeks back to talk about my role in the film, and what I could bring to it as a dancer. I will likely still be shooting some more scenes soon which include  dancing with sparklers and maybe even using some fireworks!

They got inspired to include some “live fire” elements since I have done some live fire dancing, and my burlesque dancing name is “Flame Marilyn.”

The scenes that I got to participate in this time included some group dance floor shots featuring live musicians. There were wonderful drummers, a guitarist and a bassist.

They played joyful songs with an Afro-Cuban beat, and a dozen or so of us danced. There wasn’t any choreography or script, and we were just given free reign to move in whatever ways felt good.

Some dancers moved together or imitated each other’s movements, and some of us just did our own thing. We danced joyfully for a long improvised scene, and worked up a sweat.

The best thing about the scene was how uninhibited everybody was, and how unselfconsciously everyone danced. I love the quote, “Dance as if no one is watching,” and that’s what everyone truly did.

It was just pure joy on the dance floor! We laughed, played, improvised, and just kept on moving happily.

I really didn’t pay much attention to the presence of the cameras. I just felt like I was at a big dance party with some good friends, loving life and living it fully!

The movie director has a beautiful tradition that he uses to set the tone for a scene. Before the cameras are rolling, once the actors and crew have all assembled, he has us all gather in a large circle.

Everyone shares their intention for the scene and for our time together in two words. Well, many of us extrapolated and shared it in many more words than two.

I dedicated the first scene to Nelson Mandela, and to the spirit of peace and joy, globally. I shared his quote about how it is music and dancing that make him feel at peace with himself, and with the world.

I love it that this great leader lived with so much joy, and that South Africans, in celebrating his extraordinary life, have been dancing and singing in the streets.

It was beautiful to hear everyone’s perspective, intentions and sharings.

The idea of the OPA Circle is to powerfully create together and to be very intentional about what we are creating. You truly could feel the energy and spirit of everyone’s good intentions as we danced so joyfully to the live drum beats.

I felt so connected to everyone in that room. Everyone’s light was truly shining and everyone looked so beautiful to me.

That in fact was my intention in the second circle, which was held after some new dancers and actors had arrived.

I said that my intentions were for us all to dance once again as if no one was watching, since that spirit of pure joy was so present in the scene the first time through.

And, I set the intention that we all shine our lights brightly, so our inner beauty shines through. Everyone in the room truly seemed to be glowing with a bright inner light.

There were more dancers on the floor than in the previous scene, and we filled the space that had been occupied by the musicians previously.

The energy was a bit different when dancing to a live recording, yet it was still upbeat and felt festive. We danced and goofed around and moved to the beats of the recorded drums. 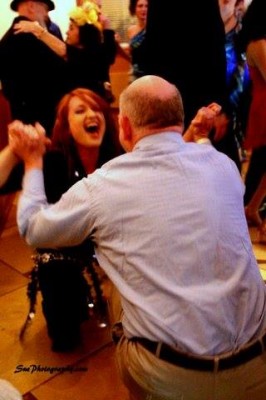 I got to do a dance with the “star” of the scene, an older gentleman who is “awakened” to joy when he is approached by a beautiful young Latina dancer, who dances with him seductively. Amazed, laughing, and overflowing with the spirit of life, he then starts dancing with other women, making his way around the dance floor joyfully.

It was fun to dance with “Bill,” his movie name, and to see him laugh and smile. He did a great job acting the role of a withdrawn and isolated man brought to life by dancing, music and beauty.

At the end of each scene, the directors really would say, “It’s a wrap!” and take a picture of the scene number. So much of it was just like what I’d envisioned, and what I’d seen on other movie sets when watching a movie being filmed before.

I’ve watched a few movie scenes being filmed in the past, including a scene from The Time Machine that was filmed here in Troy, NY where I live, and one from The Pursuit of Happyness, filmed in San Francisco.

The biggest difference I noticed between watching a big budget movie being filmed and an independent film is that in the big budget films they might film one scene over and over 20 or more times. It felt more tedious, only because the demand for “perfection” in the final scene is higher.

This independent film felt more organic and spontaneous, and while there was still a high standard of excellence, it didn’t require us to shoot each scene twenty times. Just two!

To All Artists Who Live Your Dreams!

I loved participating in making a movie. I will keep you posted, dear reader, on the next steps as we film more scenes and as the film is produced and distributed.

Here’s to all artists of all kinds who have the courage to live your dreams!

« Dream Fitness Tip: Get Fit Over 40 if You Ignore These Lies
Turning Obstacles Into Stepping Stones: Dream Photography Studio »