You Are Here Home » WRITE WITH US » A Father’s Dream: To Have Happy Children

How manyÂ friends have asked me how I managed to turn out so normal?

Like a lot of kids growing up in less than perfect circumstances, it was the love of one relatively normal adult that

That was my dad.

He built Â my brother and me a huge coaster once. That’s my brother’s friend Lumpy on the back.

Our dad installed a thick black car steering wheel that we could barely get our midget hands around.

Then he showed us where the “break” was. It was a hinged board under our feet with hard rubber nailed to the underside.

That coaster was six feet long, made of wood salvaged from his print shop. Packing crates, that sort of thing. My dad hammered thick sheet metal fenders to the front and top.

I’m saying, it was heavy.

It picked up speed on hills. It went so fast (even on little hills) that it scared my brother and me. After a couple of blood chilling plunges, we pushed it back home to ask again – – was it really safe?

“Sure!” he enthused. “I made that thing solid.” Then he waved us off again, like a race car pit boss, refusing to let us refuel or check our tires.

We must have hesitated because he added, “Look, if you’re really worried, have a kid stand at the bottom of the hill and stop any traffic that comes along.”

That was my dad.

He told us our family motto was Ignorance & Confidence, which translated into — try without worrying about the outcome so much.

My big brother and I grew up in San Francisco in the ‘60’s. So many of our childhood disasters revolved around wheels picking up speed.

I suffered the wrath of my mother for weeks after I scraped off the toes of my new red patent leather Mary Janes; riding on my belly, head first, on Frankie Fragamenni’s new Flexi. (Can you see them in our first photo?)

My brother crashed a brand new Schwinn into a tree, knocking himself out. For weeks afterwards, he gamely claimed amnesia when questioned about the status of his household chores.

One time my brother decided to strap on skate boards, one on each foot, like snow skis.

“Would it work?” My brother asked my dad.

“It might. But how would you stop?” dad wondered, looking up from his newspaper.

My brother was pretty sure you could stop that same as you would just using one skate board. You just sort of turned your feet in until you reached an angle that defeated forward movement.

Since my brother had the practical skateboarding experience that my father did not, dad deferred to his judgment, turning back to the news.

My brother strode offÂ with two skateboards under his arms, two lengths of rope and me to act as the traffic look-out.

I was a good traffic look-out too, I insisted all the way to the Emergency Room.

“You said you could stop!” my dad hollered from the front seat of his car as he ran yet another badly placed stop sign. “At least stop crying!” 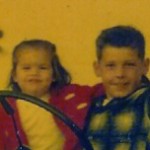 I was a funny looking kid. Of course, a funny looking little kid never knows it if they have at least one kind parent. My dad used to tell me that nobody can resist a joyous woman.

For some reason, knowing that made me feel sort of joyous.

It was like he let me in on this cosmic secret. You could make it with enough joy.

As I grew up, struggling in high school, looking for work as a teenager my dad would cheer me on, saying “Somebody gets to work for the New York Yankees, why not you?”

My father was a cool cat. A character. A good egg. He was kind, gentle and funny. He’s been gone for 15 years now, but he’s all around me and always in my heart.

He was an artist, but didn’t know it.

A couple of days beforeÂ his second brain surgery I found a note in my mailbox. It was his rules for a happy life in a child’s scrawl on yellow lined paper.

After his first surgery he had to re-learn everything including writing, so some letters faced the wrong way, but I got it.

My dad also told me to always throw a big bill down on a bar and let the bartender reduce it over the night.

“That way, he knows you’re not an amateur,” he’d say with a wink.

My parents divorced when I was nine and in those days when your dad left, you only saw him on weekends and birthdays. Somehow my dad managed to instill a lot of optimistic qualities in us both nonetheless.

We were both jelly-side-upÂ kids. Kids that fell seven times but got up eight.

He was one of those adults that instill so many good qualities in kids without really trying. On bad days, he’s the voice I hear encouraging me.

He created a joyous woman.

I’d love to hear from you about the adult who helped you growing up. These stories never lose their power.