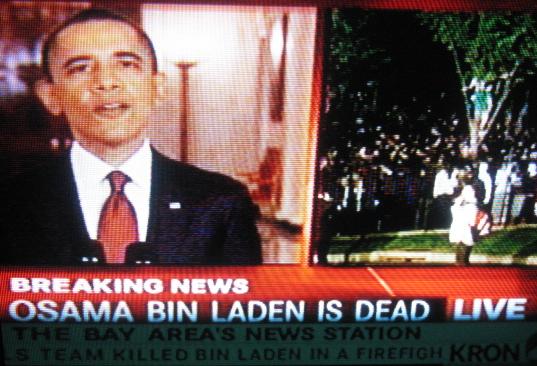 When one thinks of a successful dream, rarely does one think of death. But there I was sitting on my couch with my son watching the end of 60 Minutes when the program was interrupted to announce that President Obama was about to inform the world that Osama Bin Laden was killed.

“Oh my God!” I said aloud as my son and I looked at each other in disbelief.

We were instantly glued to the television. It felt like some cruel joke. Could it be true? Was he finally dead? Will America finally get the closure it’s been seeking ever since that fateful September day in 2001.

9/11 is one of those life events where everyone remembers exactly where they were when it happened. It was as if the entire nation came together in a shared tragedy, then fell into shock, followed by anger and a slow crawl forward into a new century.

And Osama Bin Laden was the elephant we carried on our united backs.

Would we ever see him brought to justice?

As the President’s speech finished I could hear myself breathe a long sigh of relief. I don’t even know where that breath came from, but I felt the elephant sliding down off America’s collective back. My son began to laugh and run around the living room, and I realized that he’s a kid who’s grown up in the shadow of 9/11 and terrorism — much like I grew up in the shadow of the Vietnam War and the Cold War.

How I’d forgotten, as a little girl I dreamed of the day we wouldn’t have to hear about the Vietnam War on the nightly news — then how I dreamed of the day I could stop worrying if someone was going to “push the button” and start WWIII. We forget how war-talk tears at the souls of kids.

I remember where I was when I heard the Vietnam War was over. I remember how happy all the children were at the school and how we laughed and played — overjoyed that the war had ended.

And there was my 16-year-old son jubilant at the news that Bin Laden was dead, just like I was on that playground back in January of 1973 when the President’s voice announced over the loud speaker the end to the war.

When President Obama’s speech ended, the TV quickly changed to images of people gathering in front of The White House and flocking on to New York streets in celebration — it was an American dream come true.

My neighbors gathered outside their homes, as if wanting to reach out and say, “look, we did it — we got the bad guy!” It felt like we should be drinking champagne and marching downtown to some sort of parade.

Surreal feelings since we would be celebrating someone’s death.

I wasn’t born when it was announced that Hitler was dead, but I can now appreciate how that must have felt for my parents and my grandparents. Sometimes dreams are bigger than you.

Sometimes they involve an entire nation.

« Travel Dreams: What To Pack For a Memoir Research Dream Trip
My Royal Wedding Dream Fascination Crashes into Post-achievement Blues »