You Are Here Home » BE A MOTIVATIONAL SPEAKER » Women Say Hello To Your Next Superhero: Big Hair 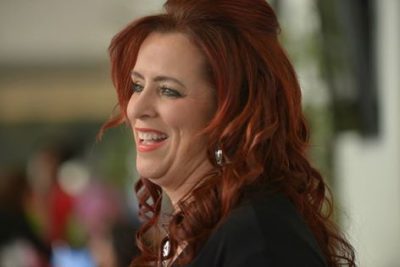 Staying On The Funny Side Of Big Hair

Okay. So I’m known to exaggerate. I’ll give you that. But this time I’m pretty sure I’m not.  I could have been killed.  And I have my hair to thank for saving my life.

I was on a flight from somewhere to somewhere else (they all run together) and we had landed and begun the disembarking process.  I was already exhausted from having gotten up at 2 am to make sure my hair and face looked perfect, in case I died in flight. I don’t want somebody else doing my makeup.

I officially was–as my friends have nicknamed me–camera ready.  I was also cramped from having to fight sleep for two hours, sitting up (leaning back messes up my hair). I can’t fall asleep or else I will start snoring. Last time that happened, I slept through half the plane disembarking while I snored like a freight train. I made it on fourteen Facebook live videos that day. And I’m proud to say my hair looked great.

I was also cramped from having to fight sleep for two hours, sitting up (leaning back messes up my hair). I can’t fall asleep or else I will start snoring. Last time that happened, I slept through half the plane disembarking while I snored like a freight train. I made it on fourteen Facebook live videos that day.

And I’m proud to say my hair looked great.

So back to this moment. I’m sitting there waiting for the ding. If you travel, you know the ding.

The moment you hear that ding (real or imagined) that tells you to unbuckle, people who have been in a coma for two hours suddenly spring to life. It’s like the firing shot at the Kentucky Derby.  The goal is to get off that plane as fast as humanly possible, and for some, if that means stepping over others and not following the rules then etiquette be damned. (Wait your turn! Hello? Did you not go to kindergarten?)

Apparently, some people feel their time is worth more than others, and the rules don’t apply to them. And don’t give me any crap about a tight connection or you don’t feel so well. We all know you’re lying. And we all saw you using your cell phone the ENTIRE time we were in flight.

That’s why I often choose the Exit seat because I want to make sure YOU get off last.

As you can probably guess, I’m a rule follower. I follow written rules, implied rules, and rules I think should be rules even if nobody else does.  Add to that–I was born in the south to a long line of women who would rather die than break in the line or appear impolite. It also tends to turn certain southern women (especially as we age) into official members of the rules police. If we follow the rules, then by golly you will too.  We spend a great deal of energy making sure everybody is doing the right thing.  I once saw a genteel southern woman sitting at our airport gate, turn into a raging beast when she caught sight of another woman daring to bring on more than her allotted carry-on amount.  With every passing moment, this self-appointed-rules-officer grew more and more agitated that nobody was addressing this situation.

We spend a great deal of energy making sure everybody is doing the right thing. 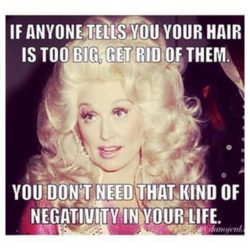 I once saw a genteel southern woman sitting at our airport gate, turn into a raging beast when she caught sight of another woman daring to bring on more than her allotted carry-on amount.  With every passing moment, this self-appointed-rules-officer grew more and more agitated that nobody was addressing this situation.

First, she tapped her foot impatiently. Then she whispered to her husband and pointed to the rule breaker. Then she turned to her neighbor when her husband finally faked sleep to get out of the conversation.  Then she began to pace until finally she stormed over to the gate attendant and demanded in a loud whisper that they do something about this. I tried to remember the CPR class I took in high school because if anybody was headed for a heart attack it was this woman.  I felt sorry for her, told myself I would never get that bad and was secretly pleased that the woman with too much carry-on was being called out.  It didn’t help that she then transferred ALL her belongings to one giant black trash bag that would NEVER fit in the top compartment.

Sigh. Thanks to airports, I am reminded that I am the new smart. And apparently the new skinny.

So back to this moment where I sat waiting patiently for my turn to disembark, and trying not to stare, which is quite hard to do on a plane. I’m just saying. 50 shades of crazy, and they were all on my flight. You’ve probably seen your share of cray-cray. The airport is their mother ship.

There were still a good ten rows of people ahead of us, waiting to get off, but apparently, the guy behind me decided he could not stand another minute without his beloved laptop.

This laptop happened to be housed in the bin above my head.

I’m sitting there politely smiling and waiting my turn, in the aisle seat, when I feel this guy mashing the back of my head to reach up over my seat and into the bin above.  He is not in the aisle reaching over, which is the rule. He is in the middle seat behind me. This is not allowed. No matter who you ask.

If you want to see me go from smiling politely to raging beast, just brush up against the back of my head that I have now spent about six hours trying to protect. My head bobbed forward and my eyes turned red as tiny fangs started to pop out in my teeth. But I didn’t turn around to give him a look because I’m from the south.

The guy continues to struggle with the bin above my head while the rest of the people in the aisle pretend like he doesn’t exist.  Apparently, you don’t help a passenger unless she’s ninety–and some not even then. He finally pops it open, with a few more grunts and another bump to the back of my head, without so much as an excuse me.  My nostrils flared and my breath began to quicken.

I was on the verge of actually turning around and giving him my “look” when he finally gets hold of his laptop and pulls it out.

It happened really fast. And yet it felt like it happened in slow motion.  He reaches up, grabs the laptop, starts to pull it out, and his fingers … start … to … slip. He loses his grip on the beloved laptop and it goes spiraling down.

You know in those cartoons when the roadrunner is running around and the boulder falls off the cliff and hits him on the head out of nowhere?  Yep. Call me road runner.

That giant laptop spins and corner side down bonks me on the top of the head and then bounces off while the guy behind me dove to catch it. And then pandemonium ensued. People screamed. The guy starts cussing, “Shit! I’m sorry!  I’m sorry! Are you okay?”

I don’t remember the next couple of minutes.  Things were kind of fuzzy. All I could see were concerned faces distorted and tinny sounding.  “Are you okay? Are you okay?” they kept asking.

Wrong question. IS MY HAIR OKAY? That’s what matters.

This is the hair I will die in–and apparently, that moment is now.   My head was exploding in pain, but thankfully it did not break the skin. Thankfully I did not have a concussion. Thankfully I was still conscious because no southern woman wants to pass out on the off chance she might not look her best when she does.

That laptop had to have weighed ten pounds, and it made a fast fall, with my head breaking it. I should have been hurt worse. I could have been killed But I wasn’t. And I have one thing to thank. 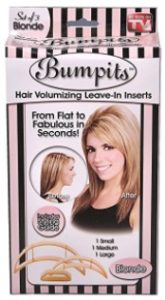 What’s a Bumpit? Hello? Have you never watched infomercials? Did you not see the greatest invention of all time guaranteed to give you 80s hair in minutes?  Adds two inches of height to the top of your head.  Held in with Velcro that could sustain tornado winds of up to 80 miles an hour. This was the greatest invention since the Chia Pet.

I own six of them. You know, just in case they stop making them.

The other people on the plane thought it was a miracle that I wasn’t hurt worse. I let them think that because a lady never reveals her secrets.

Now … if I had just been wearing my new spandex butt padding (to give my butt a more youthful lift) the day I fell down those stairs. The story would have a whole new ending.