You Are Here Home » STARTING OVER MIDLIFE » Women Starting Over – Say Hello To Your New Boss: Home Remodeling 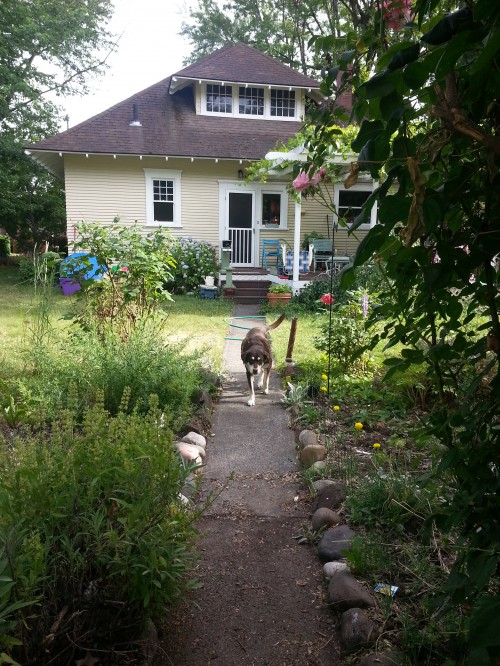 Note the trees looming over the house (and the darling dog).

It was a momentous day. At last, I signed the final papers. The 105-year old Craftsman bungalow is all mine – mortgage and all! I now own my house!

I thought of all the things I should do to make it a special occasion, all of which included other  people in the celebration. But in the end, it was just me, going into the title company and signing a stack of papers.

The past two years have been a storm of emotions – and like the weatherman, I never seem to be able to predict how I’ll feel. And this experience was no different.

I thought I’d be scared, that I’d worry I’d made the wrong decision. Instead, I was like a little kid on Christmas morning. When I walked out of the title office, my heart pounding with excitement, I could have just squealed with joy.But I used self-control (this time) and managed to not do that.

But I felt it. Pure joy.

Since I already live in the house and have for about six months, you’d think that the signing would have just felt like a formality. It didn’t. I drove home, walked up the path you see in the photo above, and I just wanted to hug my little house.

I walked up the steps and said aloud, “Welcome home, Karen.” 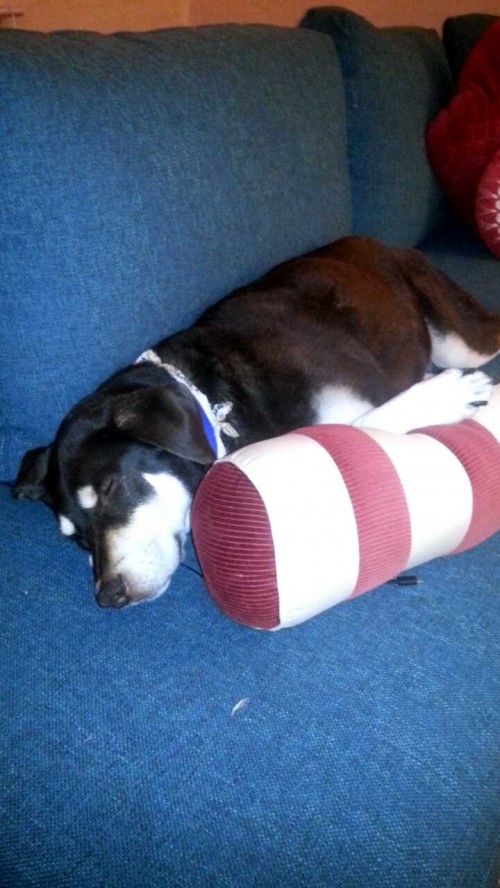 Togo has no problem making herself at home.

My dog, Togo, met me right inside the door. I welcomed her home too.

Then I gave her a good head rub and said,

“Well, it’s official, Togo. This is now our very own home!”

She was very happy; I know because of the massive tail-wagging.

I was so excited that this pretty, comfy, and perfect-for-me house was mine, that I started cleaning. I know, right? It’s weird. I have the same response to bad weather, an impending storm, or a rainy day; clean and cook. Suddenly, I wanted to finish all the projects in the house that were listed in a small notebook on my desk and I wanted to finish them that very night.

It felt urgent that I do things in the yard too; rake up the remnants of high winds and soggy rain, make a brick path from the curb to the sidewalk, and build those raised bed gardens that are on my list. I settled for re-organizing the kitchen, cleaning the toilet, scrubbing the tub, and baking a cake.

Not sure what to do next, I turned to my BFF, Google, and it’s first cousin, once removed – You Tube. And I discovered that I’m not alone.

Turns out that of singles buying houses, single women are buying at twice the rate as single men. I listened to an interesting piece on NPR’s All Things Considered; Moving Out and Buying in: Single Ladies Emerge as Homeowners.

There are lots of theories about just why single women are buying more houses than single men.

My theory is this; I think that when a woman buys a house, she’s buying freedom – she’s buying a place to make her home. When a single man buys, it’s a status symbol – but a rented condo can be a status symbol too, as long as it’s furnished impressively, so why bother buying?

Now that the cushion of cash in my bank account has been used as a down payment on the house, I need to watch how I spend my money. Ever since I moved in, I’ve had two rather major issues. Ironically, they both cost about the same amount of money to fix.

First is the refrigerator issue; it’s an older fridge and it has a split personality. It goes between freezing certain things like cream cheese, pasta salad, and three dozen eggs – to keeping my veggies, milk, and cheese so warm that they spoil fast. And of course, I’m never quite sure which foods have gone from freezing, and thawing to freezing and thawing again. Tidbit of info for you; cream cheese does not recover from being frozen, and frozen eggs…are just weird!

But at the same time, I’ve got a second issue; trees!

I have six very large trees – three on each side of my house. Before I even considered buying the house, I had a couple of arborists come and tell me what would be involved in caring for the trees. They’re very close to the house, and close to my neighbor’s houses too, and they’re monstrous. They’re somewhere between 80 and 100 years old. Both arborists agreed that the trees really need to be cut down. They are rotted inside and could last another 10-years, or they could come down in the next windstorm.

As I settled into the house, however and thought,

“Hmmm… those trees aren’t so bad. I can just put off doing anything on them.”

But then the winds began. My area isn’t known for high winds, but we did have a few pretty good wind storms in the last few months. In fact, the sound is like a wind tunnel between the house and the trees just outside the dining room window. It’s actually kind of scary sounding. And then the limbs began to fall – sometimes during the wind storm and sometimes when it was perfectly calm out.

And the limbs weren’t the kind I could deal with myself. They were huge and heavy. The worst one is the one with ivy all over it. I would be sitting in the living room and hear a CRAAACK and then a huge THUD. I’d tiptoe outside to the porch, dreading what I’d find.

So, obviously, the tree situation, can’t be put off afterall. If I deal with one tree at a time, I can probably manage it. 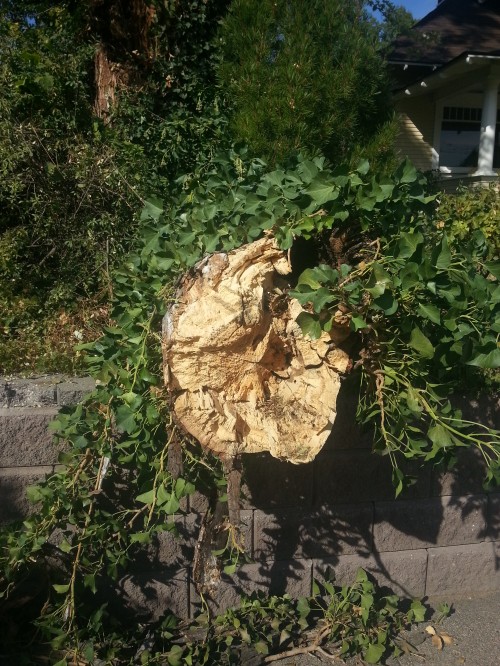 The wind wasn’t even blowing when this one fell!

1. Health and safety –
This category includes things that pose a danger in some way. Examples: trees that may fall, and window coverings for privacy (I am a single lady, afterall).

3. Projects that are big bang for the buck (and make me happy) –
This category includes things like painting a room, projects that re-purpose/recycle inexpensive items, and projects I can do without spending a lot.

Taking the time to sit back and really assess what needs to be done is so helpful. Putting each home improvement into one of the categories helped me step back and really decide what needed to be done and when.  As I made my list, I was surprised to find that certain things really were not as high a priority as I’d first thought. Having a notebook to keep track of these things as they come to mind/arise, also gives peace of mind. I can simply jot it down instead of feeling like I have to keep it all in my head.

Well, as I write this, the wind is howling. Looks like it’s time to find a tree guy.

Do you have a system to help you prioritize what needs to be done? Any women starting over out there with ideas to share? I’d love to hear them!