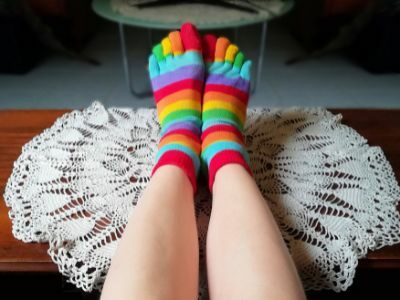 As I work on my dream to be financially successful, I discover truths about my relationship with consumerism, spending, saving, and the community at large.

This week, I was thinking about how, in the modern world, the lower the product price, the greater the real cost. Only we don’t really look at the actual cost, because we don’t have a convenient way to measure it in everyday life. We’re used to looking at price, and so we equate price with cost.

But the cost is much bigger than the price.

For example, go to Target and buy some socks. You can get them at 3 pairs for $7 or something. As a knitter, I can tell you that no way could I knit you even one pair of socks for that price–not even close. Materials alone would probably cost at least $12 per pair, and I might like to charge a bit for my ten hours of knitting time.

We all know how Target does it. Industrial production methods allow socks to be made in vast quantities, out of synthetic fibers, affecting huge economies of scale, and allowing the price of socks to stay low. Furthermore, Target offers a broad range of products. The lawnmowers and the patio furniture subsidize the socks even more.

It’s a good thing, right? More people can afford socks because of industrialization.

But industrialization is not free, far from it. It’s just that the costs of industrialization aren’t generally uppermost in people’s minds when they’re buying socks (or whatever). The price tag is the thing. Think about it, though. Here are just a few industrial costs that get run up as the price goes down.

Industrial production of socks (or whatever) means people are not knitting socks (or whatever) for a living, which means fewer jobs and the loss of useful, practical skills. The ever-downward pressure on prices means the few people who still are directly involved in the making of socks are probably in China, causing money to leave our domestic economy.

To keep prices down, production is centralized and socks are shipped, which has an environmental impact.

And then you have the psychological implications, only one of which is the culture of disposability. Cheap Target socks made from synthetic materials litter the landfill because we don’t value them as much as we would a more expensive pair of hand-knitted socks. The only people I know who still possess the ability to darn socks are the people who knit them because they’re not about to throw away something they made just on account of a little ol’ hole in the toe.

Someone is going to pay these costs.

Lots of people already are, hence the persistently sluggish economy in which we find ourselves. And the costs are going to go up and up and up until we do something to rein them in. Thus, when we are buying our 3-for-$7 socks, the price may be right, but the cost is all wrong.

I’m not sure when this started to happen, but here’s a mental image that keeps coming back to me when I think about price vs. cost. Years ago, the six members of my family sat at a campground picnic table. It was one of those tables that has wooden supports underneath it connecting the benches to the table. All one piece, in other words.

My father and two younger brothers sat on one side of the table, and my mother, sister, and I sat on the other. At some point, my 100-pound mother got up from the table. A few minutes later, my 30-pound toddler sister got up. And then (you’re seeing the punchline already, aren’t you?) I decided to get up.

Whereupon the entire table tipped over backward, sending my father and brothers sprawling on the ground and dumping potato salad, baked beans, and fried chicken all over them. Weighing in at what couldn’t have been more than about 60 pounds, I was anchoring the 300 some odd pounds on the other side of the table.

Price and cost look like that to me right now: currency on one side, and jobs, community, and the environment on the other. As prices drop, there’s less and less currency anchoring the table.

One of these days, another dollar will get up and walk away, and the whole thing will collapse.

Then what will we do?

I wish we had some kind of currency that would help us focus on costs in addition to the price. You could still pay dollars for socks, but below a certain price point, you’d also have to pay this other currency to cover the cost to the community and the environment.

But I think it would be good if we thought about the whole gamut of costs, not just the dollar part.

My friend Mike, who is a trained economist, applauded my idea for a second currency but said that it would earn me an F in Econ 101. But I still think there’s a secret language of price: the less we pay, the higher the cost.

« Positive Thursday: Bestselling Author Writes Her Own Happy Ending With a Cure for Her Son
Saint Patrick’s Day Giving is a Delicious Part of Living an American Dream »