You Are Here Home » STARTING OVER MIDLIFE » Bartering As A Way of Life? 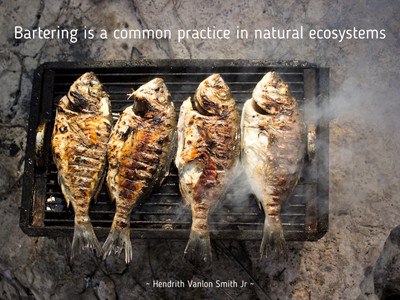 Recently I told my Virgo Man (my partner) that one of my financial success goals is to catch enough salmon this salmon season that we would have to buy another freezer just to hold it all. Well, guess what?

We figure we have caught something like 20 salmon in the last five weeks, quite the departure from recent years. I think last year we had a grand total of 3 salmon all season; this year, we are eating salmon three times a week, and still, the freezer is straining at the seams.

We are now scrambling madly to find another freezer, with four whole salmon triple-wrapped and packed on ice in a cooler. It’s almost 100 degrees in these parts, so the cooler solution is short-term at best.

Bartering as a way of life?

We would love to trade salmon for some other good, like wine or honey or olive oil or oysters. But, as Virgo Man points out, that’s probably not legal, because we would be engaging in commerce and we don’t have the licenses and credentials for that.

Plus, we might be trading with people we don’t know, and how could we be sure they’re not using risky food handling methods? Or that they don’t get their jollies from poisoning people? We might trade our salmon for bad oysters that could kill us, or at least make us so sick we’d wish we were dead.

It makes you think, doesn’t it?

Back in the day, people traded food all the time. They had to, in order to get variety in their diets. The family with the cows traded milk and butter with the family who grew corn and squash and tomatoes. The family with the eggs and chickens traded them for beef from the cow family. The government didn’t regulate it, even though people had far fewer tools and far less scientific knowledge to ensure the safety of their food processing methods.

Somehow, the human race survived and even thrived on the barter system.

Trust flourished because you knew the people you traded with, and you knew they were eating the same food they traded with you. If their kids were walking around rosy-cheeked and hearty, then you could trust that the food you were getting from them was safe for your kids, too.

And that fostered a sense of community, an appreciation of the importance of knowing one’s neighbors, and a confidence that most people would give as good as they got, except when a crop failed or the chickens quit laying, at which point your neighbors would know you were good for it and pitch in to keep you alive.

Nowadays, we are in the habit of mostly trading money for goods instead of goods for goods.

We trust money, so we don’t feel so much of a need to trust the people we’re paying. Also, we trade with people who are completely unknown to us, through companies that are divisions of other companies, which are themselves wholly owned subsidiaries of still other companies. We’ve learned to mistrust individuals and instead to trust faceless corporations and The Government with our food safety.

Think about that for five minutes, and it doesn’t make a whole lot of sense. Safety is easier nowadays, but we don’t trust individuals to be safe. We only trust big businesses and big government to be safe.

There’s no longer any guesswork involved in cooking things to the right temperature–pretty much anyone with a pulse can use a gadget to measure how hot something is, and can go on the internet to find out what the safe processing temperature is. The “old-fashioned” practice of home canning is way more predictable and far simpler than it was before there were sterilizing dishwashers and temperature-controlled stoves.

We have reliable refrigeration and can ensure that our kitchens are pest-free. We all know to be careful with raw chicken and pork. In fact, most of us are downright paranoid about it.

But somehow, it’s still scarier to think about trading food with regular folks than it is to trade money for industrial food, like in the grocery store.

Personally, I’d rather trust my neighbor and keep my eyes on his kids’ well-being. At least I know he’s got the same skin in the game that I do. So that’s a new dream goal I have: to supply more than half of my family’s dietary needs without trading money for it. I have no idea if that would be legal, or even possible.

But it sure would be interesting to give bartering a try.