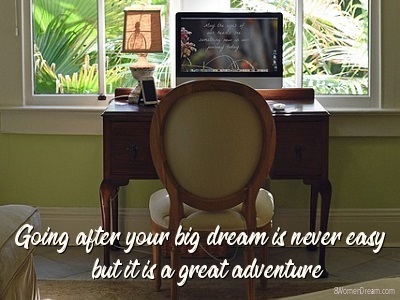 What is it like to go after your big dream?

Crazy things happen. Difficulties multiply. Life has a way of pouring everything on at once.

When I imagined my dream life as a writer, I pictured a pretty little antique desk in front of a window that overlooked the lovely change of seasons. I saw a cup of tea on the desk, stacks of beloved books, and my fingers flying across the keyboard with inspired words.

That’s not exactly what reality looks like for me. No, reality looks more like a sitcom, a drama, and a crazy reality show all rolled up into one.

Last week, I told you about my unfortunate adventures with a mouse or two (more!) in my 100-year old home. As if finding a mouse floating in your toilet wasn’t enough, there’s more.

The Pest Control guy (aka My Hero!)  left bait traps with the instructions to check them once a week or so. If a lot of bait was gone, it was a good sign. Soon this would be over. But I was getting ready to go out of town, so I checked them early–two days after he left.

The ones outside and in the basement were still full – and hadn’t attracted any mice at all. The one under the kitchen sink was empty. Empty! I refilled it and went back to writing. I was preparing to take my mom to Seattle for an appointment. Since I’m on a deadline with my current WIP (Work-in-Progress), I would also be working with the subject of my book, who lives in the Seattle area. That meant I needed to get a lot of writing/editing done before the trip!

My daughter and granddaughter would be staying at my house, taking care of my dog while I was gone. To say that my daughter is freaked out by critters would be an understatement. So, the day before leaving, I checked the bait stations and again they were all still full, except for the one under the sink. But this time, there were only a few nibbles out of the bait. Since we hadn’t found evidence (aka poo) of a large infestation, I was happy that the numbers were dwindling. Finally, I could rest at ease knowing that my daughter and granddaughter wouldn’t have to deal with mice while I was gone.

The afternoon before leaving for the trip, I was working hard on the chapter-by-chapter synopsis for my current WIP, a narrative nonfiction book tentatively entitled, Drawing Them Home. I’d added an extra day to the Seattle trip to work on the book. Though I’d interviewed Michael Reagan over the phone, by email, and in person, this was the first time he’d read what I’d written. Instead of starting with the book itself, I decided to have him read the chapter-by-chapter synopsis, so he could see the direction the book was going.

I finished the chapter synopsis’ a few months ago and sent it to my agent. She was pleased with it. Then I went back to editing the book. But having Michael Reagan, the person whose life story I was telling, read it–was a whole other thing. I went over it slowly, trying to imagine his questions, his emotions and reactions and then editing accordingly.

Editing with an Unwelcome Audience

I sat at my messy desk, a cup of tea too cooled to enjoy staring out at a rainy day. My living room and dining room are one long room. My desk is in the dining room. As I worked, I was vaguely aware that the wind had picked up, not by looking out the window, but by the sound I heard from the air swirling above the pipe of the woodstove. An hour or so passed and for some reason, it occurred to me to look out the window. No wind. No wind at all. Everything outside was still except for the rain falling. I stood up and went to the woodstove and listened. Yep, there it was – that sound I’d been hearing. I listened and listened. It was sporadic but in a constant way.

My old dog, Togo jumped off the bed and came running. She knew that was the tone I used when I’d found a bug, her favorite play toy!

She looked at me, excited.

This was the phrase I’d used a hundred times to make her find, play with, and eventually kill a spider or bug I’d discovered.  She held very still and then started sniffing the floor.

I tapped the woodstove. When I did, the skittering stopped. Well, that was a relief. The stupid little mouse must have skittered his way back up the pipe.

Eventually, it will get to the bait and it will be gone too. Or it will go somewhere else – to someone else’s house. Either way…good riddance!

I sat back down and emersed myself in the story before me. I was more than halfway through the final edit with still a lot of reading and editing to do.

Then I heard it again.

Togo came running again. She looked at me for guidance.

“It’s inside the woodstove!” I said, completely annoyed. “How in the world am I going to get it out? How can I make it go away?”

Then I had a brilliant thought. I went to the kitchen and got my broom. I banged on the woodstove and the black pipe leading to it. The sound stopped. But I wasn’t falling for it this time. I banged away, making a huge racket, as Togo watched not the woodstove, but for me. I stopped and listened. Nothing. I stood and listened some more. Time passed.

Yes, I was brilliant. This single-woman-living-alone thing wasn’t so bad. I could handle anything a man could. I took the broom back to the kitchen and washed my hands good.

Michael Reagan had lived such a varied life. I finished the portion that was personal – his traumatic childhood, his teen years, and volunteering to go to Vietnam. The chapters about Vietnam would be difficult for him to read and relive. But they were also the foundation for what was to come. I was careful to edit out any redundancies. This was a synopsis; there was no need to repeat myself. Finally, I delved into the portion of the book dedicated to the Fallen Heroes Project he founded in 2004.Since that time, Mike has drawn more than 4,000 portraits of fallen heroes, which are then given free to families. I’d chosen ten stories to highlight – stories of the amazing things families of the fallen had experienced upon receiving the portrait of their loved one. Michael too was changed by the portraits, so his own story was woven throughout. I was nearly three-quarters of the way done when I heard it again.

That damn mouse! It was back!

Clearly, I wasn’t as brilliant as I’d first thought. Though banging on the stove stopped him momentarily, it didn’t send him running for his life. Instead, it seemed he just hid out until he thought the coast was clear. Oh my! My daughter would be arriving the next day to house/dog sit for me. I could not take a chance that she’d have to deal with the mouse in the stove, instead of me. After all, she’d have her hands full with the house, my dog, and her toddler.

I considered my options and came up with another plan. If I lit papers on fire, the mouse’s instinct would be to run back up the pipe and onto the roof where he’d apparently come from. I hadn’t had a fire yet this season, so I had to hunt down a lighter, a few pieces of kindling, and some newspaper. Then I remembered the fire-starters my dad gave me last year. They’re sticks of highly flammable compressed wood or something and soaked in some sort of chemical. I remembered the directions from last year – the warning to only burn them with the stove door closed. And I remembered the smelly fumes too. Perfect! That smell, combined with the smoke would get rid of that mouse for sure! Opening a newspaper, I stuffed it with little slivers of wood, more paper, and the fire-starter. I crumpled the whole thing up into a wad of paper.

I decided to leave the free-standing, decorative fireplace screen in place. I opened the doors and quickly placed the wad of paper into the stove. I clicked the lighter and lit the paper in three places. But there was a flaw in my plan!

I couldn’t remember whether the flue was open or closed. And I didn’t know which way to pull/push the lever to open it. If it was closed, the house would fill with smoke (and one very angry mouse). If it was open, the mouse would be running up to the chimney. Putting my hand on the lever outside the woodstove, I contemplated for just a second. I looked to see if smoke seemed to be coming out or staying in. When I didn’t see smoke coming out, I moved to close the fireplace door. Just then, there was a huge pop and a large amber hit the screen. In an instant, I looked down and saw the ball of flame. How could it get that hot that fast?

But then it moved!

A ball of flaming mouse ran to the edge of the screen – TOWARD ME!

I screamed aloud, long scream that was worthy of a psycho-thriller–you know, the one where the girl stays home alone even though she knows there’s an ax-murderer on the loose. The one where she runs down the street in a straight line and breaks the heel off of one shoe. I’ve never screamed like that in my life. And I was running. I was running and screaming. It wasn’t a bunch of short screams – which somehow seems it would have been more “normal.” No, this was one long, continuous scream. I ran as fast as my feet would take me – to the kitchen.

Yes, the kitchen. Why? I don’t know. But I wasn’t alone. My dog, Togo, followed me – although I’m still not certain if she was more scared of the flaming mouse, or the screaming banshee next to her. Then I realized – there was nowhere to run. I was single. I lived alone. Nobody was coming to save me. I stood there for a few seconds. Then I picked up my broom-weapon again and slowly made my way back to the living room. The last time I’d seen him, he was first aflame and then a blob of a smoldering mouse, running with smoke trailing behind him. I edged forward – babbling to myself incoherently. Then I started making promises to the mouse.

Then I stopped talking. I realized this flaming or at the very least, smoldering…mouse, was now in my house somewhere. Somewhere. He could be starting a fire somewhere. Oh great. How does one explain something like this to an insurance company?

“Hello, Mr. Fire Examiner? Uh, my house burned down because of a mouse. No, seriously. It’s a funny story really, and not my fault at all…”

The night passed without incident – though I was jumpy and seeing things all night. The mouse was gone, I went back to my writing.

A few days later, I was meeting with Michael Reagan. Maybe, like me, he pictured the perfect life of a writer. If he only knew how UN-true it is!

Going after your big dream is never easy but it is a great adventure.

« Does your audience care about your message?
Finding Happiness in Spreading Holiday Cheer »