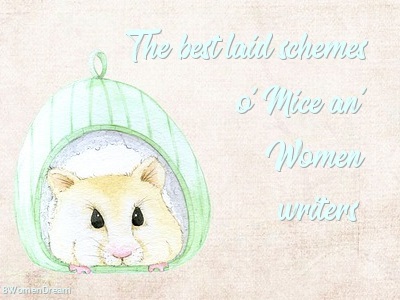 Going after my writing a book dream is great but I miss my ex-husband.

I’m sure that expressing that breaks every Independent-Woman-After-Divorce-Law there is. But before you send me hate-mail or advise me to get back together with him, let me explain.

The division of labor during our 31-year marriage was fairly typical. He mowed the lawn once a week during the summer and I did everything else. My opinion, of course. I’m entitled to my own truth. Last week though – my truth was challenged. It was this; perhaps, maybe, there’s a teeny-tiny possibility that he did more than that. Let me share a story with you to illustrate this.

Last week, I was standing in the kitchen, when my dog, Togo ran across the room, swooped down and came back up with something in her mouth.

After freaking out, and opening the back door for her, I commanded her to “drop it!” outside. She did. Lying there was a small mouse that most certainly died of a heart attack since there were no wounds on him. Surely, I thought, this was just an isolated incident–a mouse on his way to someone else’s house.

I went to bed that night and slept just fine. In the morning, I got up and in the dim light noticed a leaf had fallen into Togo’s water bowl. Instead of fishing it out, like I’d done half a dozen times in the last few weeks (her bowl is by the back door), I turned the light on. There, apparently, after a fatal belly flop, was a mouse.

Thank God I’d turned the light on. If I’d touched that mouse, you would have heard me scream from my home in the pacific northwest all the way to the tip of Florida!

That’s where my ex-husband comes in–well, not literally.

When we were married, we noticed what we soon learned were mouse droppings in our kitchen. There must have been a conversation about what to do, but I don’t remember it. That night, while we were watching T.V., my husband kept getting up and going to the kitchen. I barely noticed. Finally, after several times, it dawned on me. He’d bought those old fashioned mouse traps and set them behind the fridge, under the sink, and a few other places. As we watched TV in the living room, we’d hear the snap-snap-snap of the traps being triggered and he’d go in and do whatever he did and then reset the traps. To be honest, I didn’t even think about it. And within a week or so, the mice were gone.

Now, standing in my kitchen, I contemplated what to do.

I tried to imagine myself using those same wooden traps, setting them, getting rid of the bodies and resetting them. Nope. Not something I could fathom doing. I didn’t even bother with Google. People do all kinds of crazy things to get rid of mice, but to be honest, I wanted it done now – not after I experimented with all sorts of craziness. So, I called an Exterminator aka Pest Control. He could come the following day.

In the meantime, I set out on a hunt for mouse droppings. I cleaned out every drawer, every cupboard. I threw out any food in the cupboards that had been opened, even if it had a clip on it. Though I hadn’t found any droppings, I wasn’t taking any chances. I turned on all the lights in my root cellar and looked there too. Nothing. Where in the world were these mice coming from? Back upstairs, I took everything out from under the sink. The garbage can, the household cleaners – and then I saw it. Aha! An empty packet of powdered gravy was in shreds, having fallen from the garbage can. Tiny flakes of foil were spread around, but most telling of all were the mouse droppings! I got out my bleach cleaner and scrubbed.

That night, before going to bed, I dumped out the water in Togo’s bowl and turned it upside down in the sink. I was not going to tempt fate! The next morning, in the dim light, I went to the bathroom. For some reason, I flipped on the light first. There, floating in the toilet was another dead mouse! In my toilet!

She looked at the floating mouse and then looked at me as if to say, “So? What do you want me to do about it?” And then she walked away. Now I had two choices; one involved having to handle the mouse and the other involved the mouse corpse possibly plugging up my toilet, in which case, I’d still have to handle the body. I made my best “cringe-face” and flushed. Thank God it went down!

The next day, Pest Control came. Turns out they no longer trap mice at all. Instead, they set bait stations. The mice are attracted to them, eat the bait, go back and feed it to their nest and the whole bunch of ’em are gone…just like that. Though he couldn’t find any droppings either, we put two bait stations outside and two inside. Every few days, I checked the bait stations to see if it was going down or not. At first, it went down quickly. Then the activity dwindled. And within about a week, there were no more signs of mice.

I had to admit that my ex may have been good at more than just mowing the lawn. But more importantly, I managed to get through yet another “first.” Dealing with critters, whether they’re four-legged or eight, is not fun. But when you only have yourself to rely on, you figure it out. Though calling Pest Control might not be as heroic as somehow going homicidal on all of them myself, I am none-the-less, proud of myself for facing the problem and dealing with it swiftly.

The mice finally were gone, I had one day until I would be leaving on a trip. As I sat on the sofa, I heard something. At first, I thought it was the wind. But a glance out the window told me otherwise.

To be continued next week.