I intended for 2013 to be an “epic” year for me, and so far it has been. I didn’t expect however to have to get rescued, Baywatch-style, from getting my face smashed against the coral reefs of Key West, while swimming in waters teeming with barracuda, Tiger and Hammerhead sharks.

And yet that is exactly what happened to me last Saturday… 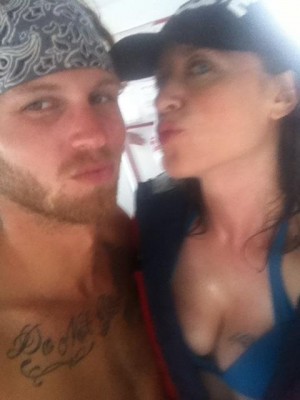 I have been spending the Christmas and New Year’s holiday with my parents and siblings in Florida, on the Southern Gulf Coast. My parents own a condo in Fort Myers, and we’ve been making a number of side trips to other cities and destinations in Florida.

Last weekend, we headed to Key West, which is the Southernmost point in the United States. It was a balmy, fun and wacky weekend, full of unexpected adventures, including having my life rescued by some handsome snorkel instructors after I accidentally swam into the breakwater.

On The Snorkel Boat

My brother Shanti had arranged a trip on a snorkeling boat for Saturday morning. I love snorkeling, and was excited to see live coral reefs, full of colorful exotic fish and sea turtles.

It was going to be a three-hour tour, and we were led by handsome young snorkel instructors: Tomas and Marcus. They instructed us on how to put our gear on, what to do, what not to do.

I was mostly paying attention and also apparently somehow missed or did not fully digest the part about not swimming into the breakers. There was going to be a section of the water where there are shallows above the coral, and waves break on the reef.

Fearless as I am, after zipping up my wet suit, slipping on my flippers and jumping off the edge of the boat, mask and snorkel in hand, I swam out by myself into the blue distance.

I was enjoying the bright live coral reefs, the colorful exotic fish, and didn’t realize I was getting into danger when there started to be a bit of a wave in the water. The instructors had told us over and over, just relax, relax, relax.

The instructors had told us that if we were in trouble to employ the universal signal for “I need help” – which is freaking out. I freaked out and waved my arms in the air wildly… and was bobbed about on the waves, some crashing over my head, spitting out sea water and definitely panicking a bit.

One of the snorkel instructors luckily had spotted me struggling and was already on his way out to me. Soon enough, although it felt like a long time, he was there with his Baywatch style red rescue floaters, and he had me grab onto it and then pulled me into safety.

I decided I had had enough of the snorkeling for one day, and ended up spending the remaining two hours of the boat trip drinking champagne in the boat cabin some of the crew. Not such a bad way to spend the rest of the morning at all, really.

The Power of Fearlessness

I am a pretty fearless person, apparently to a fault sometimes. In this case, me not heeding warnings to avoid the breakers, and not trying to get out of the small waves when I was bobbing lightly in them, resulted in the situation getting out of control.

Luckily I was rescued right away. Luckily all was well. As my father so helpfully pointed out later, “It’s a good thing you didn’t get smashed against the coral because the blood probably would have attracted barracuda and sharks, and then the trip would have been over for everyone.”

In general however I see how fearlessness has enable me to live a life of my dreams, traveling the world, constantly trying new things.

« Getting Rid of Beliefs That Stop Your Dream Progress Once and For All
Dream of Being a Published Author? Develop Your Online Presence »