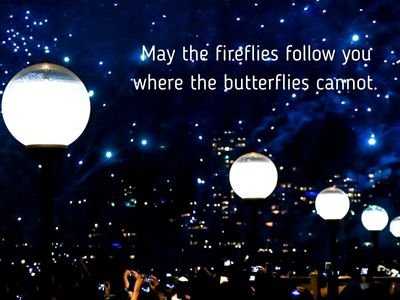 Like a symphony of twinkling stars, the fireflies flashed their bright lights, one after another, dancing in the woods behind the backyard and in the tall grasses and gardens around the back deck.

Sarah, the owner of this beautiful house in Athens, New York, had just moments ago said the fireflies would be out any minute, and there they were, as if on cue. I was gathered with ten other women who had come together to celebrate the “new moon” earlier that week.

The organizer of the gatherings, a vibrant and voluptuous woman named Margot with short fiery red hair, had us gather in a circle and read from a book about the 13 archetypes of women, according to the lunar calendar.

The archetype for the month of June was the storyteller, and the passage we read included a story about how the firefly was created. It was all about learning lessons, following our inner wisdom, and learning from our elders.

It reminded me of the power of telling stories to help heal others, and to serve as a guide for others along the path of life.

It took me almost fifteen years to have the courage to share my trauma story with the world. It was terrifying to reveal what had happened to me years ago, so I kept it all a secret for a long time.

I finally decided that if telling my story could help even one person heal, it would be worth it. Telling my story also brought me tremendous freedom, since I no longer had anything to hide. Sharing my trauma story became my big dream.

As I refocus on writing my book proposal, I wanted to share more about my upcoming memoir. May we all “become the butterfly,” giving ourselves permission to just be our beautiful selves, and finding more love, joy, and peace in our lives.

If we had not been in silence, the afternoons long and full and wordless, senses of sight and touch and smell heightened without the web of words weaving through the air to connect us, I might never have noticed the butterflies, wings fluttering ever so slightly on the surface of the water, these butterflies trapped by the weight of their own dampened wings, unable to fly.

They were so elegant, delicate, and helpless. One by one, I plucked them out of the pool, gently holding each one on my fingertips, up to the sun so the wings could dry. One by one, I sat with them for minutes that stretched on like quiet hours, the second hand on the clock above the pool slowly circling around, seconds ticking away while their delicate orange and black wings dried.

I watched them gently moving in my hand, the hind and fore wings stirring, the thorax and proboscis used to sip flower nectar bending with the wind of my hot breath. These creatures were small, complex, and miraculous.

After about 10 minutes when the wings were dry and flapping open, I would shake each butterfly off my hand and scoop another one out of the pool.

They were my personal symbol, a metaphor for my own transformation.

Which angels were these sprouting wings out of my back, I wondered? Surely my best friend and guardian angel, the man I loved who died when I was 22. Surely my grandfather, my mother’s father whose sky blue eyes and thousand-watt smile I had inherited. I didn’t know who was responsible for these other sets of wings.

Maybe I was turning into an angel myself over time, after all I had suffered and learned.

Going on a silent retreat was new to me. Here I was, camped out on the cliffs above Santa Barbara, on a ranch once owned by Jane Fonda and where Michael Jackson had donated the money to build a theater. I was there with 25 other students, devotees of my yoga and meditation instructor Dina, who was teaching me how to love myself again, how to open my heart and soften so that I wouldn’t talk to myself in such mean ways.

For such a kind woman, I could be ruthless with myself.

I couldn’t remember ever not being that way, ever since I was a child prodigy, and adults fussed over me and told me I would be great at everything. I appreciated the attention and was terrified by the pressure.

How would I save this planet of ours, and keep it spinning on its axis when wars and poverty threatened to make it implode, our beautiful blue and green sphere crushed by the weight of all the hate in the world?

Fixing the world felt like my job. Well into my 30s, I had never gotten over that, even after earning degrees from Princeton and Harvard, organizing events for Hillary Clinton, working for San Francisco Mayor Gavin Newsom, and being asked to run for mayor of the small city where I’d lived before moving to SF – Troy, New York.

That is why being on retreat for a week in total silence, rising each day at 7 a.m. to meditate, doing yoga for four hours a day, phone turned off, a computer at home, nobody calling me or emailing me or counting on me for anything, felt like such a relief.

Here I could just be, simply enjoy the luscious sweetness of every bite of ripe papaya, raspberries, peaches, pineapple, and apple, drizzled with yogurt and sweet coconut and raisins, as I spooned it into my mouth in the morning.

Here I could just lie in the grass for hours, lazing in the sun like a cat, stretching out to catch the rays, sliding across the grass to a new golden patch of light when I fell into shadow as the sun dipped west. Sunsets over the cliffs were dazzling, skies striped in pink and purple, the sky dropping away, earth falling straight down in a sheer wall that bottomed out at houses, one mile down, with the city of Santa Barbara in a lit-up grid beneath us, and the ocean beyond that.

The next year when I returned for the same retreat, the scene would be different, the skies filling with smoke and the trees in the distance leaping with orange flames. The wildfires were creeping closer and closer, and we eventually had to be evacuated.  The helicopters swooped in overhead, diving down to scoop up baskets full of water and rushing back to pour it over the flames, creating a hissing cloud of steam over the forest, again and again.

I felt like I was in an action-adventure movie. And my life certainly didn’t need any more drama. Nor did I want any more fires.

Before I chose the butterfly as my metaphor, I thought of myself as the phoenix rising from Greek mythology. These birds were identified with the sun and said to have a life span of 500 to 1,000 years. As the end of its life approached, the phoenix would build a nest of myrrh, set it aflame, burn down, and in three days rise again.

That had been me.