You Are Here Home » HAPPINESS THROUGH ACTIVISM » A Tribute to My Heroes For Father’s Day, Part II

It started as a simple walk in the woods known as “The Dingle,” just down the street from my childhood home, my brother Joey, my father and I holding hands and walking down the hillside into the thick of it, leaves and twigs crunching underfoot.

I still remember that my dad was wearing a red bandana tied around his head, a navy sweatshirt and jeans. It was supposed to be just a little stroll before dinner, another chance to explore this forest world that was so close to home, and yet still a new experience for a kids of four and seven.

Surrounded by the towering maples and oaks, downhill we went, heading towards the stream at the bottom. The Dingle connected further back to Forest Park, an 800-acres park in Springfield, Massachusetts, the city where I grew up.

Drama in the Forest!

All was well, until I managed to step on a hornet’s nest. It was cleverly disguised in a fallen long, and or I never saw it coming ~ I only know that suddenly hornets were swarming around our heads, buzzing under my sweatshirt.

And just as suddenly, I was whisked up and away into the air, and my brother was lifted up too, and my father ran at full speed, raced up that hill, scooping us up along with him. Hornets flew into my brother’s mouth. They swarmed in my hair.

But as he ran, holding us tightly, the swarms flew away. My brother got stung. Miraculously, I didn’t. Not a single sting, with the hundreds of hornets swarming all around us.

Soon enough, we were home safe. My father, who had lifted weights steadily since age 14 and could do push-ups on his knuckles or clapping in-between, sometimes with one of us munchkins sitting on his back, had rallied all his strength and speed. 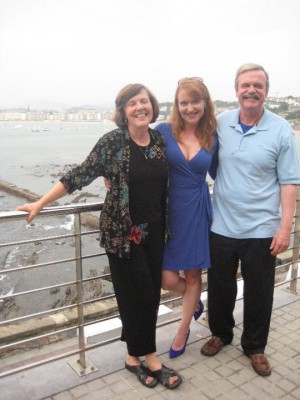 It wasn’t the first time and it wouldn’t be the last time. Just last October, I got caught in the improbable Halloween weekend blizzard that raged across the East Coast. It took me six hours, slipping and sliding all over the road, white-knuckling the steering wheel, to reach a rest-stop that I normally reach in 45 minutes.

I was going to sleep overnight in one of the booths at the 24-hour McDonald’s, but my dad, my hero, insisted on driving in the blinding snow, over black ice, to come get me at 9 at night. You can read more about that ordeal and rescue here on 8womendream.

As a grown woman, I still found him coming to my rescue.

Supporting Me, No Matter What

My dad has always wanted me to live my dreams. When I thought about running for political office, he pledged to support me both financially and with resources from his office, which he told me I could use as “headquarters” when needed.

He is a veteran himself of having run several successful political campaigns over the years, including his own as Democratic State Committeeman and my uncle’s campaign for State Representative back in the ’80s.

When I decided I really wanted to write books, he pitched ideas for “sure-fire” best-sellers, suggesting that I write spy novel thrillers based in Russia, where I had spent a summer after college, and featuring swing dancing, which was my passion.

I didn’t opt for the thriller route, wanting to share my own stories instead of world travels, spiritual healing, and “the path to peace” after my recovery from the trauma I experienced in my early 20s…

But I have always loved it that he was, and is, watching out for me.

I don’t know how. I know words aren’t enough. I know that I have always wanted to make my father proud, and I know there have been times I’ve let him down, and I’m sure I will again, without meaning to, on this human journey… I can only hope that who I am in this world and my legacy overall will turn out to be one that will make him proud.

He deserves the best from his children, and deserves to know how deeply he is loved. Thanks, Dad, for always and still teaching me, guiding me and when necessary saving me from the dragons of this world.

« A Tribute to My Heroes For Father’s Day, Part I
How Ansel Adams Quotes Inspire Us to Live our Top Photographer Dreams »