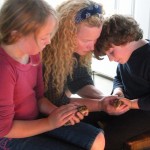 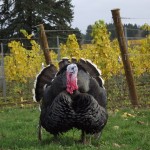 Taking Tom out for evening walkies. 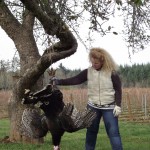 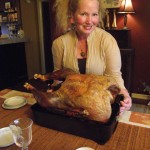 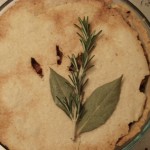 What my husband, Bryan, and I did for my favorite holiday last year and ultimately how we both were profoundly affected on Thursday the 25th of November, 2010, is an event we are just now fully coming to terms with.

Bryan never wanted this, but, with marrying me comes a whole heck of a lot of things he never thought about wanting.

Bringing the little turkey babies home from the feed store back in May, he said, “There is NO way you’re going to want to eat these.”

Yes, they were super cute, and I loved them both immediately, but I also knew that he was right, I wasn’t going to eat these adorable little peeping poults, I was going to eat a FULLY GROWN, delicious, healthful turkey for Thanksgiving dinner.

After recovering from the deeply emotional loss of one of the baby turkeys to a huge skunk, then trapping and disposing of this skunk, through the feeding, watering, walking and training the turkey how to perch up high on the piece of lumber Bryan installed in the pen, all was moving along with a daily pace that our whole family really seemed to enjoy.

The big day was growing closer and I was consumed by thoughts of every step of the process that we were about to embark upon. You see, I decided after doing tons of research, that farm animals raised for meat on a small scale are most traumatized by being transported to a processing plant, thus causing the animal extreme undue stress and possibly even tough meat.

I wasn’t interested in loading up a freaked out turkey, driving several miles to where we could have strangers dispatch of the bird, and hope that what comes out on the other side was . . .

We must do this ourselves, I informed Bryan.

“YouTube”, I have found, is an excellent resource for researching this kind of thing, as are my Mother Earth and Grit magazines and “The Fabulous Beekman Boys“ on the Planet Green network. Still, nothing short of having actually performed this exact kind of thing in some past life could have prepared either of us for what we endeavored to do at 10:00 a.m. Thanksgiving Day.

For me, there was absolutely no turning back once I opened the door for the turkey to leave his pen.

I escorted our large Tom over to the apple tree with the sturdy branch we had determined would be the one to hang him by the bird ankles from.

Bryan laid out a lasso that I then tried several times to coax Tom into. We were becoming frustrated by our failures to snag both enormous feet and as these things always go, as soon as we stepped back, Tom walked with both feet and stood in the middle of the lasso!

Bryan gave it one quick, cattle wrangler type tug, and we both picked him up by the legs. He was shockingly heavy and it required both of our backs and all of our strength to lift him.

Once up and over the branch with the rope, I had to make sure to loop around and through the feet to keep the beastly, gigantic bird from slipping out of the rope and onto the ground. This was extremely important to me because I was certain that a quick and limited pain death was the way to do this right.

This, as it turns out, was the easy part.

We had agreed before-hand that Bryan would be the one to use the very sharp knife to open the turkey’s neck, as he has much stronger hands and I was to go make sure the children were away from the window for this part.

The very long neck of this bird, though, was tucked up into his chest feathers and with the wings now splayed open, nearly impossible to find. I came back outside to determine that I needed to hold the turkey, while Bryan went at his neck again, then again. Then again, again, and once more, before any real amount of blood-letting began.

While tempted to do so, I refused to permit myself to look away.

These were all of my own personal choices. All of it.Â  I must take full responsibility.

I felt I would be the worst kind of hypocrite to have spent the last two years of my life living by the teachings of Food Inc., Joel Salatin of Polyface Farms, Inc., Michael Pollen, Alice Waters and Richard Preoneke and then turn away from what I had adopted as my truths.

This was tough.Â  Really, really, tough.

Hanging upside down, the turkey was trying to gobble, to make a sound.Â Â  That interesting, day enhancing sound we had heard every day, several times a day since he was mature enough to make it.Â  But he was dying. Dying a much slower death than anything I had witness on the videos or read about in books.

When we were certain he was dead, after a fitful body thrashing period with violent flapping of his mighty wings that spanned seven feet, and what seemed like an agonizing eternity, his eyes finally closed and we lowered the turkey into the cleaned wheel barrow to commence plucking.

After a first dunk in the very hot water, I started with what seemed the easiest area for feather removal, and quickly found this a daunting task.

Again, unwilling to allow myself to feel like the difficulty in all of this work was thrust upon me, I continued with a renewed sense of purpose. I was determined that this was going to be the very best meal I have ever eaten or served to my family.

Honoring our turkey’s life, gratitude for this food and for the depth of love my husband must have for me to be a part of it all, was all that I allowed to swirl in my head as I carried on with the plucking.

Bryan and I weren’t saying very much to each other for what felt to me a very long while.

I worried and wondered if this was the time I had gone too far. Was my desire to live closer to the earth, and be self-sufficient going to damage our relationship? I had never asked Bryan if this was his dream, I have just kept moving forward with mine, almost self-righteously at times.

My husband had left me and the bird outside and gone in to check on the children.Â  Or so I thought.

A moment later the window opened and he had placed speakers in the sill just above me so that I could hear (my favorite) holiday album, “A Rat Pack Christmas” music while I carried on plucking.Â  A minute or two later he held a glass of Pinot up to my lips for me to sip, as my gloved hands were covered in the “dirty” work I was doing and all that it implied.

After three or four more dunks in hot water, using pliers for the tail, pin and wing feathers about every ten minutes or so Bryan and I had to spell one another because this was becoming literal back breaking work.

When we agreed the bird was clean enough on the outside I flipped it over and using a super sharp knife, swiftly and while holding my breath (thank you again YouTube video) made my first cut at the bird’s bum hole and straight up. With double gloved hands I pulled back the skin, reached inside and disconnected organs in much the same way my father had taught me to clean a fish when I was a small child.

Only this was no trout.

I held a heart in my left hand. It was warm and in a word, perfect. I did my own mental inventory of the other organs as I removed them, flipped the turkey by the still attached feet (‘cause that’s how it’s done) and began work on the neck. I now needed to do some breathing, and am sorry to this very moment for the new smell memory forever cemented in my olfactory system.

Bryan knew I had hit the wall, and he took care of all of the clean up, dismembering and removal of the inedible (to us) parts of legs and introducing the turkey to its brine bath where it would soak for the next 18 hours.

Our original intention was a short brine and get him in the oven for the feast on Thanksgiving Day. We decided this Thanksgiving had become far too awesome an endeavor for one day and after a long hot shower we had our “Charlie Brown Thanksgiving” dinner number one of: Popcorn, jelly beans, pretzels and toast.

That night, after clearing the dishes away, I broke down.

I apologized, tearfully to my little daughter and my husband for killing what had become our family pet. I realized my mistakes, and vowed not to repeat them. I thanked Bryan for going along with me and being strong enough to be my man.

Sleep for me that night was the movie in my brain of the entire experience from beginning to end over and over, until it was light outside.

In addition to my family and of course the turkey, this Thanksgiving,Â  I am thankful for the experience that brought out the very best of what an incredible relationship I have with my husband, the spirit with which my children ultimately accepted the meals this turkey continued to provide for months afterward, and the new and wonder-filled, “Grape Life” that it has all pumped into my dream of being a farm girl filled with a lifetime of adventure!

« The Genius Diet Conclusion: The Travel Trip Test
8 Top Ways To Motivate Yourself To Take Action On Your Dream »