You Are Here Home » WRITE WITH US » Does Your Big Dream Involve Deep Writing? 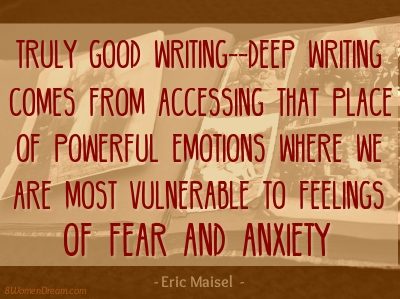 Each week as I work on my dream of finishing my memoir about toxic mothers and getting it published with some success, I take time away from writing to trek to the library and check-out an armload of books.

Besides my love of reading, I do this because the more you read as an author, the better you write.

While working on my memoir, I’ve been reading two books at the same time. Right now it’s “The Bill from My Father“ by Bernard Cooper and “Deep Writing“ by Eric Maisel.

Every now and then, I’m rewarded with a couple of books that complement each other, and thus both books are enhanced. Pairing the books allows Maisel’s book to validate the memoir by Cooper, highlighting the strength of Cooper’s storytelling.

I like Cooper even though he has won the PEN/Hemingway Award, an O. Henry Prize and the Guggenheim Fellowship that (wink) should have gone to me.

The Bill from My Father

The Bill from My Father is a book about Cooper’s strange, angry, brilliant, aloof and cranky lawyer-father had me laughing out loud while wincing with recognition at the things you really think when a toxic parent does the things they do. His father is so combative, so glib and ostensibly droll (only to strangers and waitresses) that Cooper needs merely to use direct quotes to clue his reader on what he has dealt with his entire life.

“I take it Betty sleeps with you?” (Cooper asks his dad, referring to his father’s live-in nurse)

“What do you mean, sleeps?”

“Okay. She sleeps with me.”

“As in falls asleep?”

We were like two men racing each other on stationary bicycles.

Is that the best description ever?

The father and son are so dysfunctional Cooper never does get any information about his family’s original Russian sir name (discarded at the former immigration inspection station, Ellis Island) before his father succumbs to dementia. Alternating between my two chosen library books highlighted the writing risks Cooper was taking.

While Cooper needs no guidance on writing deeply, I’m open to suggestions.

Eric Maisel is a private psychotherapist who works solely with artists; mainly writers. Within just a few pages of his book, Deep Writing, he has helped me immensely. Maisel believes in the practice of hushing negative self-talk.

I am conscious of this problem writers have, and I have my strategies to combat my negative self-talk, but I can’t seem to do it consistently. Maisel describes those loops of voices–including my mother on boxed wine, my algebra teacher who embarrassed me at the blackboard, and the boss who once told me I tend to let people hold onto the impression that I know more than I do–that can freeze you in your creative tracks.

Think of those negative voices as children in their beds in two rows in a dark orphanage attic. No one wants them. They’re too ugly, cynical, and cranky. When you intend to write, you imagine starting at one end of a hall and walking towards a door at the other end.

You can stroll (to better absorb every demeaning syllable) or run (which can put you in a fearful frame of mind)–it’s your choice. But to write authentically, you have to get to your safe place just on the other side of that door.

You can look or not look.

Listen or not listen.

But remember, you keep these nagging negative voices in your head.

These voices are you trying to sabotage yourself.

Wouldn’t it be easier to follow Maisel’s suggestion to say “Hush!” to your self-critical inner voice? Say “Hush, hush.” to your brain speaking in tongues to trip you out. Say “Hush now!” to the voices of people dead, so long you can’t bring their faces to mind. This exercise is so easy that I’m finding it works like soft butter on warm toast. I focus sooner, and I write more authentically with less fear and second-guessing.

Maisel defines deep writing as “writing passionately and well about those things that really matter to you.”

His slim book covers seven principles; each shared in its own chapter. To help writers grasp his concepts, Maisel examines five fictional writers through his seven principles while sharing specific exercises, which include such activities as writing a vision statement (to hold the intention) and finding a totem object to squeeze, thus giving your unfinished novel a loving hug (to befriend the work).

“This approach may sound loony to you,” he says, but writers who take his workshops “come around.” This psychological approach sets Maisel’s work apart from the many inspirational how-to-write books: Hushing the Mind, Holding the Intention, Making Choices, Honoring the Process, Befriending the Work (there’s a concept), Evaluating the Work and Doing What’s Required. (Partial source: Amazon)

When Maisel gets a buying spike in his book orders on Amazon.com, he won’t know he should thank me.

But we’ll know it’s the least I can do considering how much he’s already helped me, my negative self-talk, and my deep writing process.

Rayne Wolfe, a retired NYTimes newspaper reporter who serves as a volunteer police chaplain, making death notifications and supporting families suffering loss. Her first book, Toxic Mom Toolkit, was published in 2013. She is currently working on her first novel, The Strong Man.