You Are Here Home » WRITE WITH US » Bucket List Travel Dreams: Oktoberfest in Munich

Nobody told me Oktoberfest was a big carnival for families. Something I could find Â in my hometown of 15,000 riverside residents along the muddy banks of the Missouri River. The kind of place where the caravans quietly come in overnight and transform the place into a mini-amusement village before dawn.

As I walked down the main festival walkway at Munich’s famed Oktoberfest for the first time, all I could feel was childhood dÃ©jÃ -vu thousands of miles from home.

Funnel cakes and cotton candy wafted every turn. The carousel of pastel-colored horses marched in a constant circle. The screams and rusty swirls from the Tilt-a-Whirl drowned out the giggly, and somewhat creepy, clown house music that spewed from busted speakers inside the children’s rides.

Lining the main walkway were the same rigged squirt-gun and ball toss games that took my money years ago when I desperately had to win a stuffed Tasmanian devil. Oddly, or not oddly enough, the same hastily made prizes that started in Chinese factories apparently headed east across the U.S. amusement park circuit and continued around the world.

The only thing separating this scene from a Midwestern county fair was the lederhosen. Everyone was wearing them. It was myself, my boyfriend, his brother and his cousin standing out in our combination of jeans, polo shirts and flowing, flowery tops among the stampede of historic garb.

“You vant beer tents?” said a friendly German man strolling by in white and green lederhosen. He sensed we were lost American puppies looking for our drinking bowls.

“Ova dare,” he continued, pointing to our left.

Following his lead, we saw it. Jutting off to one whole side of the family fun fest was the adult entertainment – the booze. 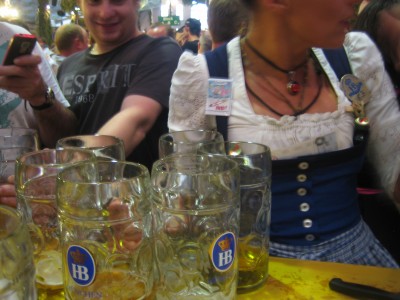 Beer tent after beer tent. The word “tent” is highly misused. These glorious wooden beer mansions stretch two-stories high and reach back far enough to house 10,000 people. The insides are hallow. Straw covers the floors and long-bench tables are the only occupants besides the people.

Every major brewery in Munich has a branded tent.

Spatenhaus. Hofbrau. Paulander. Lowenbrau. (I forget the rest.) The tents themselves all have patios with long benches of people to give you a preview of what is inside. 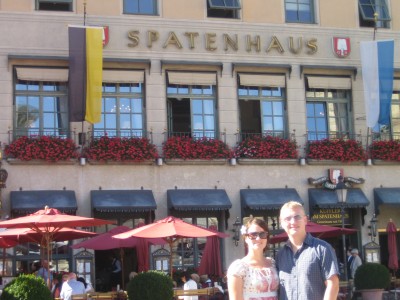 As we walked closer, the carnival music was replaced with polka favorites. Then when we went inside, the polka favorites became American classics sung by a choir of the world’s finest drunks. Sweet Caroline. Country Roads. Hey, Baby. We knew we were in the right place.

The Hofbrau tent spilled over with people standing and dancing at waist-high tables. Our wide-eyes kept looking around the room like an overstimulated freshman a their first college party. Good thing aÂ German beer maid in a blue and white dirndl spotted us the second we walked in.

“You want some beers, yes?”

We bobbled our heads up and down.

Our aggressive escort grabbed my boyfriend and tugged him into the crowd. We followed. She found us a table that looked like it had room for one, but she managed to smash all four of us in there. We quickly introduced ourselves to the Irish, Australian, Swiss, and German table mates before the contagious polka numbers had us all dancing, cheers-ing and spinning each other around. Hours later, the beer, the revelers and the music were still going strong. We forgot there were almost ten other beer tents just like this one filled with almost the same amount of people.

If there’s hope that the world can get along one day, I’d put my money where my mouth is and buy the world a traditional Bavarian-style beer. 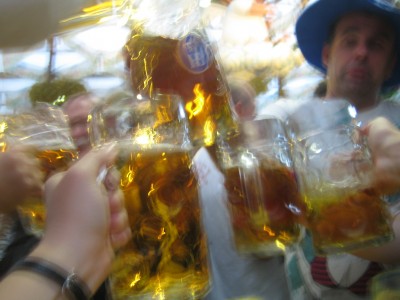 Munich’s Oktoberfest goes on for the last two weeks in September. On average, six and a half million people make the beer pilgrimage each year to help Munich consume 30% of it’s annual production of beer.

If you plan on going, I suggest:

Of course, if you can’t make it to Germany, there are plenty of local Oktoberfest celebrations to seek out in your hometown. Now that I kicked Munich Oktoberfest off my bucket list, but loved it so much, I am trying to go back to Germany next year to experience Oktoberfest in the lesser known parts.

What places are on your bucket list to travel to? 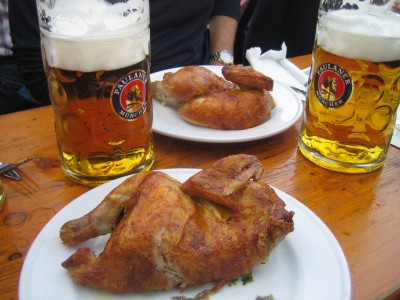 « Life Purpose: What If You Picked The Wrong Dream?
5 Ways to Cultivate Inner Confidence to Achieve Your Dream »