When I first started 8 Women Dream, I sat down and wrote my 150 lifetime goals, which included adventures on my bucket list.

Item number 39 on my list was, “I am driving Brian (my son) on a wonderful vacation to explore the Grand Canyon before he graduates.”

I’d dreamed of taking this trip while Brian was still in high school, but sometimes dreams have a timeline of their own. So one year past high school graduation, we knocked off bucket list item number 39 in June with a week’s vacation in the southwest, visiting both the South Rim and the North Rim of the Grand Canyon. 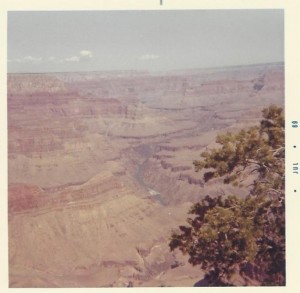 I first fell in love with the Grand Canyon in the summer of 1969 when my parents took my older brother and me to Arizona to camp throughout the southwest region.

Seeing the South Rim for the first time was a life-changing experience for me.

I felt small and insignificant staring out at the vast chasm Mother Nature had forged over millions of years.

I’d never seen pink mountains before and as a 9-year-old girl the idea of pink mountains meant that they must have been carved specifically with little girls like me in mind.

I thought they somehow belonged to me.

We would go again with my family when I was 16-years-old, this time visiting Monument Valley, several reservations and the canyon-lands.

My teenage trip included time camping at both the South Rim of the Grand Canyon as well as the North Rim.  I must have been your typical-hard-to-please teenage girl because my jaded recollection of the North Rim was that it was “boring” and “not as spectacular” as the South Rim.

My honeymoon would take me back to the South Rim of the Grand Canyon once again.

My husband at the time (and Brian’s dad) had never been to the Grand Canyon before and my wedding gift to him was to take him to see the grand pink lady of the desert.

This particular visit, instead of camping like my family had always done, we stayed at lodging right on the South Rim. It was April and still snowing in Arizona.  I hadn’t realized that Arizona could be so cold.  I had always pictured the Grand Canyon radiating heat in the middle of a hot desert year-round waiting to be explored by anyone who was brave enough to hike her sides.

We both laughed as we shivered in our summer shorts trying to take photos at the windy edge. Brian’s dad was just as memorized by the Grand Canyon as I had always been.  We shared a love of the southwest from that moment forward.

It would be my last visit to the canyon for 14 years.

In May, I was presented with the opportunity to get away for a week with my son, and I utilized the Internet to plan our visit to the South Rim and show Brian the southwest, just as my parents had done for me.  My ex husband offered to drive us in his sports convertible (this is another humor travel story of its own) and I couldn’t deny my ex a chance to see the Grand Canyon and watch his son experience it for the first time. 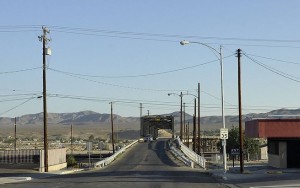 From Northern California, I chose a route through Barstow, California.

This city in the desert has long been one of my favorite stops from back when my family began our long summer vacations camping throughout the U.S.

Somehow we always managed to spend a night in Barstow, California or Ely, Nevada.

Because of the trucking industry, along with the railroad, the military, and the travelers, Barstow has some great hotels for the right price.

The hotel in Barstow didn’t disappoint, and we loved swimming in the pool after a day spent traveling in a car.  The only thing that bugs me about hotel pools is that some hotel managers prefer to keep the water the temperature of refrigerated ice water.

Cold water does feel good against the desert heat — once you get out of the pool — but I hate having to swim a bunch of laps in an attempt to get warm on a hot day and still feel cold when you stop.

From Barstow, we drove to Williams and stayed in Williams, Arizona for three nights.

Williams is 59 miles south of

The Williams train station deposits tourists into the downtown area, coupled with Route 66 enthusiasts twice a day, makes Williams a pretty lively little town with some great restaurants (the Singing Pig was on vacation… in June…) wild west shootouts, and an eclectic group of retail stores catering to Route 66 and Grand Canyon lovers alike.

The reason we did not stay at the South Rim of the Grand Canyon is because I imagined the South Rim would be as crowded like the morning commute at New York’s Grand Central Station — or an all- children-go-free-day at Disneyland — and just as noisy.

Hikers and outdoorsmen understand how to be with nature, but not so much the general public, so I wanted to keep some distance between us and the thousands of tourists looking for services at the South Rim at the height of the tourist season.

On the first day that we were ready to hike the South Rim of the Grand Canyon, we arose before sunrise (sunrise is at 5:15 am in this part of Arizona) and downed a quick, free protein breakfast in the hotel lobby.  I wanted us to head out early to hike the canyon before the crowds descended on the rim with their dogs, baby carts, bus tours, and shopping bags.

It costs $25.00 for a week pass to drive your car into the Grand Canyon. There are communities closer to the South Rim that cater to tourists and offer shuttles into the park if you are looking for a reason not to drive.

We parked in the large lot — so many people arrive during the day that the parking lots have numbers and their own shuttle buses. We were early, so parking was easy, and we’d packed a hiking lunch. Bring lots of water and salty snacks as the high altitude and dry air will dehydrate you quickly. 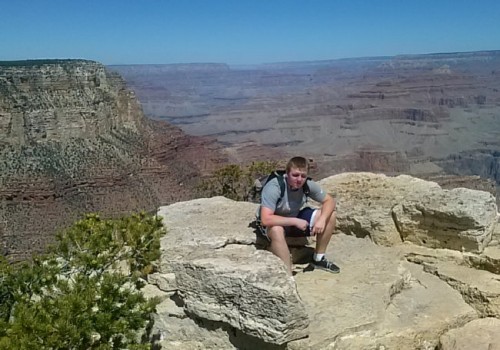 We began our hike at Mather Point and hiked up to Hermits Rest.

The expression on my son’s face as we approached the edge for the very first time was a dream I’d been visioning for years.  I fought back my tears of joy so I wouldn’t embarrass my 19-year-old son in front of the two female Swedish college students experiencing the Grand Canyon for the first time as well.

We stood there breathless for a moment, taking it all in. I was eternally grateful that almost a year ago I’d started taking Zumba classes 4 days a week, combined with Yoga classes 3 days a week. I was going to be able to hike the Rim Trail with my uber-fit son without holding him back.

That goal has to be somewhere on my 150 lifetime goals bucket list to cross off too!

We had our picnic lunch in the rocking chairs at Bright Angel Lodge, and by this time we had introduced our son to tourists from Spain, Scotland (he was biking the U.S.), Germany, France, China, Australia, Sweden, Switzerland, and Poland.

We were visiting the world without leaving the U.S., and I’d forgot about this particularly wonderful part of travel. 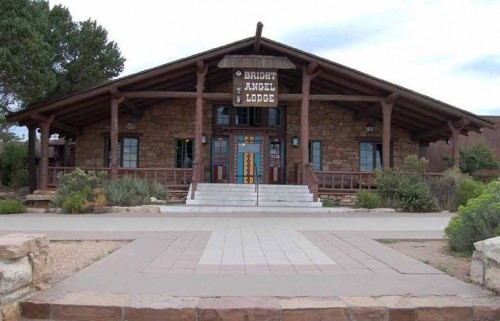 By the time we reached Hermits Rest we were ready to get on the shuttle back to the far parking lot. It’s about an 8 mile hike (I believe). Upon our return to the main entrance, all the parking lots were full, and tourists were arguing and honking over parking spaces. 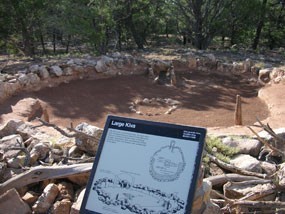 The Tusayan Ruin is the remains of a small ancestral Puebloan village that Brian wanted to walk around.

As we sweated in the blistering desert heat while walking throughout the ruins, Brian opened up and began to explain the reason behind the design of the settlement.

He detailed how they lived and how they entered their dwellings from the rooftops — without reading any of the signs.

I was struck by how much he had learned about our history and how excited he was to explore the site.  When he was 5-years-old, he would tell everyone who’d listen that when he grew up he was going to be an archaeologist.

He’s moved on to simply liking science in general, but I was intrigued at how much he knew about Puebloan life. I wondered how much this stop was going to change how he thought about college and his future.

Just when you think you know your kids the universe points out how much you don’t know them at all.

The Desert View Drive to Highway 86 and Cameron is my second favorite drive in the southwest, across the 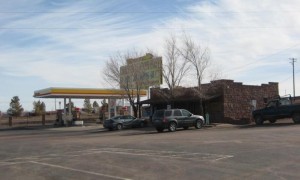 reservation to the gas station at the Trading Post.  This is the place where the southwest winds whip your hair like a cotton candy-making dish as it whispers ancient stories in your ear.

You imagine stepping back in time and what this area must have looked like before we populated it.  It’s still vast enough to make you feel like time has stopped and you are on another planet.

I yearn for our vacation to freeze at this moment to allow me capture it permanently in my mind.  It’s a once-in-a-lifetime moment.

Two cute college girls stop for gas next us, their giggling pulls me out of my daydream.

Brian rolls over in the back seat and drifts off to sleep, exhausted from the trip he wasn’t sure we’d ever make–moms and their promises (insert teenage-boy-eye-roll here).

There’d be other college girls to check out back home.

He was living his mother’s dream vacation and enjoying every minute of it.  So much so that he was completely worn out.

But for me, I was still too excited that I was living my dream.

More on the Grand Canyon next week…