Anyone who was or is heavy into comic books, Superman, or Seinfeld will know what “The Bizarro World” is.

For those of you who don’t, allow me to enlighten you.

The Bizarro World, also known as Htrae (earth spelled backwards) is a cube-shaped fictional planet that is home to Bizarro and his companions.  They rival Superman, Lois Lane and their children.

In other words, everything is opposite of everything on earth and all things “normal”.  Up is down, black is white, hello is said “goodbye” and vice versa.

Over the past few months I have been creating my own Bizarro world.

One night, I felt bad physically. My irritable bowel syndrome flared, my sinuses became blocked, and I felt exhausted. The only strenuous thing I’d done was worry about things I can’t control.

What scared me most was that my chest hurt — it hurt bad.

I took my blood pressure.  It was too high for someone who takes blood pressure medications.  I looked at the clock and thought, “OK, this may be a heart attack … but it could be allergy-related.”  My thoughts went a million miles an hour while my anxiety rose.  I grabbed my cordless phone.

I’ve had thoughts of paramedics since moving here. Mostly they happen in the wee hours of the morning when I experience symptoms of chest pain, shortness of breath, dizziness and thoughts of impending doom.  In the past, I’d feel the anxiety attack subsiding and I’d snap into the present, look at the paramedics and say, “Oh my God, I am so sorry. I wasted your time. I feel like a fool.”

Before pushing 911 I told myself, “If this isn’t a heart attack, and it’s just anxiety, I am going to be embarrassed if I call paramedics to come here … but if it is a heart attack and I don’t call, I will die.”

I made the decision to take the risk and die. 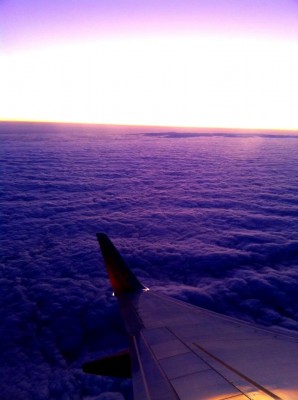 Photo by the awesome Andy Chou

My thoughts switched to how I felt about dying at that given moment. Part of me was scared to death (pun intended) while a bigger part of me was completely at peace with it.

I was at peace with myself.

Don’t get me wrong, I didn’t wish to die. I just felt like if I did, it would be OK, and if I didn’t it would also be OK.

If I died (figuratively), I would be born again and this is what I’ve been waiting to happen.  It’s not something one necessarily works toward yet  I know I have to kill off parts of me that don’t serve me positively before I can  accomplish some of my dreams.

So I died and the risk I took  to die helped me live much better when i woke up.

On the dream journey there can be things you dislike about yourself.  You may have many regrets.

Your dream can begin with a bang, then fizzle like a dud in a pack of fireworks.

You lay down your dream by the side of the road and say you will come back to it later.  You may become distracted because being distracted is attractive and comfortable. Those distractions can lead to another dream (or so you think it’s one) that you won’t fulfill either.

If this resonates with you,  I believe it’s because …

You have to die to live your dream

That night I thought, “If I live, what are the most important things to me?” None of my current dreams popped into my head. Not cooking; not traveling.

If we all did this, we’d accomplish our dreams.  There’d be no regret and the vicious cycle of “I can’t do this because…”

That night part of me died –figuratively.

I can’t explain the feeling I had, but it’s like no other that I’ve had in my life. It was clear to me that I needed to do what was best for me.  I needed to bust up the shit that ruled my life for years and interfered with my dreams. I knew in that second I had to get off of my ass and start working out again.  I knew that my weight had the potential to hurt me physically and prevent me from living the life of my dreams.

I have always been an athlete. What the hell happened? Despair? Trauma? Depression?

I can’t use them as excuses anymore.

Don’t let your unfortunate past harm your future dreams.

Your past can’t be altered and your future doesn’t deserve the punishment.

The day after my heart scare I went to a place that is very important to me and transcends me just being there.  A tennis court.

I had recently joined a tennis league because playing tennis was a dream I fulfilled a long time ago. I’d laid that dream down on the side of the road because after Hurricane Katrina, I had laid a lot of good things in my life by the side of the road.

Back in 1981 I won the New Orleans Open tennis tournament.

It was one of my greatest personal accomplishments. Now, 23 years later, even with lead in my ass, I still can hit a tennis ball that smokes when it hits the ground and I am proud to say that I am amazing on a tennis court.

My tennis group split up to one court for singles and one for doubles. I chose doubles first because I knew it would be better for me to build stamina and consistency again. The doubles court had 4 persons; 3 men and me.

The insecure part of me thought, “Are you kidding? These guys are going to leave you in their dust.  My tennis partner is so screwed with me playing on his team!!”

The more I thought that stuff, the more the balls I hit into the net.  My partner and I lost points.  Well, we actually had no points and had not won a game. We were at “love” in score. My old thought patterns were defeating me until the Bizarro Maria kicked in.

“Love means nothing to a tennis player” 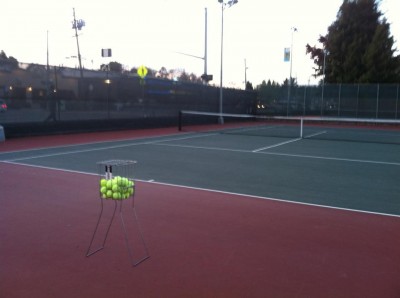 The more I visualized that saying on my t-shirt, the more focused I became on the one point, the one moment, and the yellow, fuzzy ball. I didn’t let it out of my sight. I started hitting shots that were unreachable.

It was Bizarro tennis.

I felt confident as I entered the singles court. I won my match.

When I got home,  my food choices were different.  I ate roasted seaweed and a plum instead a heavy, calorie-laden snack.

Think about your dreams as if you were going to die. What would be the most important things to you that would make you happy?

Start creating your own Bizarro world and see how things change for you  See how pursuing your dreams all of a sudden feels like a piece of cake instead of a chore.

Feel free to die (figuratively).  Look at the parts of you that have been around for too many years sabotaging your dreams.

Say, “Buh bye” to them.   You have every right to embrace them because in a way, they’ve protected you for a long time.  Then kill them.

Today I leave you with a Bizzaro Maria recipe. It’s something that is easy, economical, unique, enjoyable and most of all, guilt-free.

A chayote is known by a ton of names depending on one’s geographical location.  In New Orleans, Louisiana, they are known as mirlitons and are very popular during the Christmas Holidays.  Chayote is also very popular in Latin American countries.

It is in the gourd family and is a vegetable that can be cooked many ways.   Today you will learn how to stuff them without the guilt of 8 pounds of breadcrumbs.

I wish you a beautiful death so you can live your dreams.

Serves 2 ( as a small portion)

Boil the chayote until you can put a knife through it easily.   Cool the chayote in ice water. Season shrimp with salt, black pepper and thyme and saute in olive oil.   Remove and let cool.   Saute garlic quickly in olive oil and remove before it turns brown.   Split the chayote in half and scoop the inside leaving a bit of flesh to keep the “shell” together.   Scoop flesh into a bowl and mash with a potato masher.  Chop the shrimp roughly and add to the bowl with the sauteed garlic.   Stir well and taste.  Add some grated cheese but reserve some for the top.

(At this point, you can add some panko bread crumbs if you want the mixture tight but don’t add too much).

Taste and adjust seasoning.   Stuff the chayote shells with the shrimp mixture and place in a baking dish with a tiny bit of water, shrimp or chicken stock.    Top with remaining cheese and bake at 400 degrees until stuffing is heated through and cheese is bubbling on top.

In New Orleans,  this was a regular on the menu in my home.  My mother would serve it with buttered angel hair and a salad.   If you don’t mind the carbs, this is an awesome combination.   By the way-  the entire chayote is edible so you can eat the shell and have a happy plate when finished.

Just make sure the chayote is boiled long enough where the entire vegetable is tender. 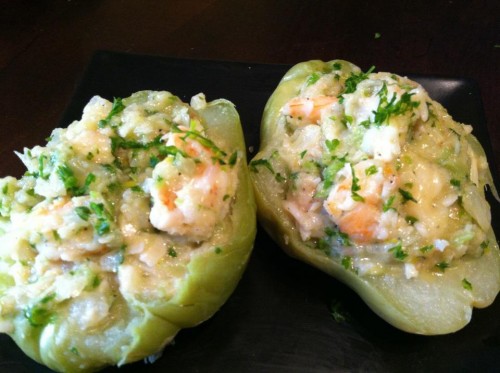 « How You Can Save Money for Your World Travel Dreams
Women’s History Month: Dream Inspiration from Top Women in Triathlon »