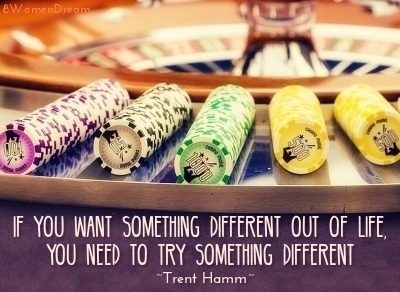 If you’ve ever tried, without success, to bring order to a chaotic financial life like I am attempting with my dream of financial success, perhaps you’ll resonate with my sense of gritting my teeth and girding for battle.

I have been reading The Simple Dollar: How One Man Wiped Out His Debts and Achieved the Life of His Dreams, a book about how one man (the author, Trent Hamm) got himself out of debt. It’s a well-written, interesting book, but I was thinking it doesn’t apply to me because I don’t have a lot of credit card debt.

See, years ago, I filed bankruptcy from the depths of a divorce, and I’ve never really gotten back on the credit bandwagon. I could have gone there, but didn’t, and I have some pride over it too.

Except that I still possess a credit card mentality.

It’s not strictly true that I live without credit. Credit is not just a thing that arrives with an approval letter, a limit, a pretty plastic card, and a monthly payment. No, using credit is actually a psychological behavior–one in which I blithely live, but which I did not see until just this week.

My version of a credit-card-frame-of-mind is borrowing from an outstanding bill to buy something I want, like an organic Christmas turkey. Let us call this credit card,

So I’m a little late with the utility bills, what can it hurt?”

I bought my turkey this year with the money I owed to the electric company. The electric company won’t be back to ask me for it again for a couple of weeks, so where’s the harm? Well, I got out the current electric bill and I see that I am habitually 30 days late.

Possibly I bought last year’s turkey from the money I owed to the electric company too, and I’m still paying for it. I’ve been one payment behind for a really long time. And guess what? Whenever I’m late, I get charged a late fee. The late fee averages about $7.00–not so bad until you realize that a year of $7.00 charges is $84.00.

A look in the frank, unwavering eye of reality reveals that my Christmas turkey cost me $44.00 (because it was a fresh organic one), plus $84.00 in late fees. Gosh, that’s some sumptuous turkey.

Borrowing from my electric bill is really no different from charging the turkey on the Discover credit card. Ow, that hurts.

Using credit is a habitual way of thinking and acting. A life philosophy. A monkey on the back of personal finance mastery. The credit way of life involves spending before earning, making the smallest payment possible, and waiting to pay until the very last minute (or longer, even). Credit cards wear many more faces than the Visa logo.

The face on my personal credit card frame-of-mind is:

I can be a little late with the utility bills, what’s the harm?”

This means that you borrow from a bill until you get shut down, and then you pick some other bills to borrow from in order to get your service restored. Maybe you’ve been borrowing from the cable bill to pay the phone bill for a couple of months, but now the cable company has caught up with you and “interrupted your service.” And to get the cable back up and running in time for tonight’s SF Warriors basketball game, you have to pay your entire past due balance plus a reconnect fee of $234.00, billed in 6 convenient monthly installments, complete with a small convenience fee.

Stop the hamster wheel! I want to get off!

Also known as the “tomorrow is another day” frame-of-mind. It goes something like this. There are still 3 years, 4 months, and 29 days until your oldest child starts college. Who knows what could happen between now and then? You could win the lottery, or said-child could become a professional golfer and forgo college altogether. Better to borrow from the intended but as yet unrealized college fund that you might not even ever need, to pay the cable bill, so you won’t miss the Warriors basketball game.

Note: See Whoever’s yelling the loudest above. It is an unfortunate truth that the credit card fame-of-mind tends to attract one another.

Named in honor of my pernicious yarn-hoarding habit, which has led to a very large collection of wool yarn piled up in my office. So named because of the danger that a loved commodity (say, wool yarn) may not be around forever, therefore we must borrow from the grocery money to get it now while it’s still available.

There must be someplace left in here where I can wedge in another couple of skeins.

The kids? Let them eat cake. Or refried beans.

4. The “It Was on Sale, So I Bought Five” Credit Card Mindset.

Expressly tailored for the post-Christmas season, but valid year-round now that retailers will stop at nothing to get our attention. We will worry about paying this year’s tax bill on April 14, an eternity from now, but today we will buy five reduced-price cast iron sandwich grills, because when are we ever going to see a price this good again?

Not in this lifetime, that’s for sure.