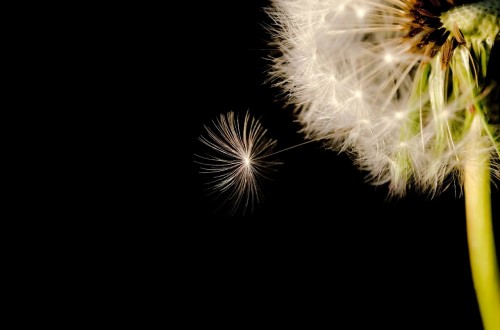 It’s the end of another year spent dreaming.

Without a doubt, there are those on this 8 Women Dream team who would make an argument that my dreams are very big to them, but I am not so sure about that.  I’ve been thinking about this for some time now and I am not one to shy away from a bit of self-reflection at this time of year and pause to think about what I want next year to be like.

I am one of those weird people who has a bucket list of 150 life-time goals.  I review them at the end  of the year to see what I have accomplished from the list. Some years I am surprised by how many lovely goals I can check off the list–even shocked by how easily the goals were achieved.

Then there are those years where nothing on my bucket list is crossed off.

It’s during these times that I shake my dream journal and wonder how this could possibly have happened. I shudder, as I pause and reflect on the fact that my father died at the age of 49. I then grow angry at myself for letting a year go by without stretching myself and my life.  I question why I ignored my lesser dreams for a year.

Two years ago, my mother became ill and everything within the family shifted as we were told we’d be losing her. This was definitely not on my bucket list.  It wasn’t even on anyone’s radar.  It’s one of those life-moments that flies in out of the blue and gives you and your life one hell of a black eye.  Your heart sees stars.  We shouldn’t have been as shocked as we were because our mom is in her late 80’s, but the prognosis and the fact that it happened so suddenly left my family scrambling to adjust.

She’s recovered somewhat and the retired nurse in her set out to prove all of the doctors wrong. But that doesn’t mean that she needs less help.  Priorities in everyone’s lives had to be shifted so attention could be turned to her care. My older brother and I are luckier than most because we understand what it means to lose a parent and have walked this path together once before.  It doesn’t make this second journey any easier.

It doesn’t mean that I can handle it all that well.

My big dream for an online publishing group geared for teaching women to take the kind of risks in their lives that men take for granted in theirs seemed so big and veracious in scope when I first thought of it.  Then just as my dream and this site seemed to be skyrocketing, my mother became ill.  My big plans fell silent as I began to help care for my mother. It’s the reality of the situation. 8 Women Dream has reached many milestones in terms of visitors and followers and it has been poised to launch into the Internet stratosphere. 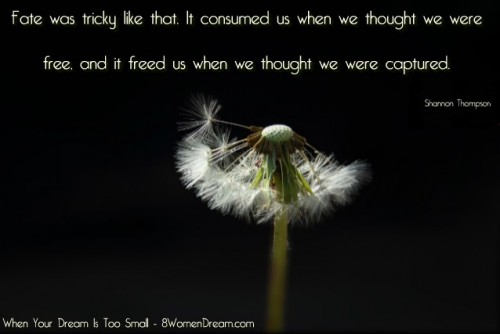 The milestones far outpaced my original dream plan, but when they were accomplished I realized it wasn’t enough.  8 Women Dream wasn’t going to get where we needed it to be in terms of size and influence.  The Internet was moving and growing at a faster clip while my energy was being drawn away towards my mother.

In that place of obligation and responsibility I saw that my dream was too small and I froze.

How did I see that my dream was too small?

I just had to open my eyes and read the news.  It’s amazing what the news can tell you about your dream if you are willing to look.

Take for example, Joshuah Bearman and Joshua Davis, two writers living the dream. They are accomplished practitioners of big, nonfiction magazine writing, they have been regular published writers on Wired, The New Yorker, Rolling Stone and many other A-list titles. Perhaps more important, they have, between them, optioned 18 of their articles for films, with two more in negotiation. On Monday, Mr. Bearman and Mr. Davis are introducing “Epic,” a kind of online literary platform that will commission and publish big, nonfiction narratives that might also make good movies.

They are trying to build a model for long-form journalism where the revenue generated over the entire life of a story — magazine fees, sales on Audible.com and Amazon Kindle Singles, ancillary film and television rights — can be used to finance the costs of reporting. (Source: New York Times)

During this same time, Evan Williams, a big player in the creation of Twitter and and a creator of the Blogger blogging platform, wanted to return to his blogging roots (apparently he thinks blogging isn’t dead to which I never thought so either–HA!) and he has created, “Medium,” a place where stories are “made and read” online. It’s a new blogging platform, and anyone can contribute, with writing on all manner of topics. The posts that gain attention, often on Twitter, are displayed prominently and gain more traction as readers and contributors weigh-in. He is also a backer to Joshuah Bearman and Josua Davis’ project: Epic. (Source: New York Times)

Sounds just a bit like 8 Women Dream–a place where real dream stories are shared with and to be judged by the world.

Then there’s Jonah Peretti, one of the founders behind Huffington Post, who launched Buzzfeed about the same time that I launched 8 Women Dream, but Peretti decided to raise his first round of financing when the site hit about 600,000 monthly unique visitors (Source: Business Insider). And now BuzzFeed is read by over 30 million visitors a month and has become the media darling that changed how popular content is judged and shared online.

And during this time Huffington Post (a blog-COUGH) was sold to AOL for 315 million.

Now granted, these mostly-men-media entrepreneurs have financial backing and their own funds which enabled them take bigger risks earlier in their games.  But maybe these entrepreneurs are just big risk takers from childhood.  Maybe they are different from me.  I could also make the argument that start-ups and online ventures are still a mostly-male species activity, except, I would be lying to myself because women are making great inroads online and have been doing so for some time now. 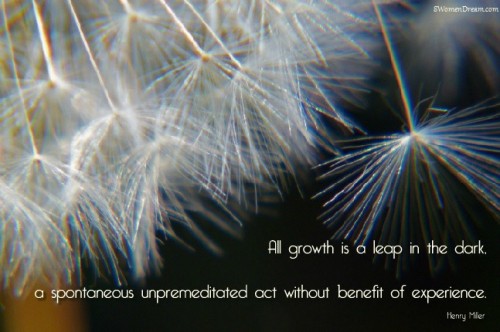 What I see by reading these uber-tech entrepreneur dream stories is how much bigger they think, and although you should never compare your apples to someone else’s gold, I can look at what they’ve done and see where I am applying breaks to my dream. (Insert swallowing painfully big pill here).

Dreaming big requires more than good planning and placing a dream on a vision board or on a dream bucket list. It requires that you take action and be willing to look at the ways you hold yourself back. If you don’t dream big enough then you will never take the big risks necessary and you will flounder at putting yourself all out there to risk failing spectacularly in front of the world.  Dreaming big requires a willingness to risk shame and align yourself with others who think bigger than you do.

I am at this place, this crossroads of sorts, where I can see that I am stuck. I am stuck in the safety of what I know up to this point. Security matters to me. It always has–and the security of my son and his dreams matters to me even more. But am I using it as an excuse not to risk big?  In being stuck and admitting that I am doesn’t mean that I am thinking of quitting–only that I know that I need to change things up in 2015.  I can see that the way I see at my dream is too small.

Some might argue that this is natural considering the grief I have been processing and the shift of my life to being part of the generation taking care of their parents while they still have children in their homes.

It’s only one part of my dream story and everyone who tries to launch a dream gets stuck from time to time.  It’s when you reach the point of forcing yourself to try something new.  Life will happen to you while you are busy dreaming so you can’t let what happens to you while you are dreaming be an excuse to stay stuck.

I need a mentor who dreams bigger.

I am now thinking that my dream for 2015 should be about finding a mentor. It needs to be someone who has the experience to advise me on what steps I should take next.  I believed at one time that I found such a mentor only to see how this person is lost in their own sea of problems.  I also don’t need a mentor who is blind to my talents–especially the ones where I am most confident–while making huge mistakes of their own.

I’ve come to realize that if I want to be braver and bigger in 2015, even while my heart aches over my mother, I must find a way to align myself with a mentor who sees me for my possibilities and can advise me on moving forward.

I have to now think bigger to find the right person.

« Year in Review 2014: Look Back at Your Fitness Achievements
Finding Happiness in Creating A Magical Year »