At the end of 2012, as everyone was working on their New Year’s Resolutions, I declared that 2013 would be EPIC for me. I am totally committed and on the path to live my biggest dreams, and I had a feeling that this year was going to be something special.

Little did I know what was actually in store for me as the year started off with dreams coming true like fireworks exploding, my life taking off like a rocket…

It all started with a Christmas vacation with my family in Florida. My parents own a condo in Fort Myers on the Southern Gulf Coast of Florida, and we were spending the holiday there.

Fort Myers is a sleepy town full of retirees older than my parents, more like my grandparents’ generation, and it’s beautiful yet not very exciting. Still, we enjoyed a low-key Christmas together with my brothers both in town for the holiday as well.

It was after Christmas that all the magic started to happen, as I declared that my year would be magical, and the magic indeed started to unfold.

The first sign of it would take place during a trip to Key West that my parents arranged as a Christmas present for all of us. I had not been there, to the southernmost point in the United States there in the Florida “Keys,” since I was a very little girl.

I had fond memories of the Keys’ from childhood – memories of warm shallow water that stretched away from me seemingly for miles… I remembered palm trees and snorkeling, and knew I would like returning there.

Of course I did not expect the epic snorkel adventure that ensued on the island – who would have?

I write all about that – surviving swimming with the sharkers and accidentally ending up trapped in the breakers by the live coral reefs – here.

Getting saved Baywatch-style by my hot snorkel instructor was fun, but it was a nerve-wracking experience otherwise. And yet liberating somehow, because every near-death experience I have ever had has further freed me up to feel like I am just here to live my dreams on this planet, period. And nothing will stop me from doing just that!

Those who have followed me for a few years now on 8womendream know that the “Big Dream” for years has been writing and publishing my first bestselling book. The good news is that is still in progress, and I am working with my mentors Marci Shimoff and Janet and Chris Attwood to write a book proposal and find an agent.

In the meantime, however, I have launched PART II of an “Old Dream” in my life, which suddenly, unexpectedly had a rebirth…

Some of you know that I was a professional swing dance performer and instructor for five years, beginning in 1999. I have studied all different forms of dance for a few decades now, including lindy hop, belly dancing, flamenco, salsa, African dance, tango, hip hop and more.

Dancing has always been one of greatest joys and it was one of the other “Big Dreams” when I was a little girl – to be the “back-up signer and dancer for Prince” was the goal way back then.

Now it’s coming true in an even bigger and better way than I ever could have imagined, and way later in my life than I ever imagined! It really is never too late for your biggest dreams to come true! 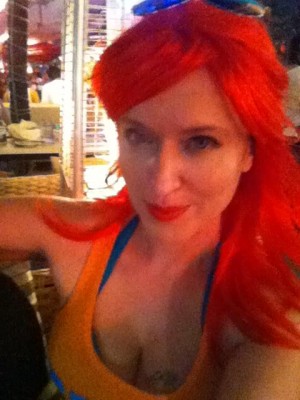 Some of you may have heard of Cassius Clay, which was Mohammad Ali’s name before he recreated himself as the greatest boxer in all of history. There was a PBS series a few years back called “BORN IN MIAMI,” about Mohammad Ali, who was “created” when Cassius Clay reinvented and renamed himself in that city.

There must be some kind of special superstar magic in Miami, because it is the city where my new alter-ego, FLAME Marilyn, was also born…

I headed to Miami after my family’s Key West trip, and had been planning to be there for months for a lindy hop dance event that was taking place during the weekend of January 19-21. Little did I know that by the time I arrived at the dances in Miami and Fort Lauderdale that I would actually “be” a new “ME.”

The Birth of Flame Marilyn!

FLAME Marilyn was born on January 9, 2013 in Miami, at a restaurant called the Big Pink. I was  having breakfast there with my friend Nic, who I had met at the Jazz Hostel where I was staying, and with Nic’s roommate.

I had purchased a flaming red wig the day before and was wearing it around town just for fun, since Miami seems to be the kind of place where one can easily get away with such things.

And indeed, as I walked the streets of Miami in a flaming red wig and Marilyn Monroe inspired vintage outfits, including fishnets and stilettos, people stopped me to take pictures with me, offered to hire me for modeling gigs, and asked if I wanted to be featured in a spread in their magazine on more than one occasion.

Basically, I walked around, had fun, chatted with people, and got hired! Not bad for a “day’s work” in Paradise, in those eighty degrees and sunny perfect Miami January days.

More Gigs Than You Can Shake A Stick At!

Suddenly, when Nick had the genius idea at breakfast to call this new alter-ego of mine “FLAME Marilyn” (“flame” like fire for the flaming red hair, and “Marilyn” like the pin-up icon and actress Marilyn Monroe), she was officially born! A few days later, I launched my FLAME Marilyn Facebook page (click here for that).

Since launching the Facebook page just over two weeks ago, more has happened than I can even detail in one blog post, so I’ll continue to tell the story of the latest adventures in next week’s post. I’ll just highlight a few of the major events that will be taking place for me in 2013 that I have lined up since the birth of FLAME Marilyn:

And this, my friends, is just the beginning…

2013 is EPIC, Indeed… MORE TO COME in next week’s post about this year’s epic adventures of living my biggest dreams – in the meantime keep on living YOUR dreams out loud here!

« Fitness Dream Challenge: Should You Workout Today?
Dream of the Best Kind of Happiness »