I started my first blog back in 2003. It was back in the dinosaur days when people were using dial-up and the Internet was the equivalent of wild-west.  It was a time where meeting people from your online world made you a freak to your family and friends.

Starting and running a blog was fun and exciting.  The idea of being in control of publishing your own words for the world to see was mind-boggling. Blogging has morphed and changed so much since the days of chat rooms and Yahoo Conversations.

Blogging has certainly changed my life.

I’ve spent the better part of the last five years helping writers and entrepreneurs understand why they should be sharing content on the Internet and the possibilities that sharing content can create.

Recently, a documentary called, American Blogger released its’ movie trailer out to a shitstorm of criticism from bloggers, media, and the people who still love to read blogs (yes, they do still exist).

The film is supposed to be a documentary about American Bloggers, except that the filmmaker seems to have ignored some of the most famous, groundbreaking bloggers in the U.S.

What angered the public most about filmmaker, Christopher Wiegand’s documentary piece is that his wife, Casey Wiegand is the blogger he chose to focus his story upon – along with 50 of her female blogging friends – all representing the same niche as Mrs. Casey Wiegand:

The negative hoopla online is centered around the thought that the chosen female bloggers look a little too “Carey Bradshaw-ish” (Sex and the City ladies – it hasn’t been that long) by the majority of the public who have weighed in on the release of the trailer.

“I’ve said from the start that this entire project just seems like a way for the Wiegands to circle jerk with their blogger friends. This has to be the most self-indulgent tripe that has come out of the blogging world to date, and I don’t understand why it needs to exist or what it offers to the world of cinema. But hey, some hipster got to take a road trip in his Airstream and call himself a filmmaker, and a bunch of bloggers got to rhapsodize about their own importance. Hooray, Internets.” (Thank you GOMI)

You can check out the American Blogger trailer here:

As disappointing as the choice of bloggers (mostly female, white, mom bloggers) seems to many, I am frankly thrilled someone has actually bothered to highlight what I have been saying for years to writers and entrepreneurs about sharing something interesting about what they do, or who they are on a blog.

My second life was born out of blogging. And as much of a pain-in-the-ass it can be, especially when life gets in the way, I don’t believe I will ever stop being a blogger.

Lost on many writers who blog is the amount of fortitude it takes to blog year in and year out until success is achieved. Blogging is about changing and growing as an artist.  It’s about the constant striving for improvement that changes you. Blogging is publishing and publishing has a high set of standards. Aiming for the standards on your own can create an amazing life.

Blogging is also a very real commitment – a commitment that could take you 7 years to see any recognition for your efforts.

All fun aside, famous bloggers do care about their readers and are concerned that what they are offering the world has value. They know they have to produce interesting content on a regular basis and continue to stretch themselves in order to make a living at blogging.

Simply slapping something online for the world to glance at and call it blogging is not the same thing as what these ladies (and many bloggers) do.

At least a filmmaker is finally talking about blogging.

I would like to add to the shitstorm conversation that I am disappointed over the fact that Wiegand didn’t select bloggers from a more diverse list — like men, elderly, famous, and the ones who have been blogging since the beginning.  I’d love to see a discussion about why most of the top bloggers in the world are men.

Is this his reason for picking his wife and her female blogging friends?

Is this movie simply a clever way to bring publicity to a collection of bloggers who are smart enough to get that they must ban together in support of each other in order to survive in the vast pool of Internet distraction?

He does seem to make a pretty film trailer.

Why Wiegand didn’t do a more comprehensive documentary on blogging, travel to other countries to see how blogging has changed the lives of writers, and interview the trail blazers who first brought blogging out in to mainstream media is lost on me. 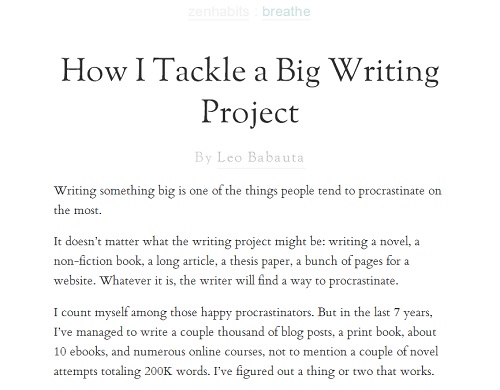 But it’s the way he conducts his blogging that makes him popular.

Readers first. This is my No. 1 rule, and it has served me extremely well. When I have a question (“should I promote X or not?”) the answer is always, “What would my readers want? What would help them most?” When the choice is between making some extra money or my readers’ interest, the choice is obvious. There is no choice. I can’t tell you how many times I’ve passed up being part of a mega-sale or affiliate marketing campaign that would have earned me $50K (and sometimes much more) in a day or two if I’d decided to participate. I’ve walked away from at least $1M because it would have put profits before my readers. And I think my readers trust me more because of this.

Leo’s Zen Habits is listed as one of the top 25 blogs in the world. 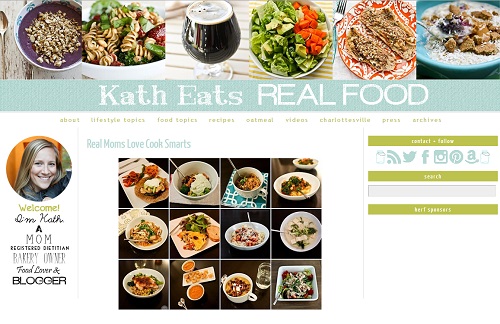 OK. She’s a white, mom-type blogger. Bite me. But her blog Kath Eats Real Food is a good example of how sharing content online evolves. She is completely transparent in what she does.

In her own words:

I started blogging in March of 2006 at Calorie King as I set out to lose 30 pounds. A year and a half later, at the request of family and friends, I decided to start a photo blog of my recipes and meals. I began blogging at Blogspot in September 2007, which then moved to WordPress, and finally to my own domain, KathEats.com. After working in public relations for a few years, I went back to school to become a Registered Dietitian in 2008.

For five years, I blogged THREE TIMES A DAY: breakfast, lunch and dinner.

Kath’s KERF blog is listed as one of the top 25 blogs in the world.

3. Bacon is Magic by Ayngelina Brogan 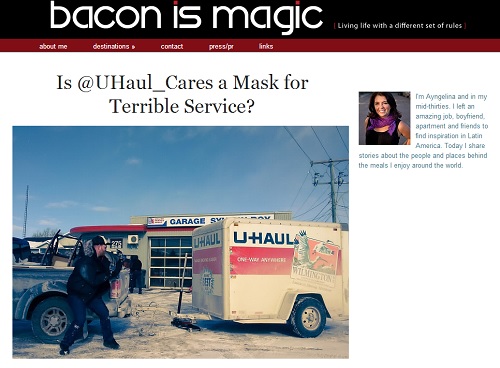 Yes. It is the word bacon that first drew me in.

Ayngelina Brogan is a Canadian travel blogger and frequent solo traveler (don’t get me wrong I absolutely love fellow dreamer, Natasha’s travel blog) but I list this blog because the name is too awesome to ignore.

Blogging is supposed to be a bit pithy.

Ayngelina’s story is the story of bravery.

I left an amazing job, boyfriend, apartment and friends to find inspiration in Latin America. Today I share stories about the people and places behind the meals I enjoy around the world.

In spite of her fear she took a chance on her big dream and decided to write about it:

The fear was petrifying but it was not paralyzing. As much as I was afraid to go, I was more afraid to regret not going. I traveled solo through Latin America trying to figure out what my life is all about.

I also love her photographs.

4. Oh She Glows by Angela Liddon 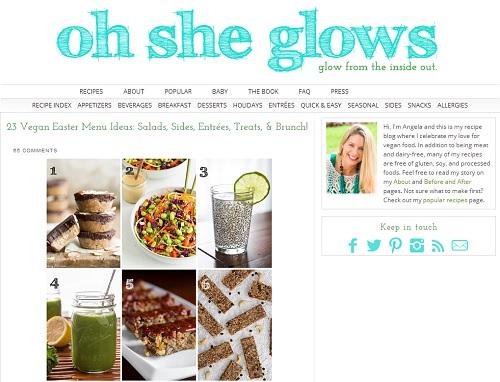 Oh She Glows is an award-winning vegan recipe website created to please vegans and carnivores alike. But to me, it’s everything a food blogger’s website should be.

Staring at it makes me feel healthy.

Angela started her blog on October 31st 2008, to share her recovery from an eating disorder and her journey to health, and the amazing transformation it created in her life.

She is another blogger who shoots amazing photographs of her process. I am still working on my photography … it’s about equal to how I am on a cell phone. I was never good with small gadgets. Just ask the men I have dated. 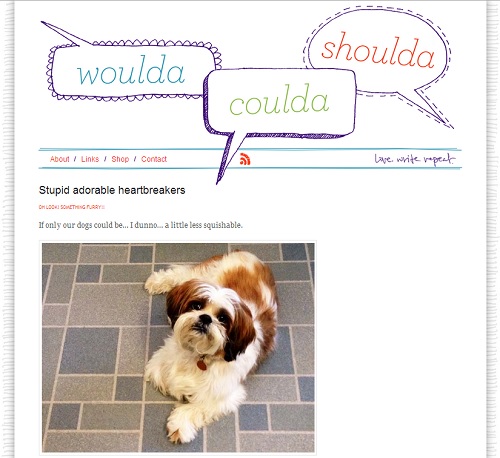 Maybe I’ve always liked Mir Kamin because she is a former geek girl who spent time working in the mortgage industry. (HEY! It’s my twin!)  But honestly, it’s because she is one of the original female bloggers online. She started Woulda Shoulda Coulda in 2004.

Mir wrote honestly about her divorce, single parenting, unemployment, and in her own words:

“… a whole boatload of squelched hopes and expectations about my life and who I want to be when I grow up.”

Leaving Mir out of a documentary about women bloggers boggles my mind the most. She was there in the beginning of blogging with Heather Armstrong of Dooce and Penelope Trunk of Brazen Careerist and the rest of us who were crazy enough to start blogs way back when.

(I should also mention the blogs by fellow 8 Women Dreamers, especially Kelly and Natasha who run successful blogs and are making an income because I love them.)

I’m not quite sure what to think.

Blogging is more than what the world believes it to be and this film opens a window into the life of bloggers. It’s more than simply a way for writers and entrepreneurs to self-publish and learn the publishing industry. It’s about caring for the public. It’s about sharing what you love.  It’s about artists who, through blogging, learn to quit focusing on themselves and instead, look at what they have to offer the world.

Blogging is a lesson in humility and growing as a person.

I am not going to enter the shitstorm by judging the American Blogger documentary until it has been released and I’ve had a chance to see it. Who knows, maybe it will spur some production company into creating a film about the history of blogging, just like Robert Cringely did about technology with Triumph of the Nerds.

You would be impressed by how many dreams blogging has made come true.

And that is worth shining a light on blogging.