You Are Here Home » LAUNCH YOUR DREAM » Wait: This Really is About Being Successful Online – Not My Family Vacation

The drive between the North Rim of the Grand Canyon, known as highway 67, across the top of Arizona on to 389, into southern Utah on 59, down to 15 to the Las Vegas Valley is a spectacular feast for your visual senses.

There’s the high grasslands still green against ponderosa pines and colorful aspens at the beginning leading into pink desert to chiseled mountains like the Cantaan leading up to Zion herself across through the desert in Utah, then winding through the Virgin River Gorge down to the tall neon city that is Las Vegas.

It was on this particularly breathtaking part of my recent road trip where I thought a lot about technology, the Internet and a decent web presence for what you do.

This was not my intention.

I’d disconnected from television, my phone, and technology (except for my digital camera) because I’d learned eons ago (thanks to my parents dragging me an my brother to see all the state parks and vast landscapes they could find) that completely disconnecting while on vacation induces a rejuvenating rebirth of the soul.

Stresses evaporate, the spirit sours and your life slows the hell down. 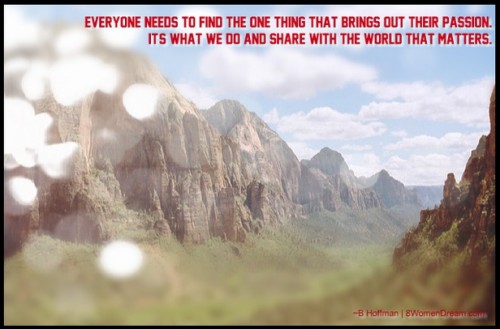 I surmise that I must have been staring too longingly at Mount Zion–trying to figure out how to fit in one more amazing site to an already tight ending to our vacation–because as we shifted into the sleepy town of Hurricane, Utah, the car began to shake like a small California earthquake.

We were suddenly forced to make a pit-stop at the local auto repair shop.

This is the point where I was re-indoctrinated back on to technology.

I found the local auto garage with a combination of a smartphone, web browser and GPS ap. I think getting a date with Johnny Deep would have been easier, but I managed to locate the right street and navigate us to the location, only to be told no foreign parts existed in the entire town.

I was forced back on to the Internet via smartphone and this is would be the start of seeing what it means to be successful online when you are on the other side as a consumer desperate to find information quickly and accurately.

Everyone who looked at the engine surmised that the shaking was probably due to a coil and directed us to the next “bigger” town of St. George, Utah, 25 minutes west, since apparently that town had heard of foreign car owners before. No business referral was given, thus my game of cat and-search-the-Internet-between-cell-towers-from-the-passenger-seat mouse game began.

Holding a phone out the window above a roof of your speeding , shaking car to find a decent Internet connection strikes me as not a great way to find an auto repair shop.

I doubted that girl on the pink motorcycle representing a certain cell company driving around the US by all the cell towers had never been through the Southwest.

I began our repair shop quest with Google search using a specific set of keywords that I was certain would bring me a list of foreign auto mechanics in St. George.

However, we were traveling through the land of semi-trucks moving America’s goods to Vegas, so the only foreign repair shop that appeared on the first page of search was for foreign big rigs followed by all the places you could buy a semi-truck in St George.

It was like my father was reaching out from his truck driving, car-crazy grave to make us pay homage to semi-truck drivers and heavy equipment operators (that’s another story in itself) everywhere. 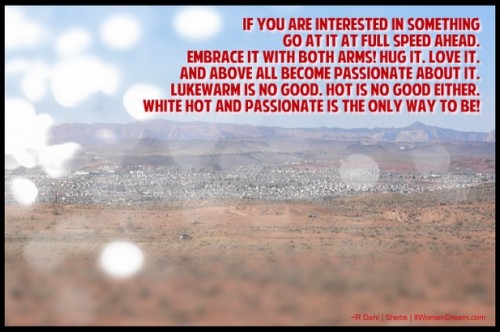 Before I could utter, “Gosh. I love the Southwest!” we were in St. George and with no ideas, I began looking for a foreign car dealership and the same big rig foreign repair shop kept coming up, so in desperation we decided to drive there in the hopes they could tell us of a good foreign mechanic shop in town.

I don’t think this is how the Internet is supposed to work.

All horizontal, then vertical switching of the phone in order to read made me want to roll down the window and throw the phone out into the desert, but that had more to do with cell tower connections than Internet content.

It was easier back in the day when you could call an operator and she’d simply connect you with the business that you needed.

In cold silence we drove to the foreign semi-truck repair shop so they could send us to the actual repair shop we needed, which included twice having to drive through some weird circle-looping, panic-inducing, roundabout interchange where if you screwed up you’d end up in Texas still looking for your destination.

I had only been back on the Internet for 45 minutes and I needed to start my vacation all over again.

The semi-truck repair shop wrote the name and address of the mechanic he thought was the best repair shop in the St George area on to a Post-it note and I was forced back into the GPS to route us to where we needed to be.

Trusting GPS when you’re stressed is the stuff that double martinis are made of and we hoped we’d end up where we were supposed to be.  I wondered if this is what the Internet was like for anyone who didn’t butt up against Silicon Valley like we did back home.

Luckily for us, the shop we were sent to gave us the most amazing service I have ever–and I am talking ever seen! The owner had it going on and had the car repaired in 30 minutes. He literally pulled a car off the rack, put our transportation up and had his senior mechanic fix it within minutes. He sold foreign parts, so there was no waiting three days in the desert for some part.

They took the car for a successful test drive and voila we were ready for Vegas.

I told the owner, who was actively involved in getting us back on the road, the keyword phrases I had used in Google search and how I did not find them so that he could include the keywords we used in his website.  He noted it and asked me for a Yelp review.

He knew that being found on the Internet is an important part of his success–even if you are a road traveler passing through town.  He accepted feedback and you could tell he was a guy that would contact his web person and by the time I got back home, they’d show up for the search terms I used.

When I got home and looked up my search terms — there he was now at the top.  I reviewed his website and noticed all the traveler’s notes about how this busy repair shop had helped them get back on the road too.

I discovered an online community of fans that extended out to San Diego, California, on to Denver, Colorado, and as far as Minnesota and North Carolina thanking them for saving their traveling butts.

They understood the most important rule of online success: be passionate about what you do and perform at your very best both online and off-line.

The quality of the service and the way we were treated is every bit as important as it was to be able to find them right away on the Internet when you are holding your phone out the window on an interstate looking for at least two bars on a cell phone.

Even though I needed a break from technology, I met some pretty great mechanics, who I am now forever connected to via the Internet, which seems to now be a life-long truth about me.

Do your online thing passionately for the people you want to connect with.  Give it your absolute best.

Don’t be satisfied with simply showing up because you feel obligated.  Always think of your potential visitors.  Think of them how this repair shop thought of us: we were customers they were saving the day for and creating evangelists for life.

And judging by all the positive comments about them online, they do this day in and day out for weary travelers with foreign cars.

They love what they do for a living and love taking care of their customers.

Connect with your visitors.  Treat them like they are the best thing ever.  Who knows, maybe someday you will be part of a story about a parent’s loving family trip that was 100 percent for their 19-year-old son, who wanted to show him Las Vegas at the end of their trip and you made it happen.

And the parents went out on to the Internet to tell the world how great you were.

That is also success. Period.