If you had the opportunity to ask your dream mentor 8 questions, do you know what they’d be? Do you even have a dream mentor? If not, why? 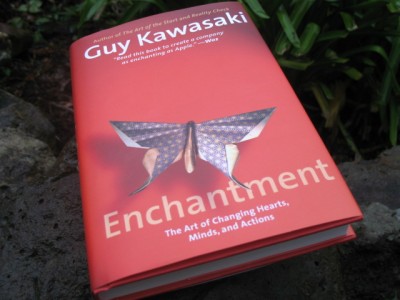 1. Why write this book (Enchantment) at this time?

Two reasons: first, my editor said it was time to fulfill my two-book deal.

Second, I finally accumulated a critical mass of knowledge (over thirty three years) to write a useful book about how to enchant people. I started the research in 1978. When people ask me how long it took to write the book, I don’t know if I should say “one year” or “thirty three.”

2. I’m not sure it’s possible to be enchanting in all situations. How do you”enchant” your way out of a bad situation with an abusive boss, or work environment?

I agree with you. Enchantment won’t work in all situations. It is but one technique. With an abusive boss and environment, you may have to find another job. Once you get to a fresh start, I can sure help you though. Maybe I can even ensure that a bad situation doesn’t occur again.

3. Has there ever been a time that being enchanting backfired on you? If so, what did you do?

Asking me if enchantment ever backfired is equal to asking me if being likable and trustworthy and trying to make something great backfired. I can’t recall any specific instances, but I’m sure this has happened. However, even if it does happen, what is the alternative? I’m surely not going to act unlikable and untrustworthy and purposely create crap. That will backfire much more often.

4. How can Enchantment help someone who is feeling like giving up on their dreams?

First, Enchantment can provide examples of how other people succeeded. Once Roger Bannister broke the four-minute barrier for the mile, a bunch of people did too. Second, Enchantment goes beyond providing examples. It explains tactical methods to enchant people–and thereby achieve success.

Years ago I read a book called If You Want to Write by Brenda Ueland. This book inspired me as a writer. It removed the restraints on how I wrote. I recommend it highly to people who want to achieve their dreams. In fact, if people feel like giving up, Ueland’s book may be more useful than mine. They should certainly read it first.

5. In your Enchantment Hall of Fame you mention Jenny Lawson’s blog The Bloggess as your favorite female blogger, which is probably because you didn’t know the women of 8 Women Dream yet ;-) . . . but she uses the f-bomb quite a bit and loves to swear.

It has been our experience on 8 Women Dream that our readers do not like it when we’ve used swearing (they actually write me to complain). We have even lost interviews with well-known people because of swearing that appeared on our blog. How is it that Jenny’s swearing makes her blog enchanting? Is it important to listen to readers who don’t like swearing?

Jenny’s swearing doesn’t “make her blog enchanting.” If this were the case, every blog would contain swearing. Jenny is enchanting because she expresses the frustration women feel with stupidity, mundanity, and mediocrity. In many situations, only the f-bomb can truly characterize her feelings. The core of Jenny Lawson is something pure and beautiful; her swearing is a mechanism to deal with the bullshit that life sometimes dishes out.

As for your blog, I don’t know if you should swear or not. A lot depends on what your readers want from you. I will tell you this: Don’t let a vocal minority change your true self–or make you “repackage” your true self. For example, five to ten people a day complain about how I tweet. My response is “UFM”–unfollow me if you don’t like how I tweet. No one is forcing you to read my tweets. Being enchanting doesn’t mean you need to be a wimp. It means you are what you are.

6. What is the best way to be enchanting to prospective customers and companies you’d like help from when your project/dream has limited money?

When it comes to enchantment, too much money is much worse than too little. The pillars of enchantment are likability, trustworthiness, and a great cause. None of these are necessarily expensive. It’s when you have too much money that the bull shiitake starts to take over.

7. I don’t remember if this is in the book, but what state in the US is the most enchanting?

I haven’t been to every state yet, so I don’t have complete data. I grew up in Hawaii, so I know it’s very enchanting. It just needs more ice rinks. If you pressed me for a decision, I’d probably say Oregon. But if I decided to move outside the United States (say, for example, because Sarah Palin became president), I would move to Vancouver, British Columbia. I am a Canadian stuck in a Hawaiian body.

Are you kidding me? When I was eight, I wanted to get a bb gun and shoot things, build dams in the ditch in front of my house, and eat guava ice cakes every day. This still sounds pretty good.

I agree. It all sounds pretty good.

I want to thank Guy Kawasaki for being so charming and allowing us to be a part of the launch of his latest book.

For more on Enchantment see:

« Dream Tokens for My Memoir: They’re All Around me
Spring Training for Your Dream »