You Are Here Home » BRAVE LIVING » Thankful Thursday: You are the Master of Your Fate 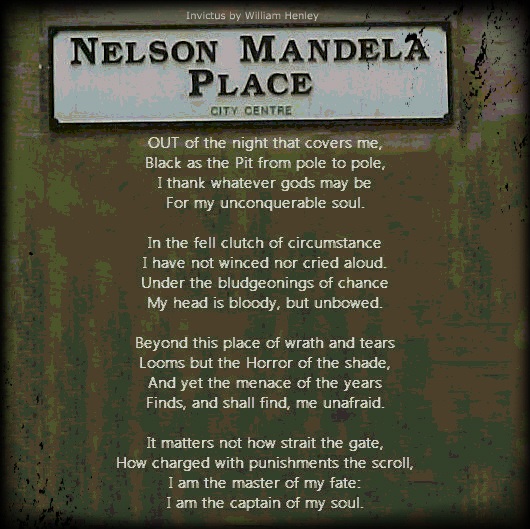 I am certain there’s not a place in the world that hasn’t heard of South African Leader, Nelson Mandela “Madiba’s” passing. He was an inspiration to my country and his speeches called on people to be more and do more.

His ideal of a democratic and free society was one where all people would live together in harmony and with equal opportunities. He worked tirelessly to make this a reality for his country.

Madiba was inspired by the poem, “Invictus” (Unconquered, Undefeated) by William Henley. He kept the poem with him during the years he was kept locked in a prison cell on Robben Island. It was written on a tiny piece of paper.

OUT of the night that covers me,
Black as the Pit from pole to pole,

I thank whatever gods may be
For my unconquerable soul.

In the fell clutch of circumstance
I have not winced nor cried aloud.

Under the bludgeonings of chance
My head is bloody, but unbowed.

Beyond this place of wrath and tears
Looms but the Horror of the shade,

And yet the menace of the years
Finds, and shall find, me unafraid.

It matters not how strait the gate,
How charged with punishments the scroll,

I am the master of my fate:
I am the captain of my soul.

When I think of being a motivational speaker and and inspiration to women in my country and beyond, I think of Madiba and the example he set. I am grateful to have known of someone who could rise up to greatness against so much without letting hatred and fear become a part of who they are.

To him, it was about giving to others, to leading the way, but expecting everyone to do their part in making a difference.

Madiba said that, “what counts in life is not the mere fact that we have lived. It is what difference we have made to the lives of others that will determine the significance of the life we lead.”

Making a difference is what called me to be a voice for women and encourage them to not let anything stop them from becoming who they are meant to be. They are the masters of their fate, the captains to their futures.  It’s important that they see this about themselves.

On this thankful Thursday, I am grateful for the opportunities Madiba shaped for the women of this country.  I want to share a speech he gave in 2003 to the Women in Action for Development —

Thank you for inviting me to speak here tonight and for providing this opportunity to participate in the celebrations of Women’s Month. We should be celebrating women and their central role in society all year through, day in and day out; but I am proud to add my voice to those recognizing and celebrating women in this special month.

May I in the first place extend my congratulations to “Women in Action for Development” for organizing this occasion. As you said in your letter of invitation: even though we recognize the many and grave challenges women continue to face, there is reason to celebrate the achievements of women. This, as I understand, is such an evening of celebration.

One of the spectacular achievements of democratic South Africa is the extent to which issues of gender and the role of women had assumed prominence in the public conversation. Too much of this is still only on the rhetorical level, but the fact that few people in our society can claim ideological ignorance or innocence in this matter, is largely due to the consistent and persistent pressure of women.

Today we speak of the ideals of South African society as being non-sexist as much as non-racial. We should not underestimate the fundamental significance of that change in our societal idiom. No longer are we allowed to put the national question above gender issues; in fact, we are no longer allowed to think of the national question as something apart from the role and place of women in society.

As I have said: much still needs to be done to fully realize the noble ideals of gender equality contained in our Constitution and in our pronouncements. However, we can celebrate the firm foundations that have been laid. And these have come about not through the favors and generosity of men; but through the struggles and pressures women have brought to bear on our thinking and ways of doing. For that we salute you, because through that you not only improved the lot of women but you helped to liberate all of us. You have helped to make our society, at least in its rhetoric and stated intentions, a more progressive and caring one.

It is now for all of us to redouble our efforts and our commitment to collectively ensure broad-based gender sensitivity and real life practices of gender equality.

Too many women continue to bear the brunt of social and economic deprivation, in the rural as well as urban areas. Domestic violence, rape, abuse of women remain disgraceful blots on the reputation of a country that is called a miracle nation in other respects. The suffering of children invariably impacts more greatly on women than on men.

You, the women of our nation, have been an inspiration to us, showing us the way towards a more humane and caring society. We owe it to you – and to our collective selves – to build a society where women genuinely share equally in the social, economic and cultural fruits of society. (Source: nelsonmandela.org)

Remember that you are the master of your fate.  Are you grateful for the challenge that living your life on purpose calls you to be?