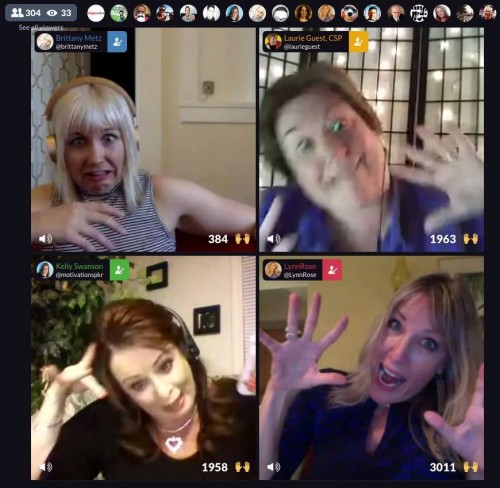 Come join us at The Virtual Laugh Bar – where the comedy is served up clean and neat – shaken not stirred – and nobody has to drink alone. Sundays 7pm EST on Blab.

A New Dream Has Arrived- My Own Virtual Laugh Bar – Where the humor is served up clean and neat – shaken not stirred – and nobody has to drink alone.

Two months ago, I had never heard of Blab (www.blab.im). Shoot, two months ago nobody had heard of Blab. It’s this rocking super cool online platform that lets you hold four online video conversations at once – while your viewers get to mix and mingle on the side and have their own fun additions to the conversation – while you can swap people in and out of the video as often as you wish.  Highly interactive. Highly fun. Highly cool. And catching on like wildfire.

I was part of a blab conversation with my dear friend and fellow speaker Laurie Guest (www.solutionsarebrewing.com).  Laurie is VERY funny. And when you put the two of us together. Well, it just gets funnier. People throughout the blab were commenting about how funny we were and how they loved listening to us. As soon as the blab ended, I had an idea.

“Let’s do a show together!” I told Laurie. “Just you and me. Bantering and dishing about life. No business advice. No motivation. Just hanging out and laughing together. You and me and some random guests.”  She instantly agreed.  So while it sounded scary and over-the-top (we were committing out of the gate to host a show every week) it just felt right.  We didn’t go seeking advice or asking others what they thought. We just jumped.  I figured I had nothing to lose and whole LOT to gain by jumping into this Blab thing early.

Yes, I had the doubts and the fears that went something like this:

And I came to the conclusion that I often come to when faced with a new dream – if it doesn’t cost me a lot of money and doesn’t tank my career or hurt my brand – why not?  So we jumped.

We scheduled our first show for SIX DAYS LATER!  Gulp. Nothing like acting fast!  But we knew we had to act fast. Sometimes you have to move without waiting to figure it all out.  We came up with a cool name: The Virtual Laugh Bar.  And we came up with some cool ideas on how to brand and host the show.

Then I went an made a demo video to tell people about it. Here is the demo:

Then I created a YouTube Channel where we could post all the replays of the episodes for those who can’t watch it live on Blab – https://www.youtube.com/channel/UCMCung5SKgpSFQvIyMdkuLQ

Then I created a Facebook Fan Page where we can have conversations about the show: https://www.facebook.com/pages/The-Virtual-Laugh-Bar-with-Kelly-Swanson-and-Laurie-Guest/1648099662099793

Then I started telling all my followers (on LinkedIn, Facebook, Google Plus, and Twitter) about it.  People started to subscribe to the show. It was pretty exciting. And still very scary.

Laurie and I did a lot of planning for this show. It was all new to us, and Blab was still in the Beta Testing phase, so all the kinks had not been ironed out yet. So we did what we could to plan, figured out back up options if things went wrong, and discussed our roles for the show.

I was VERY nervous. This was a new platform for me. Totally off script. Gulp.

And we did it.

Here is the video of our pilot show. As you can tell, we had some technical issues. Everything did not go according to plan, even though we didn’t have a plan. But we had over 400 viewers – as of the writing of this post – the replays are available forever.  When you get some time to settle in and watch, I would appreciate it. I think it’s pretty funny. Not bad for the first episode. And now I know how to make it even BETTER.  I’m so excited about this new dream. It was something I didn’t see coming. And aren’t those the best kind!

« Finding Happiness Through Being Who You Are
Living the Writer’s Dream Life: A 1st Date in 35-Years »