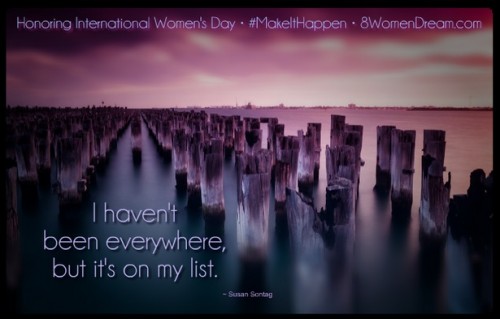 Part of my traveling dream allows me to visit many locations that honor the sacrifices of others.  They are typically solemn places of reflection.  In honor of International Women’s Day I am showcasing 8 memorials dedicated to women that you should add to your dream travel bucket list.

In 1909, the United States observed the first National Woman’s Day was observed in the United States. The Socialist Party of America designated this day in honor of the 1908 garment workers’ strike in New York, where women protested against working conditions.

Now International Women’s Day is celebrated every March 8 in many countries around the world. It is a day when women are recognized for their achievements without regard to divisions, whether national, ethnic, linguistic, cultural, economic or political. It is an occasion for looking back on past struggles and accomplishments, and more importantly, for looking ahead to the untapped potential and opportunities that await future generations of women. (source: UN)

In Honor of International Women’s Day, here are 8 Women Memorials in#PaintItPurple to visit:

1. The Vietnam Women’s Memorial in the U.S. 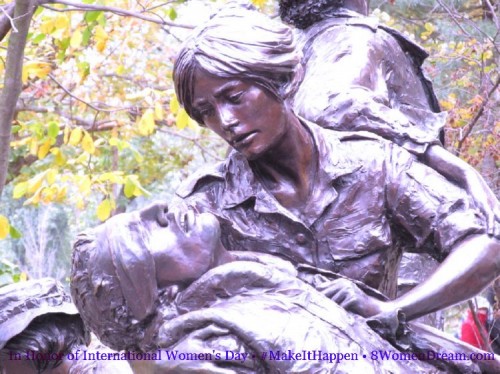 The Vietnam Women’s Memorial honors the 265,000 women who risked their lives to care for this country’s wounded and dying during the Vietnam War. The 2,000 pound bronze structure stands 15 feet tall and is located at the west end of the National Mall, directly across from the Vietnam Veterans Memorial. Three symbolic women of service and one injured soldier are depicted in the memorial, standing atop a mound of sandbags. One woman looks up as one prays and the other cares for the wounded man. According to the National Park Service, about 2.4 million people visit the memorial per year. (source: washington.org)

2. The Zalongo Monument in Greece. 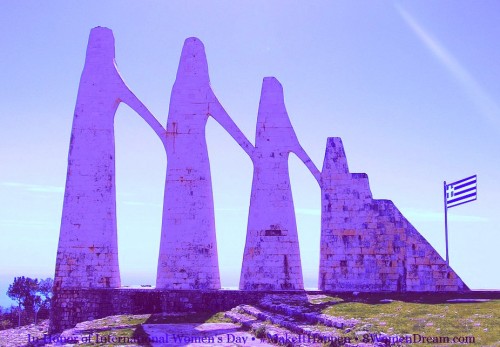 During the Souliote War in December 1803, the Souliotes began evacuating Souli after their defeat by the forces of the local Ottoman-Albanian ruler, Ali Pasha. During the evacuation, a small group of Souliot women and their children were trapped by Ali’s troops in the mountains of Zalongo in Epirus. In order to avoid capture and enslavement, the women threw their children first and then themselves off a steep cliff, committing suicide. According to the legend, they jumped down the precipice one after the other while singing and dancing. The incident soon became known across Europe. At the Paris Salon of 1827, the French artist Ary Scheffer exhibited two Romantic paintings, one of which was entitled Les Femme souliotes (“The Souliot Women”).Today, the Zalongo Monument on Mount Zalongo in Kassope commemorates their sacrifice. (source: Wikipedia)

3. Monument to the Unknown Woman Worker in Ireland. 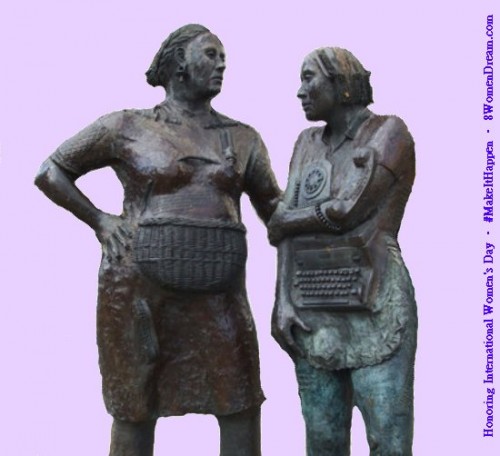 The Monument to the Unknown Woman Worker is a 1992 sculpture by Louise Walsh in Belfast, Northern Ireland. The sculpture is located on the city’s Great Victoria Street adjacent to the Europa Hotel. The Department of the Environment’s original commission was to reflect the nearby Amelia Street’s history as a Red-light district. However Walsh disagreed with this, and changed the focus to women’s rights issues of low-paid jobs and unpaid housework. (source: Wikipedia) 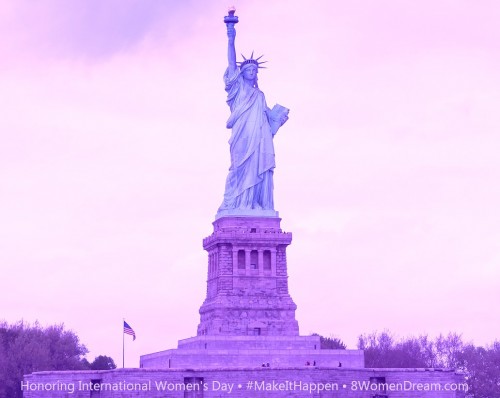 The Statue of Liberty (Liberty Enlightening the World) is a colossal neoclassical sculpture on Liberty Island in New York Harbor in New York City, in the United States. The statue is of a robed female figure representing Libertas, the Roman goddess, who bears a torch and a tabula ansata (a tablet evoking the law) upon which is inscribed the date of the American Declaration of Independence, July 4, 1776. (source: Wikipedia) 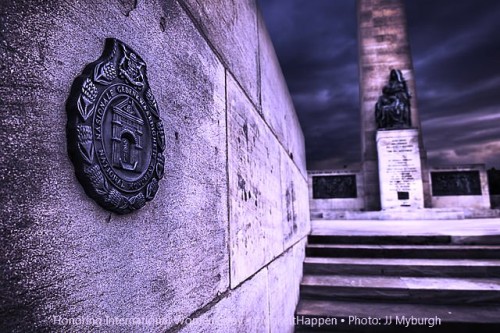 The Women’s Monument or Vrouemonument in Bloemfontein, South Africa, is a monument commemorating the suffering of some 27,000 Boer women and children who died in British concentration camps during the Second Boer War. The Monument is a Provincial Heritage Site in the Free State. The monument was designed by a Pretoria architect, Frans Soff, and the sculpting by Anton van Wouw. A central bronze group, sketched by Emily Hobhouse and depicting her own experience of 15 May 1901, is of two sorrowing women and a dying child in the Springfontein camp. Emily Hobhouse’s ashes were ensconced at the foot of the monument. Beside the monument are the graves of Christiaan de Wet, Rev. J.D. Kestell, President of the Orange Free State Martinus Steyn, and his wife. (source: Wikipedia)

6. The Rosenstrasse Monument – The Block of Women in Germany. 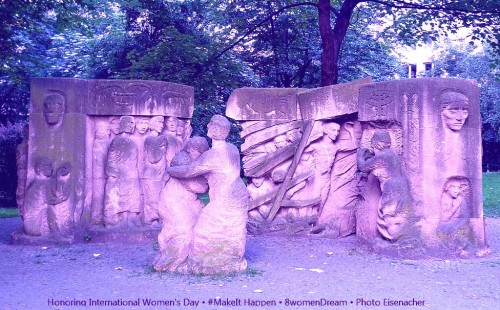 The monument is entitled “Block der Frauen”, dedicated in 1995 and carved by sculptor Ingeborg Hunzinger. The Nazis exempted Berlin Jews in mixed marriages from deportation until February 28, 1943. On that day, the Fabrik-Aktion took place, where between 1,500 and 2,500 Jewish men were rounded up and held in the Jewish community building on Rosenstrasse. The next day, a series of demonstration by non-Jewish wives and relatives took place at the site and continued for five days. Strangely, the men were released. The imagery is of protesting and mourning women. The inscription on the rear reads: “The strength of civil disobedience, the vigor of love overcomes the violence of dictatorship; Give us our men back; Women were standing here, defeating death; Jewish men were free.” (source: chgs.umn.edu) 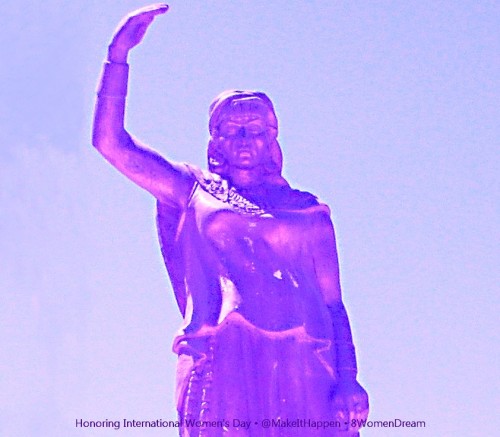 Dihya was a Berber queen, religious and military leader who led indigenous resistance to Arab expansion in Northwest Africa, the region then known as Numidia, known as Algeria today. Around the year 690, she took personal command of the African armies. Dahia al-Kahina eventually took her own life rather than accept defeat at the hands of the Arabs. (source: runokorashidi.com)

8. Monument of The Blessed Virgin Mary in Bulgaria. 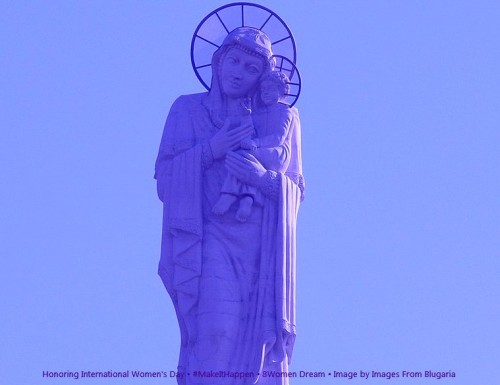 Weighing in at 80 tons, the world`s largest statue of the Virgin Mary with Jesus measures 14 m (64 ft) high and stands on a base of 17 m (55 ft 9 in) and is featured in the Guinness Book of Records. The monument is built to honor and pay respects to the Holy Mother of God the Protectress of the town of Haskovo, Bulgaria. The Blessed Virgin Mary monument built on its foundation in 2004. (source: Visit Bulgaria)

What’s striking is how difficult it is to find memorials to women and how many countries don’t have memorials to women at all. There are several more that should be mentioned here besides these 8, like the Sacagawea Monument and Nefertari Merytmut’s tomb to name a few.

What women memorials would you like to see erected in our honor?

« Is It Really About Being the Better Public Speaker?
8 Funny Quotes to Make You Laugh at Your Big Dream »