Why Believing in Santa is Good For Your Dreams

Growing up Muslim in America, my siblings and I were told there was no Santa Claus, but we were also told not to ruin it for other children.

So with a sense of watching a fantasy movie, I would feel jealous of my friends who eagerly awaited Santa’s visit. What was it like to have faith in someone who knew your good deeds and bad and still brought you your heart’s desire?

When my ex-hubby and I talked of children, believing in Santa was something important to us both.

Last year, when I took my son, the Bub, out for a day just for us, we went to a mall (I detest malls especially during the holidays) and he was able to see Santa Claus. He didn’t mind standing in line. He didn’t mind the hustle and bustle around us. He waved and yelled “Hi Santa!” many times. And bless his heart, Santa waved back between children.

When the moment finally came for him to sit with Santa, the Bub was quiet and thoughtful.

Santa asked him if he’d been a good boy. The Bub answered with an affirmative. Then Santa asked if there was something special he could bring for Christmas. The Bub said plainly, “A black train, like in the Polar Express.” My heart sank a little. He’d been asking for this since LAST year but he isn’t even four yet. The only Polar Express trains are model trains and I was sure they were too advanced for him.

I also doubted I could find one at the last minute.

We came home and the Bub kept talking about how he got to see Santa. I never sat with Santa, took pictures or told him my heart’s desire.  I’m experiencing the faith and magic of that through the Bub. Here is this boy who dreams of a magical train. He has never experienced Santa before so he has absolutely nothing to go on except a dream and belief in magic.

How many of us would achieve our dreams if we had the utmost faith that it would happen?

What if just by believing in something we MAKE it happen? If you KNEW without a doubt your dream would come true would you behave differently as you followed it? Would you be confident enough to endure the bumps to see where it takes you?

Later when my sister and I went Christmas shopping, I mentioned offhandedly that I knew what my son wanted for Christmas, but there was no way I would be able to find it. She disagreed. She said to try Hobby Lobby to see what age ranges each set had.

Then I checked Amazon and saw a Polar Express Train with a wider track. One that actually said it could work for a younger child with a parent’s help. I called Toys ‘R Us and waited on hold for 15 minutes to hear that they haven’t had any Polar Express Trains for some time.

I considered ordering it from Amazon but wasn’t sure it would arrive before Christmas. It was also going to be the year that my ex-hubby and his family had the Bub for Christmas. I wanted to do a mini-Santa drop off of this present and see the belief in magic in his eyes.

My sister (she’s a smart cookie!) implored me to stop at Barnes and Noble since they sell the book and other holiday gifts. And lo and behold, they had the exact set I was looking for! 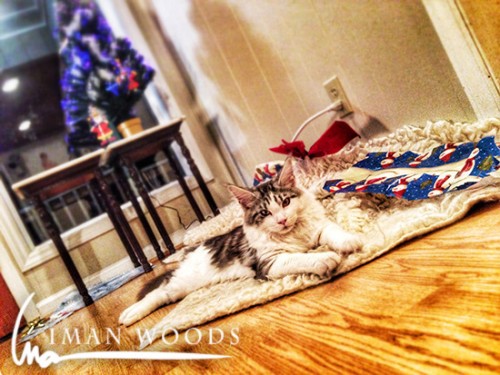 The spoils. Odin (a five month old Maine Coon) has had fun playing in the wrapping paper.

I spent the rest of the day wrapping presents and hanging decorations to make it look like Santa had stopped by while the Bub was at school. When he walked in the door he started screaming, “Santa? Santa are you here?” His blind faith is a beautiful miracle. I think faith is so tied to trust and as we age and are hurt, we learn to trust less and less.

My whole focus was to make sure that Santa brought him what he asked for. Because the belief in something magical should be nurtured. Even as adults we have to nurture that flame. Sometimes we have to trust even when all other evidence points to disappointment.

I didn’t take any photos when the Bub unwrapped his gifts. As a professional photographer, I often find that when I’m behind the camera looking through a viewfinder, I miss LIFE. I’m so focused on my job, I don’t remember most situations except through the images I capture. I made a point of not using my camera because I wanted to be present in that moment with him.

And although that day started at 5:00 a.m.,  because I ran around like a chicken-with-my-head-cut-off, and my house was an utter disaster: I look back on it now and I think, “It was worth it.”

Isn’t dreaming in and of itself worth it?