In my dream journey to improve women’s self-esteem worldwide, I photograph women daily who wish their bodies and features were different.

But what if we’re focusing on things that men don’t even notice? Could we improve women’s self-esteem if we knew our partners adored every last “flaw” we perceived?

Women are critical. Most of us grow up earning PHDs in diffusing compliments and obsessing about flaws. When we brush aside compliments from the men that love us, we’re denying ourselves an instance of embracing who we are. The only way to improve women’s self-esteem is with self-love and changing perspective. Changing our bodies isn’t as effective as changing our minds.

To prove my point, I asked my good friend Melissa and her loving honey Richard to participate in an experiment to illustrate how we worry about things men don’t. I had her choose five photos, two that she didn’t like and three that she did. I had her describe each photo and then sent the same five to Richard and asked his point of view. I was a bit sneaky… After Melissa sent her thoughts about her photos, I sent her comments to him and asked him to validate or refute her points. 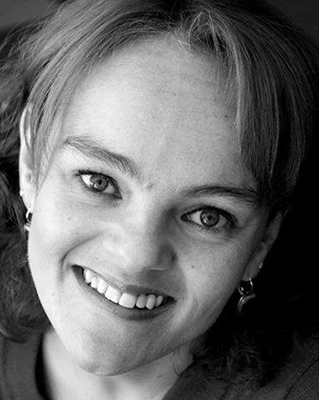 Melissa: I like this one because it just looks like me. I’m smiling and happy. Plus, I like what’s “behind” the picture. This was the day after Richard and I split up. I was so incredibly sad and confused and hurt, and yet it’s all hiding behind my smile. Because that’s what I do. I keep going.
Richard: I see a beautiful woman who is sad but is trying to push through it. Her eyes just look a little sad. I know this was taken while we were broken up so maybe that is coloring my opinion. This is one of my favorites, btw. (aside from her not being happy–I always want her to be happy) 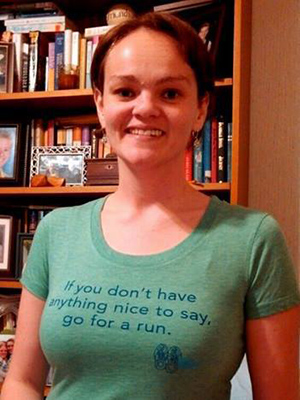 Melissa: Ok, and here’s one I don’t like. The reason I don’t like it is pretty shallow. I hate how big my boobs are. The only reason I took the pic was to show off the shirt, but I think the shirt is too tight on me. Plus, I hate my hair pulled back.
Richard: Again I see a beautiful woman. She looks happy in this one. She probably didn’t like this one because it shows off her boobs. That’s one of the reasons I like it! (like I said, we’re simple creatures!). In my last relationship, my girlfriend was short and petite. She always wished she was tall and, as soon as she got the money, she was getting a boob job. Melissa wishes she was short and had smaller boobs. Whatever you chicks have going for you, you seem to want the other. Go figure! (Melissa & I have talked about this quite a bit, so it’s no big secret.) 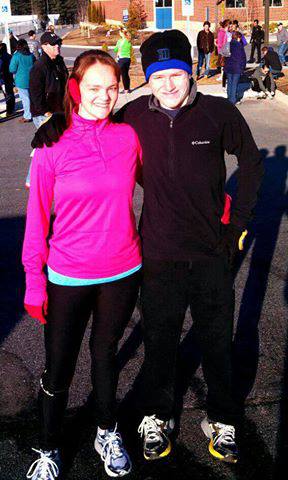 Melissa: Ok, here’s another one I like. I like it because I think I look youthful and slim. I also like it because it’s a running picture, and running makes me happy. (Especially running with people I love!)
Richard: I like this one. She’s happy when she’s running and she and Jeffrey are arm in arm. what’s not to like?

Melissa: Here’s another I don’t like. I think my face looks chubby and shiny and my eyes are asymmetrical. Plus, I remember feeling strange taking a picture of myself (well, having Kelly do it anyway) to post on Facebook. It was to show my new darker hair (which I did like the color – but not the style).
Richard: I like this one too. Big smile. Eyes are happy. She probably didn’t like this one because she hadn’t straightned her hair or whatever. Big deal, who cares! She looks real–she doesn’t have on a ton of makeup, the coloring of the photo hasn’t been doctored, she just looks like Melissa. Love it! 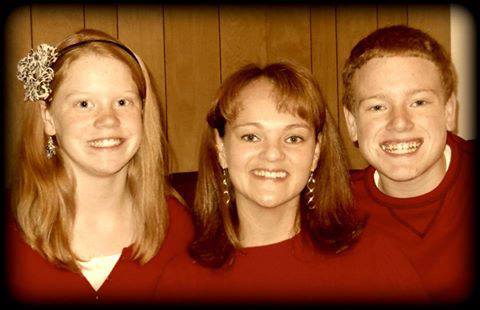 Melissa: One that I do like. I’ve always liked this one because I look happy and I like how my hair looks. Plus I like it because it’s with my kids, of course.
Richard: I love this one! She looks so happy in this one! She and Kelly and Jeff all look happy here. Good stuff!

I believe that to change self-esteem in women we have to shift our perspectives. I asked Melissa to critique and share the specific things that might affect her self-esteem. I wanted both good and bad. And I was sneaky again, I sent her responses to Richard to agree with or dispute.

Melissa: Good stuff: I like my eyes and my smile.
Richard: I like her eyes and her smile too.

Melissa: I think I look generally happy.
Richard: I think she looks happy now too, which I love!

Melissa: I like my cheekbones and my collar bone. (I know – that’s weird – but I like that they’re more defined now that I’m a little slimmer).
Richard: I’ve never really paid attention to her cheekbones. And I can honestly say that I have never, ever, noticed her collar bone. Do you have a collar bone? Is it performing the function intended? OK then!

Melissa: I like my legs.
Richard: Her legs are hot!

Melissa: I like my hair color right now (it’s a little darker than its natural color and I think that looks good with my coloring).
Richard: I think her hair looks great. The color is really not important to me. If she digs it, then great!

Melissa: I kind of like my skin tone.  I tan easily.
Richard: I’ll go with her on the skin tone too.

Melissa: I don’t like the wrinkles around my eyes.
Richard: Wrinkles? I’ve honestly never noticed.

Melissa: My hair is a mess!
Richard: Her hair looks great. She would look great without any hair.

Melissa: I think my face is asymmetrical (one eye is a little smaller than the other and they’re not even).
Richard: Asymmetrical face? Good grief.

Melissa: My smile is a little crooked.  (I know I said I like my smile – but I meant that I like that it’s there.  I just wish it was straight! lol).
Richard: Crooked smile? It’s perfect!

Melissa: I hate my back.  Don’t know why – I just do.  It’s chubby.
Richard: She hates her back? Good grief.

When I look at Melissa, first and foremost I see a beautiful woman. One who has experienced more of what life has to offer at an earlier age than most, but that wisdom makes her even more beautiful. (She is but a wee child after all!) When I look in her eyes, I know beyond all doubt that she loves me with all her heart. She has a beautiful smile and loves to laugh. What more could a guy want?

I think the biggest mistake women make is focusing too much on all the little details (“my nose is too big/small/crooked/etc). In my experience, most people (ALL dudes) pay more attention to “the big picture” and not each individual detail. Nobody cares if your chin is wide or pointy. Nobody cares. Most people don’t care if a woman’s nose is long/short/fat/thin/etc. I think this is the biggest mistake women make, not only in comparing themselves to others, but in imagining how dudes view them. We are simple creatures. Show up naked & bring beer and you’re golden! I’ve always said that women dress to impress other women more than men. Women are always scrutinizing other women’s fashion, shoes, noses, boobs, whatever. Meanwhile, us men are still wearing the same clothes/shoes/hairstyles we had in high school!

You chicks put waaay too much focus on minor details that the rest of the world doesn’t even pay attention to. Go back and watch that Dove Beauty Sketches video again. That sums it up.