You Are Here Home » BUILD SELF-CONFIDENCE » How to Photograph Men

How to Photograph Men: There have been many workshops and guides written that address poses for women, but what about learning how to photograph men? Today I’m sharing some of my favorite photos I’ve taken of men and the techniques used to achieve these results.

Learning how to photograph men is a unique challenge when you empower women daily.

Women want to look curvy but thin, glamorous and laughing like they know the secret to happiness.

(Spoiler alert: laughter keeps you young and happy and always photographs well. We laugh a ton in my studio.) So I was afraid of photographing men for a long time. After building the reputation for high end pinup art, I was terrified that I wouldn’t be able to do men the same justice.

“We fear things in proportion to our ignorance of them.”
Christian Nestell Bovee

To tackle my fear, I started working with men. On purpose. For this girly girl it was a challenge.

I knew my method of how to photograph men would reveal itself as I actually worked with them. You will have your own method, your own style as you work with a new genre.

Men are a very different kind of subject. I tend to work with men the way I work with families. I’ll set up certain parameters of light and location and then let them interact.

Women take posing advice from head to toe, the more I guide a pose the more confident they photograph. It’s exactly the opposite for men.

The more I pose men the less comfortable they look. So I go for a low key energy on set. Asking them to do things like turn to the camera, look here or away.

The biggest way to connect with your subject, and it’s especially good when learning how to photograph men, is to be genuinely interested in them. Be sensitive if you think they’re nervous and show empathy that this might be somewhat painful for them. I often tease that it will be over before they know it and that I’m not a dentist. I assure them this will be painless. No offense to any dentists out there, that usually gets a chuckle.

The following photograph is of my favorite teacher, Mr. Wertz. I think he’s one of the most interesting men in the world.

He was my history professor from high school in Germany. He was also my soccer coach and our student council advisor when I was Secretary and Vice-President. (It was a small school.) He gave extra credit for being able to name which band wrote Lucy In The Sky With Diamonds. And unofficial extra credit if you caught the LSD reference.

When I visited North Carolina he took me to feed the seagulls. It was a teensy bit terrifying (okay, quite scary) at first. I was teased for referencing Alfred Hitchcock’s The Birds. But after photographing seagulls they have endeared themselves to me as germ-carrying cutie pies. It’s pretty incredible how they flock to bread and will snatch it out of the air (or your fingers!). 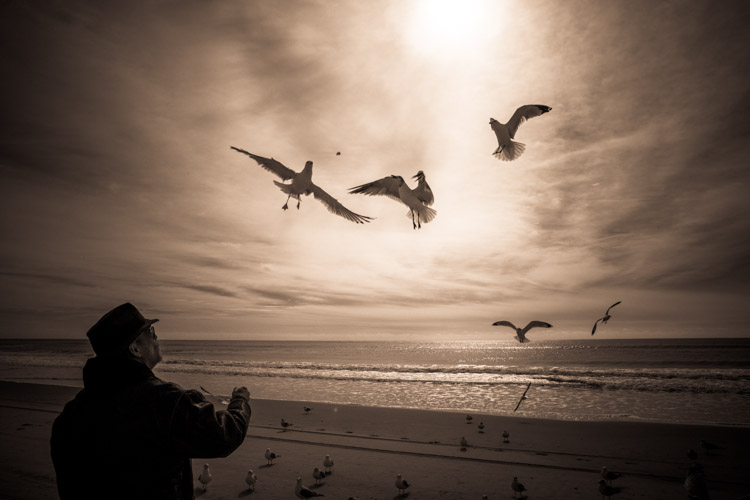 How To Photograph Men: This is my favorite teacher from high school showing me how the seagulls on the North Carolina coast will snatch bread out of the air. Shot with Canon 1DS Mark ii. Natural light. Processed entirely in Lightroom.

Mr. Wertz came to visit me in Colorado and I was dead set on photographing him with one of his famous fedoras. Honestly, he was not keen on being photographed. I had about five minutes. Three of those precious five minutes I was putting a beauty dish on my main light. All of that being said, this shot is one of my favorite photographs that I’ve ever taken. He’s laughing at my son. I think it captures his sense of humor and the twinkle he gets in his eye when he smiles. 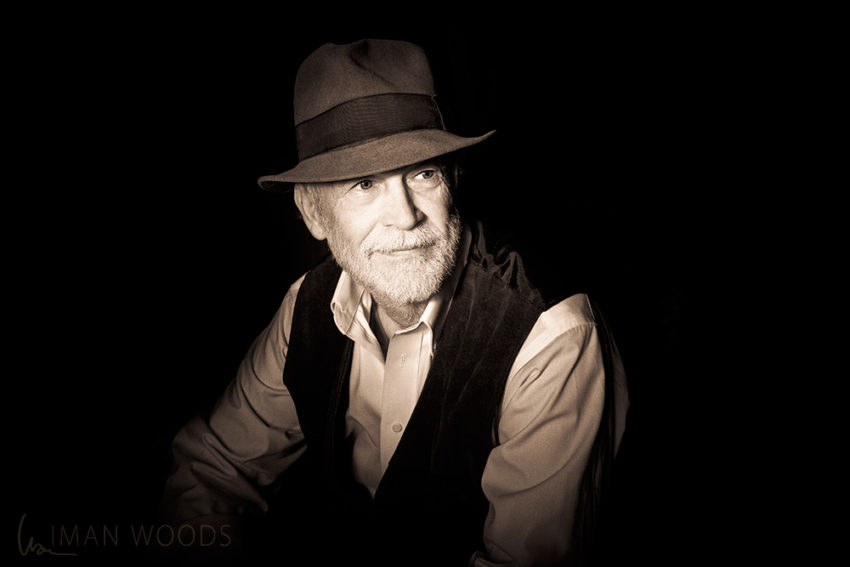 This was shot with one light, a Paul C Buff beauty dish pointed at his head and shoulders from behind and left of the camera. I wanted the fall-off of light to render the background almost black so I used a grid. Post-processed in Lightroom with the Civil War preset and minor edits in Photoshop to darken the frame.

The fact that he (and his lovely wife of 42 years) loves this photograph makes me feel great.

When asked how he felt about the photos he chuckled, “You’re very good at what you do. I look like the most interesting man in the world.” Mission accomplished!

The next photo is my first foray into Dudoir (Dude Boudoir) Photography. This is Seth and as you can see, he is awesome. You can’t go wrong when a man is unapologetically confident. (Eat your heart out, George Costanza.) Shot with Canon 1DS Mark ii, a Speedlite 580ex bounced off the ceiling, and edited in Lightroom. Then finished in Photoshop using Jessica Drossin grunge textures. 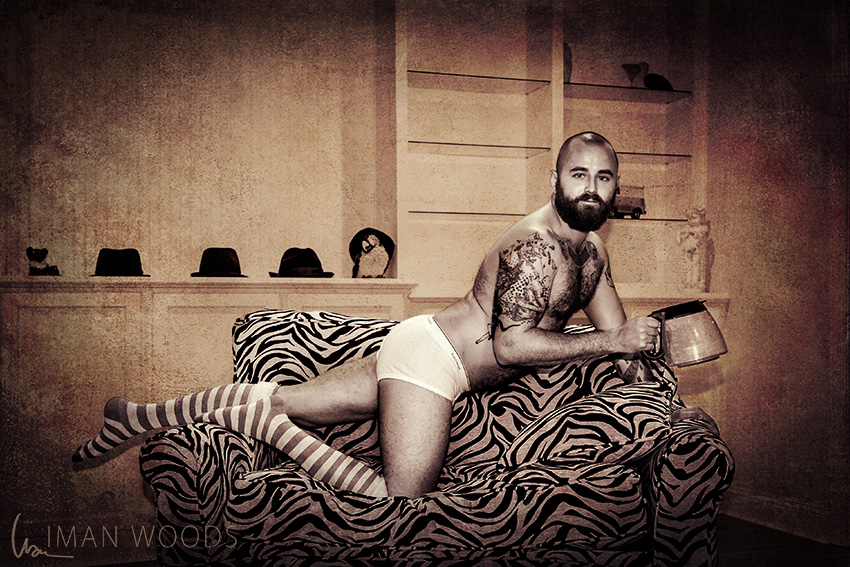 This is my friend from high school, Curran (and Mr. Wertz’ son) joking around with Seth. They posed this all on their own. I just had to bounce the light (similar setup and processing as Seth’s Dudoir photograph) and capture their antics. 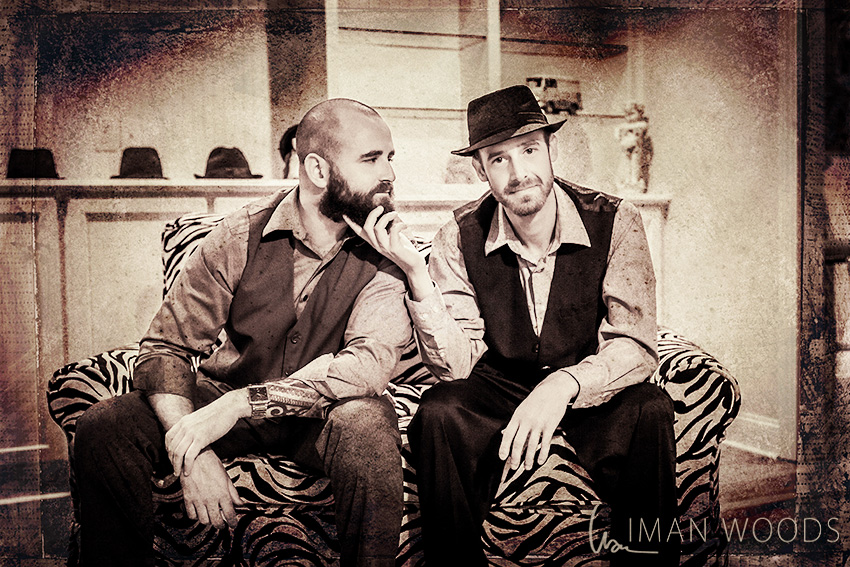 How To Photograph Men – Bring a Friend

All of these guys are easy on the eyes and easy to photograph. I’m going to have to expand my website to include a genre of the men I get to work with. This last one… I have no explanation or description for. Be baffled with me. It makes me laugh, so I love it. Seth is funny. 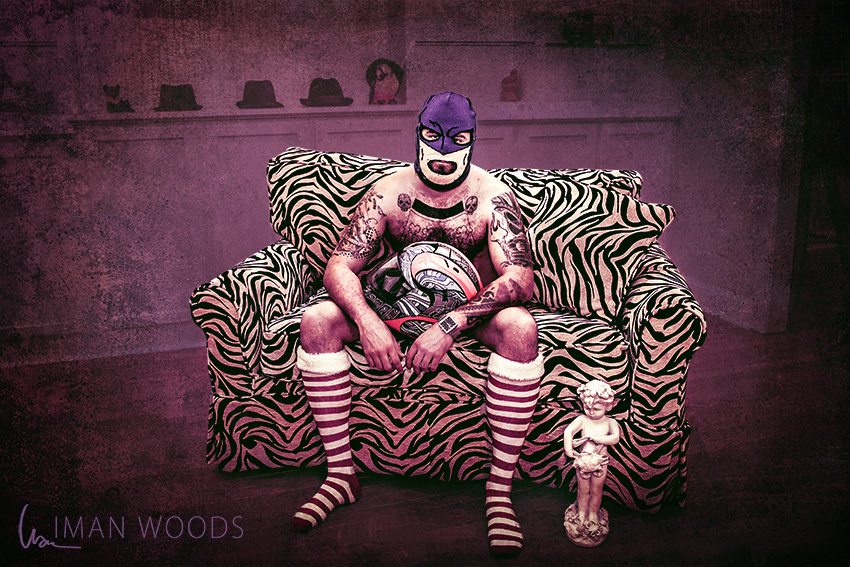 Tips for how to photograph men: