You Are Here Home » BUILD SELF-CONFIDENCE » An Apology To Women

To the women who were raised to believe men hold all the power.

To the women who were raised to think that the female form is a living breathing temptation that we must temper all of our days.

To the women who think it’s somehow OUR inherent female responsibility to make sure men don’t stray.

To the women who blame themselves when they are assaulted.

To the women who blame themselves when their men cheat.

This is my apology to women everywhere.

I am deeply sorry.

I debated whether I should even read it or delete it outright.

Normally I don’t read or respond to nonsensical negativity. But this time I figured I better decide whether it was a conversation that needed to happen. 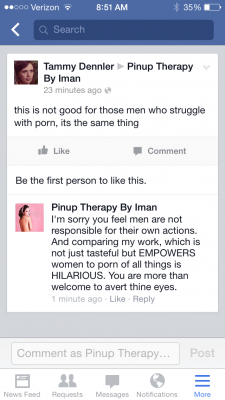 Let me introduce you to some of the women who have rocked their inner pinup.

Throughout this blog you’ll see images of a few of the amazing women I’ve worked with. The captions are their own words about how their pinup art makes them feel. 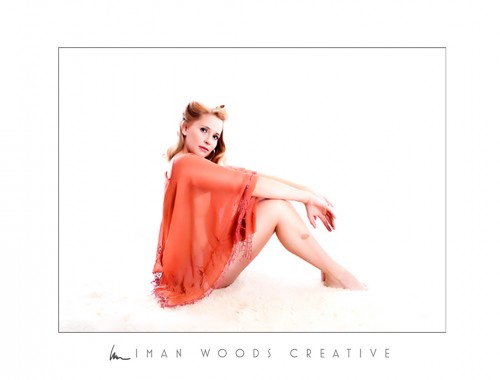 Jenna: Pinup is expression. The right to be and feel like a woman: curves, creases and folds included. To see the body you look at every day in a new light. To be reborn as something you can again see beautiful. Pornography comes from the Greek word pornographos which were writings about prostitution. Pinups are not prostitutes. They are liberated women.

And I don’t let anyone say anything bad about the incredible, beautiful, diverse women I’ve worked with.

After reading the not-so-nice comment, I knew I had to speak up.

High schools are photo-shopping shirts onto tank top cladded girls in the YEARBOOK. (Because tank tops are the gateway to teen pregnancy! ) Yet the same school celebrated the boys as STUDS. (Studs are A-OK though.) Women are criticizing essentially every other woman on Facebook for tempting their husbands. (This is my favorite response to that silliness. Humor is Queen.) Mothers of sons are shaming teen girls for having sexy bodies and (gasp!) learning to feel sexy in their bodies.

I’m sorry if you believe that men aren’t responsible for their own actions.

I grew up in a culture where women were taught to hide all beauty and save it for her husband. I grew up Muslim.

I remember leaving the mosque and accidentally making eye contact with a man in the parking lot. I would get an unwelcome stare until I felt ashamed enough to stare at the pavement.

So I can feel your pain to a degree. 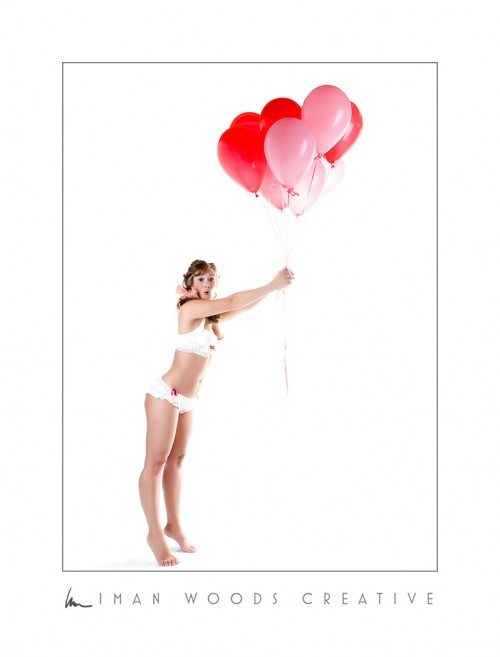 Logan: I decided to do pin up art with Iman, because I felt her work of art was tasteful and timeless, and something I would have no shame in sharing with my grandchildren one day. I’m glad I have these pictures to honor myself in such an elegant manner.

But I’m a seeker. I grew as a person and grew as a woman. I learned that my body is a gift. From God. TO ME.

Throughout the years I’ve watched women struggle with their beauty. I’ve watched their sexuality become a burden. Those who were raped and assaulted blamed themselves. They went over and over ways they could have tried to prevent it.

It doesn’t matter what we’re wearing. An empowered woman is a confident woman and watching that confidence unfold over and over again has changed me forever.

I believe if more women had this confidence, we could change the world. 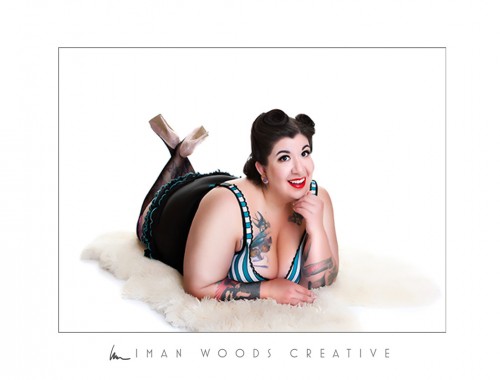 Desiree: Prior to my shoot with Iman I always just thought people were being nice when they said I was beautiful because I don’t fit America’s standard of beauty, my photos helped me see what everyone else does. Pinup is such a beautiful and innocent art form that I think every woman, no matter what their size, should partake in even if it’s just for herself.

I know there will be readers who know a specific woman who has hurt them or tried to go after their man. I can’t defend every woman. But I do believe that we should assume that MOST women would never seek to make a married man stray.

Let me tell you a little bit about my work. I started this when I was 100 pounds heavier.

I didn’t feel beautiful and throughout the years of helping other women find their beauty, I was blessed to find my own.

So saying, “Been there, done that!” while flaunting my tank top doesn’t begin to describe how much I identify with women everywhere. 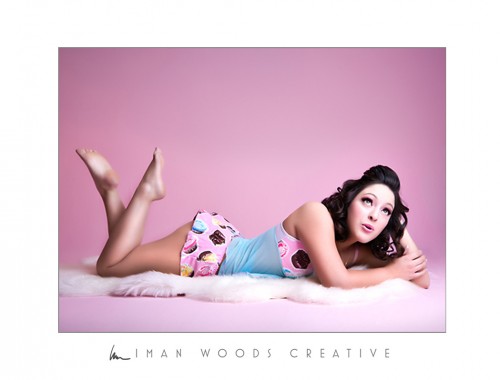 Danielle: Doing pin-up photos with Iman changed my life. I was reminded that my body was amazing. I was worried about baby weight, stretch marks, and everything else as I took photos with her and yet when I saw the finished photos, I realized that my body was that much more impressive to me for what it had accomplished. I learned to love myself again thanks to her.

I do all types of photography, but I work primarily with women. Many of my clients struggle with finding themselves beautiful.

This affects every aspect of their lives.

Seeing them cry because they are seeing themselves in a positive light for the first time breaks and simultaneously heals my heart.

Knowing that she will be a better mother, a better wife, a better friend because she values herself is the reason why I’m called to this profession. A profession started from scratch for the sole purpose of hoping to celebrate the divine beauty of being female.

I’m sorry if you’re struggling in your marriage. I know how heart rending that is. But if pornography addiction is like other addictions it’s the addict’s job to deal with it.

A word about the victim-blaming culture we live in. Men that cheat or assault women are not the victim.

If your man has a problem with other women, it doesn’t work to blame every other woman just trying to get through life. The women on my website and fan page are doing their very best to be good wives, good mothers, good friends, just as you are.

If your husband cheats, it’s not your fault.

If a woman is raped, it’s not HER fault.

If a young girl is shamed for having breasts, guess what?

IT’S NOT HER FAULT.

And blaming yourself, blaming her, blaming others isn’t going to stop a man’s roving eye. Men and boys consistently get the message that women overreact and that it’s OK for men to take advantage.

A father (FATHER) pled guilty to molesting his daughter and got probation because the judge felt he wouldn’t fare well in prison. (Um. I think the not-faring-well-in-prison should be part of his sentence.) 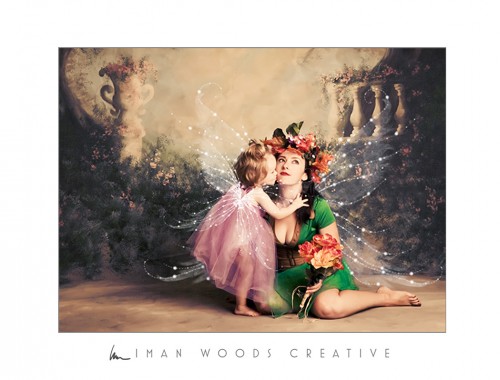 Aimee: I am a woman, a mother, a goddess. I see no fear when I look at myself. No judgment. No comparisons, shortcomings, weaknesses. I see strength, I see deeper than my skin, I see my soul. This new superhero vision was given to me by Iman, but the best part is, I never have to give it back. I see myself for who I truly am – confidently, unconditionally, joyfully – in my photos first, and now every time I look in the mirror. I feel it even with eyes closed, when I sleep, when I walk, when I work, I carry it everywhere now: self-love and appreciation. It all started with one photo and an artist who saw inside me first.

What message does this send to men and boys? You’re not responsible.

While it tells women and girls that we ARE responsible for something very much out of our control.

My best guy friend, Curtis, is one of the best men I’ve ever met. This guy’s honor code is what other men should strive for. I was telling him how hard it was to write this blog and he agreed that it’s an important topic with a lot of responsibility.

“A woman can show up at my door butt-naked. That doesn’t give me the right to have sex with her. An outfit or lack thereof is not the cause of rape. Real men already believe what I just said. Men need to stand up and let society know that women are not at fault for being pretty or dressing sexy. Women in some Middle Eastern countries are completely covered up and they are still assaulted.”

Many pinup models have been assaulted and turned to pinup art as a way to learn to feel sexy that also felt safe. Pinup art (when evoking the 1950s classic style) is a beautiful and naive form of sexy. 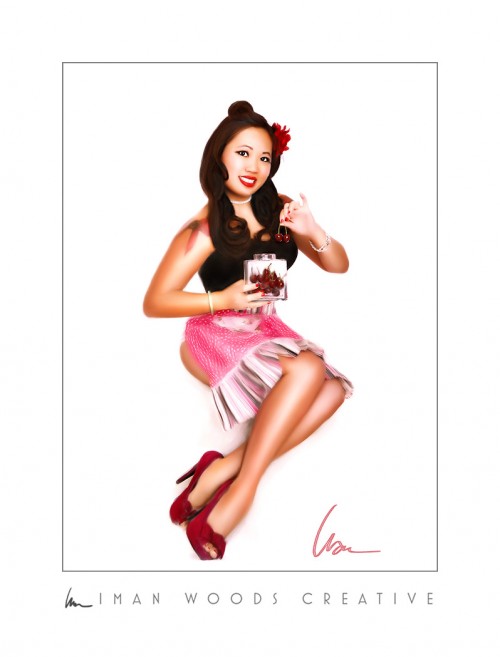 I had to admit that I had a problem and make MYSELF accountable for MY OWN actions. I removed temptation by not buying stuff in the first place. I added therapy and exercise. I eventually won. But it will be something I have to watch and monitor the rest of my life. 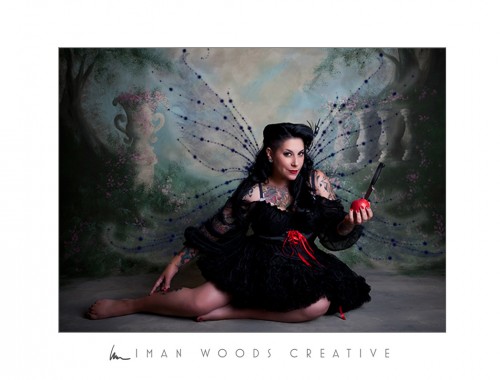 Being a mother of two children, fighting to win against several breast cancer tumors, going through a plethora of treatments and working to help contribute to my family; my mind, body and spirit were quite exhausted. Iman happened to come into my life through a couple of mutual friends and Facebook. I was not only given a gift where my physical appearance was transformed, but so was my mind, body and spirit that just hours before, felt battered. Iman made me feel happy as I giggled my way though a very magical and empowering photo shoot. I left her studio, feeling beautiful. Her words, encouragement and the images she captured of me that day will always be treasured.

So I do apologize for this: I’m sorry we live in a culture of victim-blaming.

I’m sorry we blame the mistress more than the straying husband. I’m sorry we give men far more control and power than we should.

I’m sorry if your God is small and your body and sexuality are a burden.

An empowered woman is sexy. She knows how to enjoy her body, please her man, and she won’t settle for a man who wants less than her. She also understands that her man will naturally see many beautiful women in the course of his lifetime. And she is not threatened.

I’m truly sorry you feel this way. There’s a photo shoot for that. 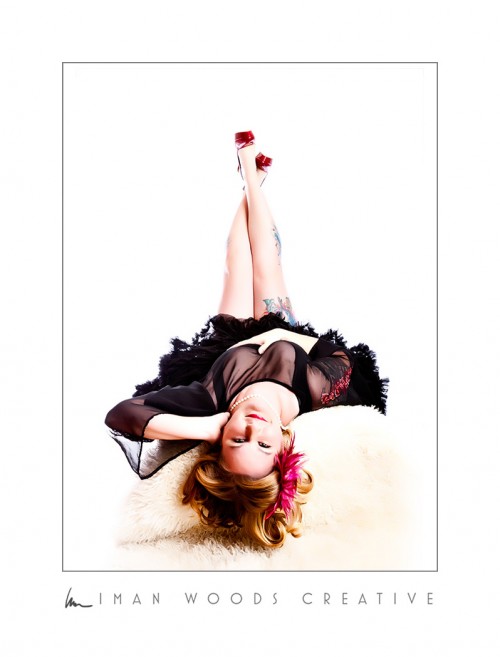 Amber: Iman’s work made me take a step back away from the daily look in the mirror at a overworked and under appreciated mom. That step was in makeup and heels and I felt brighter and bolder than I had felt in years. The smile was real not forced and I truly SAW the woman I am. I am more thankful for that reminder than I can say.