You Are Here Home » STARTING OVER MIDLIFE » Show Me the Money 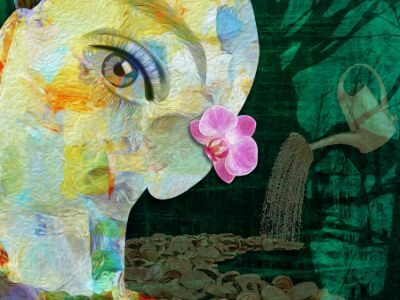 Most motivational experts agree that how you look at a thing dictates how you will act toward it. I’ve certainly found the truth in that. When it comes to money, it’s all about how you look at it.

Show me the money!

But already I have been balky about this dream goal. It seems like the harder I try to save, the more little things crop up to make me spend every dime I’ve got.

For example, my husband, “Virgo Man” got a bonus that we were totally not expecting. It’s gone already, and I’m right back to squeeze pennies and dimes to get the bills paid.

If we had put that bonus aside, that would have been a giant chunk of my savings goal for the whole year. And it should have been a slam dunk since it wasn’t money we were expecting. But somehow, it wasn’t so easy. Apparently, it was impossible, even.

I’m not trying to blame external factors or anything, I’m just realizing that there’s some belief I have about saving that is getting in my way.

I’m going to try a little reverse psychology on myself. Instead of focusing on saving, which is the equivalent of not-spending, I’m going to focus on spending. I’m going to spend every penny that comes across my attention span, no exceptions.

Really, I don’t believe in scarcity. I believe in abundance. I believe in giving 100%, and sometimes 110%. If you’re going to do a thing, do it right. So when I try to tell myself that I have to save because a day will come when abundance will let me down, I just really don’t believe it. I don’t know about you, but I call that for what it is: lack of commitment.

A lack of commitment is a pretty serious impediment to achieving a goal.

I have decided to try a different approach, and focus on spending instead of saving. In my inner world, spending is gratifying. It feels good. It’s fun! That’s my nature, so I’m going with it. I’m going to spend some of my pennies on things in the past. Those would be things like the utility bill for the energy we’ve already used, the raggedy tee shirts that need replacing, or the loose filling in that back molar.

I’m going to spend some of my pennies on things in the present, like gas to keep the car running, food to keep my family running, and the mortgage payment to keep a roof over our heads.

Spending on things in the future is fun. Take, for example, next summer’s camping trip. We have all agreed we would like to camp in a rented RV instead of in the tent that flooded during last year’s camping trip, when it rained (poured, actually) for 18 straight hours. It would have been much more enjoyable had I been able to warm up the spaghetti under the cover of an RV, instead of standing out in the drenching rain with shoes floating past and my glasses completely fogged over.

So now, when I set pennies aside, I can say I’m spending them on my summer vacation.

Spending on things in the future is emotionally rewarding. I’d like to be able to help my kids get a college education. Setting pennies aside for that, I can say I’m spending them on my children’s future well-being.

Spending on things in the future is gratifying. It’s not about scarcity, but about abundance, and about anticipating all the future abundance I’ll experience because I’ve got the pennies available.

What’s the difference, you ask, between saving for those things and spending for them? Well, that’s easy. When it comes to money, it’s all in how you look at it.

« Dream Big: Be An Entrepreneur This Year
Living the American Dream Can Require a Leap of Faith »