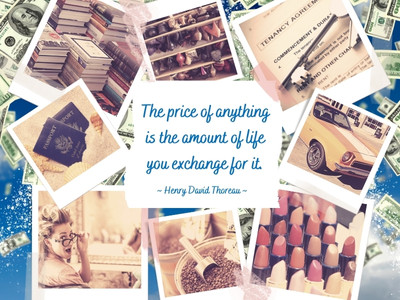 When I was 10 or 11 years old, I used to dream about the turn of the century, and how old I’d be when I’d turn 44. That age just seemed so impossibly old!

And yet here I am, well past that point, and much older than the impossibly old self I tried to imagine back then.

In honor of my dream to get my finances in order, I thought I would review and evaluate eight of my lifetime purchasing habits–the things I’ve purchased year in and year out, and what they’ve cost me.

In today’s dollars, that is. Trying to calculate 1976 dollars would just about do me in since I barely passed high school algebra.

8 Lifetime Purchases and What They’ve Cost Me

Until I was sixteen years old, I don’t remember ever having a real haircut. I mean, maybe I’d have my ends trimmed at the end of my mother’s weekly hair appointment, but I never had a real “hair appointment.” Well, except for the one right before 8th-grade graduation, which left me looking like a dachshund.

Anyway, at 16, I had a student teacher for my English class, and she had the most amazing short haircut.  She recommended her hairdresser, in the next town over – a college town. So one day I drove over there and got my heavy waist-length hair cut off.

The hairdresser had me bend over forward with my hair falling over my face, and she cut it off in one big chunk, and then wrapped the hank of hair in a rubber band, and handed it to me. It looked like a horsetail. I went home that day with very short hair and presented my mother with the chopped-off horsetail. I think she was stunned. I have never looked back.

I figure that over the years since then I have spent around $28,800 on haircuts.

My first car was a bronze 1968 Vega. I believe this was the model that had a tendency to burst into flame in the event of a gentle rear-ender. But that never happened to me, fortunately. Later, I  had a pea-green Fiat. If you are of a certain age, you know the car I mean, because they were everywhere.

They looked like shoeboxes on wheels, and everyone called them Fix It Again Tony (FIAT, get it?). I abandoned that car in the parking lot of my last college apartment. It had served me well, and it was dead by the time I was done with it.

After that, I had a succession of Toyotas, Hondas, and one unfortunate flesh-tone Datsun four-door sedan that made me feel like a two-bit insurance salesman.

I’ve had a grand total of two new cars over the course of my life. One was a sea-green Toyota station wagon with four-wheel drive, and one was my all-time favorite car, a pearl blue Toyota 4Runner. I would never buy a new car again, but I did love those two new cars with their new car smell and their reliable, faultless operation.

Total expenditure on cars: somewhere around $70,000 (not counting the interest on car payments, which probably almost doubles that amount).

I have never tried to calculate my expenditure on books because the very idea scares me. I asked my O Psychic One and Sir Empath today for estimates on how many books I’ve read in my lifetime. Sir Empath said 20,000. O Psychic One said 100,000.

They both know better than to underestimate!

I figure I started reading at 3, so that’s 53 years of reading. But I probably did not really get going until I was about 15. So let’s say that over a period of 40 years I’ve read an average of 24 books per year. If books are about $10 each, that would come out to somewhere around $10,000. But that seems ridiculously low.

I can guarantee you I’ve spent WAY more than $10,000 on books. Probably at least 3 times that amount.

Once when I was a youngster in my first job, I walked into a meeting wearing my best business suit and carrying my fancy briefcase, and an acquaintance told me I looked nice except that I needed lipstick. “You look half dead,” was how she put it. Since that day, I have never been without lipstick.

The thing is, I am always buying lipstick and always, reliably, buying the same damn color. It’s a sort of brown/raisin/plum color. No matter how hard I try to choose another color, any time I buy lipstick it winds up being that same shade. I have 4,235 tubes of brown/raisin/plum lipstick.

I did not drink coffee until I was 22 years old. I associate the smell of coffee with the kitchen in my childhood home, because my parents drank it, but it never interested me until one fateful day when a boyfriend walked me into Cafe Mediterraneum in Berkeley, California. This was in about 1977, long after Cafe Med’s heyday. Still, on one wall, the words of the immortal student activist Mario Savio remained:

“There’s a time when the operation of the machine becomes so odious, makes you so sick at heart, that you can’t take part! You can’t even passively take part! And you’ve got to put your bodies upon the gears and upon the wheels…upon the levers, upon all the apparatus, and you’ve got to make it stop!

For you younguns, Mario Savio was one of the leading lights of the Free Speech Movement, which had its roots at the University of California, Berkeley in the 1960s.

But anyway. Cafe Med served something called a cafe latte, in a thick bar glass that was so hot from the steamed milk you could hardly hold it in your hands. The taste of it was a revelation, and I was absolutely hooked from the first sip.

To this day, coffee is my most snobbish and persistent addiction. I would rather drink Carlo Rossi burgundy from a jug purchased at the Grocery Outlet than drink anything less than the best coffee available.

I figure I’ve spent at least $21,840 on coffee that I brewed at home–never mind what I bought ready-made, and what I spent on equipment and accouterments.

This is a sad one. I’m not big on vacations, the real kind where you go away for at least seven consecutive days. In my adult life, I can think of a grand total of three times I’ve done that.

I do not care about shoes. I will always go barefoot, no matter the season and no matter how cold it is. I would rather have the cold seeping up into my calves and knees than confine my feet in shoes. Also, I don’t like spending money on shoes, because I”m hard on them. Possibly this is because as a rule, I’ve only ever had one or two pairs of shoes at a time.

My mother, on the other hand, has shoes in common with the past First Lady of the Philippines Imelda Marcos’ famous 3,000 pairs. Growing up, I can recall standing in her closet and looking up at the towering stacks of shoeboxes, meticulously marked in her neat handwriting: Pink Slings. Black Patent Sandals. Brown Leather Pumps. And so on.

I don’t get people who spend hundreds on Jimmy Choo or Manolo Blahnik. Possibly I am so out of the loop on shoes that I even have the fashionable designers wrong.

I didn’t own a house until pretty recently, so I’ve spent a lot of money on rent over the years. My first apartment was probably about $250 per month. The most expensive place I ever lived was in Santa Barbara in 1989. It was $2500 per month, a shocking amount back then.

I suppose that means that I’ve earned something around $2.5 million in my life. And that’s enough to take my breath away.