You Are Here Home » WRITE WITH US » Spending Money: The 2000 Dollar Prom Date 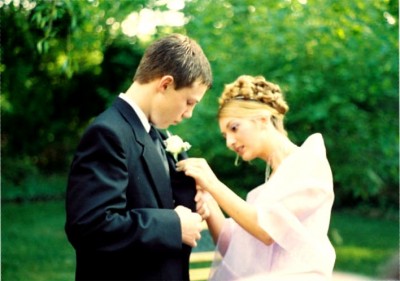 There was a time when a headline like The $2000 Prom Date would evoke shocked disbelief.

That time was about a week ago for me. Sir Empath is going to be a junior in high school next year, and here I’ve been worrying about paying for college, when prom expenses are looming.

According to USA Today, by way of Andrea Woroch, people in the northeastern part of the US are expected to spend $2000 on the average spring formal this year. The average nationwide is almost $1100, and I’d have been willing to bet that the West Coast, where I live, is right up there with the East Coast. But no! Out here, people are spending about $750. I still think that is outrageous, but compared with $2000 it looks pretty darned sensible.

While we take a moment to let that sink in, go on over to the USA Today link. You’ll see a picture of business reporter Hedley MalcomÂ  modeling her senior prom dress from 2007. That was just about enough to knock me off the main story. A girl who was in high school in 2007 is now a business reporter for USA Today.

How can this be?

But I digress. Back to the prom date. There are two very telling quotes in the article – so telling that I’m going to quote them again right here. First up, we have Kit Yarrow, a marketing and psychology professor:

This is social-arms-race spending. It’s extreme.

It seems that the dress and the tux are mostly the big ticket items. A couple of moms are quoted as spending $500 and more on the prom dress for their daughters. I have thought about it for several days, and I’m quite sure that I have never in my life spent anywhere near that for any dress, including my wedding dress (which cost me $85 at Loehmann’s and that thrilled me almost as much as getting married did).

The other day at a meeting, I complimented a woman on a lovely red swing coat. She said, “Guess how much it cost!” Never having laid eyes on her before, I wasn’t sure what to guess, so I said “$500?” I figured that would be a compliment either way. If it cost less than that, it meant she had a good eye. If it cost more than that, it meant I didn’t.

And you know what? I do the same thing, only in reverse. If I get a compliment on something I’m wearing, I shout “Five bucks at Salvation Army!”

Maybe those are both examples of social-arms-race spending, too.

I’m going to assume that teenaged boys are still renting tuxedos for prom, and not buying them. It may not be a safe assumption. But I’ll tell you this much. I am not going to buy Sir Empath a tuxedo, because then it might start to make a weird kind of sense to find more places for him to wear it before he outgrows it.

And frankly, I don’t think a teenaged boy ought to have enough places to wear a tux to justify buying one instead of renting it. After all, I still picture him in onesies. I am not ready for him to own formal dress and have it hanging in his closet, awaiting his next night on the town. What’s next? Martinis? Cigars?

Another prom expense nowadays is the accessories: hair baubles, jewelry, and shoes. My prom accessories consisted of (1) flowers (2) a silk garter and (3) shoes. In the flower department, serious relationships involved an orchid for her and a rosebud for him; casual relationships were carnations all around.

I did get new shoes, and that was funny, because once I was inside the gym and on the dance floor, the shoes came off. I’m pretty sure I never wore them again – just on the round trip from house to car, from car to gym, and back again.

I’m skipping over dinner in order to land briefly on transportation before I stop ranting. I was driven to the prom by my boyfriend in his uncle’s flesh-tone 1961 Rambler. It had seats that reclined all the way back, but they were bucket seats and it was a manual transmission, so not much could go on.

Now the kids are taking limos. It seems to be a given that there will be drinking, and therefore driving should be avoided. That makes sense. We drank too, only our parents kept up a strict facade of ignoring the obvious. There would not have been a way to ask for a limo under those circumstances. I’d have been grounded and locked in the house for tacit admission of intent to drink.

It definitely would have been smarter, though.Â  I’m thinking Sir Empath will get the limo.

No hotel room though! Let’s not even go there.

So what do you think, World of Dreamers? Is there a $2000 prom date in your future?