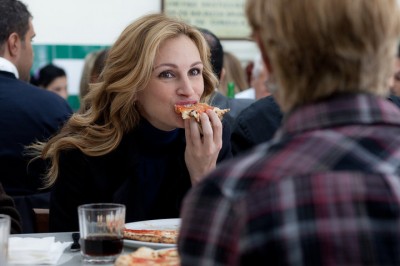 Because of my dream to have a screenplay produced, I thought it would be interesting to do a review of Eat Pray Love from a screenwriters point of view. Have you seen the movie?

Did you enjoy the travelogue? Do you think the film was a good representation of Elizabeth Gilbert’s book?

Movies are an attempt to tell a story, along with this intent is the idea of communicating a set of characters, a certain period of time, or even a strong emotion. Screenwriters who watch movies tend to pay attention to the intent of a film and judge it accordingly.

In my blog from last week, Will Eat Pray Love Get Lost in Translation, I wrote about movie adaptations from books, and how they rarely work. Let me make this perfectly clear, I didn’t finish the book. I made it only half the way through Liz’s time in Italy. I could no longer stomach her narcissism and me-me-me-isms. I later discovered that people either loved or hated the book.

I was meeting some of my fellow 8womendreamers at the theater. Three of them had read (and loved) the book. Women are really an under-served demographic when it comes to movies.

Since the book was on the New York Times Bestseller list for so many months, a Oprah Book Club selection, and was all the buzz amongst so many women, we assumed people would be beating the doors down to see it (especially since this was the opening weekend).

Some came in pairs, others in groups. My guess is there were even some book club members in attendance. There was even a smattering of men scattered in a sea of women. The theater was full by the time the lights went down and hopes were high that the movie would take everyone away on Elizabeth’s soul-searching journey.

The beginning of the movie gives short shrift to the unraveling of Elizabeth’s marriage (to Billy Crudup) and subsequent divorce. She takes on a much younger boyfriend she tires of after only a couple weeks (although in the book he tires of her).

She decides to embark on a year long journey of self-recovery and discovery.

How can she afford this extravagant trip?

Liz’s sojourn was funded by a generous advance of $200,000 to write the memoir. She was to pen this book after return. Some may question the integrity of the true reason for her trip (this advance was not mentioned in the movie or the book).

There is a staying that films are edited, not made. A good editor may not always be able to salvage a bad film, but a bad editor can ruin what might otherwise been a wonderful film.

When film shots are placed next to each other in a sequence, the link between them is known as a transition. The simplest of these is a cut – a straight splice from one section of film to another. Sometimes we notice these, and sometimes they are so subtle we do not.

In Eat Pray Love, the way some of the scenery was filmed it was hard to stay visually with a scene. The film scenes sometimes would come swooping down on the characters like some hawk about to grab them and take off in flight. This type of transition was annoying. The film could be visually beautiful some scenes and then dark and gungy in others.

Was some of the problem with this movie the way it was filmed and edited?

The screenwriters Ryan Murphy and Jennifer Salt fail horribly to elaborate on her inner turmoil and depression. It feels more like a mission for soul searching.

Film critic Dezhda Gaubert writes: “There are always changes made to the book, that ironically water down the plot, instead of bringing it into focus. There’s no clear inciting incident that launches Liz’s nervous breakdown (indeed in the movie, she doesn’t have one), thus the stakes are low certainly not enough to send a woman off on a yearlong trip to foreign lands.”

Casting is vital to a movie’s success. I believe an unknown should have been cast for the role of Elizabeth Gilbert. The viewer would be able to focus on the role and the unfolding story.

It’s hard to see past Julia Roberts, a larger-than-life Hollywood star to the character being portrayed. Julia seems to play herself in most of the roles she acts in.

Personally, I clearly felt more of an emotional connection with Richard From Texas (Richard Jenkins) and Felipe (Javier Bardem). These two roles had more back story in their limited time on the screen than Liz who was virtually in every frame of the movie.

Eat Pray Love has proven my point that books rarely translate well into movies. The website Rotton Tomatoes gave the movie a 38% on the tomatometer. The tomatometer measures the percentage of positive reviews from approved critics.

Movie critic Randy Cordova states: “In the memoir Liz emerged as self-absorbed, spoiled and emotionally reckless. She wasn’t terribly likable, but she was oddly compelling. In the movie, the emphasis has shifted a bit-now you’ve got a character that is a lot more likable, BUT she is a lot more interesting.”

Entertainment Weekly gave it a C+.

The Hollywood Reporter Kirk Honeycutt:– “A heavily idealized journey of self-discovery with a pretty woman, pretty scenery and a pretty shallow view of Eastern spirituality.”

Variety’s Justin Chang – “Gilbert’s more discriminating readers may find themselves reaching for pillows and Pepto Bismo by the end of this voyage.”

After the movie, I polled the girls to get their reactions –

Catherine’s thoughts – “It was like visiting an old friend, and brought back memories of the book. Since I loved the book, I enjoyed the film. I am disappointed with them not using someone like Jenny Bicks to create a running monologue of Elizabeth narrating much of the movie. Bicks was wonderful at narrating with Sex and the City in the television series and Men in Trees, which I think would have helped people who haven’t read the book.

I liked Julia Roberts in the role more at end of the movie, but would have liked Cate Blanchett in the role. I feel they did not really capture that Liz was dealing with major depression – the kind of depression which needs drugs to overcome. I always think of that scene in the lawyers office in Under The Tuscan Sun with Dianne Lane when I think of portrayal of a woman at the end of her rope – she did such a great job of portraying her broken heart in that film. I just didn’t get the same from Julia Roberts. In fact sometimes it was hard for me to tell if Julia Roberts was feeling anything.

I was disappointed in their portrayal of Richard from Texas because he was so much stronger in the book, and the story about him almost killing his son isn’t true. Alec Baldwin would have been great at playing an in-your-face A personality.

They did not take the time to fully develop her close friendship with the woman in Bali, why she wanted to buy them the house, and asked her friends to help.

I like the way it ended though – I remember the trip they took to the island.”

Heather’s thoughts – “I wanted to LOVE this move, Instead when I got home and my husband excitedly asked how it was, I responded “Good”.

I love the story, the scenery, what they covered on film in a little over 2 hours, but I wanted to connect to Liz. Her intense processing when she is deciding to go and throughout the experiences at all the destinations, were light.

I finally started to care about Liz half way through the movie.

I need to read the book again and reconnect. Maybe I’ll find the tidbits I was looking for after the fact.”

Laurie loved the movie and thought it was a successful adaptation of the book. “There was a feeling of a woman stepping away from societies norms and finding herself, both in the book and in the movie.”

And a scene from the movie with Richard from Texas –

An my review? 1 popcorn bag out of 10. I would not recommend this movie, as it seem as contrived as “Sex and the City Part II”. Don’t get me started on that shallow mess.

What did you think of the movie?Â  Was it Eat, Pray, Lost for you too?

I’d love to read your review of the movie so leave me your comments below!

Toni left 8 Women Dream in November of 2010 to work full-time on her screenplay and focus on Club B.

« Let Me Tell You How I I Lived an Eat, Pray, Love Journey
Passion, Plan, Execute: The Business Version of Eat Pray Love »