You Are Here Home » WRITE WITH US » Can Feng Shui Help Your Big Dreams Come True? 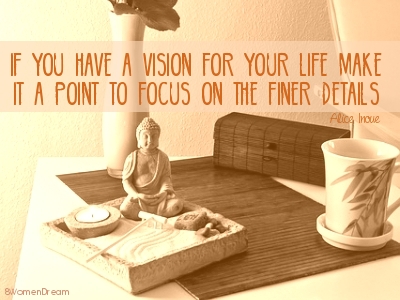 Have you thought about your surroundings and its ability to help you achieve your dreams? If you look around the space where you work on your big dream, does it reinforce your unlimited possibilities and invite you in or do you feel anxious and unable to sit down?

Have you thought that it might be the art on your walls?

At a Feng Shui consultation, most people expect advice about typical things such as the placement of their bed, the importance of the entrance, or the balance of the elements in their environment. They are often surprised, however, when I also bring up the significance of the art on their walls.

Feng Shui Consultants differ from decorators in that much emphasis is placed on the message of the art rather than just the color, design or medium.

This may be something you’ve never actually thought of before, but I’d like to suggest to you the idea that every picture on your wall sends a message into your environment. Whether it’s an inexpensive poster or a rare painting, it is “talking” on a constant basis and reflecting on what is going on in your life.

A very nice man who had been divorced for a few years had called me for a consultation thinking that maybe improving the Feng Shui of his home could help him find a new relationship. In casual conversation, he mentioned that there seemed to be a lack of appropriate women around and if by chance he did meet anyone, the relationship didn’t last very long.

Upon entering his bedroom (the “relationship” area), my eyes were drawn to a large picture above his bed. It was a black and white aerial photograph of a hardened cracked lava flow. It looked dry and lonely to me. On the adjacent wall was a large poster of an airplane taking off. I couldn’t help but remember his mentioning that the women he did meet seemed to always “take off.”

After discussing the message I saw in these two pictures, my client realized they didn’t reflect his relationship goals and these pictures were better suited for other areas of his home.

Another client had in her “wealth” corner, a large painting of several empty jugs lying on their sides with pools of spilled water around them. It was a beautifully done painting, however, in this case, I immediately saw the message “drained” and “empty.”

Was there any correlation to her finances?

When I asked, she readily shared with me that the picture accurately reflected her current financial picture. As we spoke, she removed the picture especially when I mentioned to her that in Feng Shui, water represents “wealth.” In a local business I visited recently, the owner mentioned that two non-related business partners had either cheated him in some way or back-stabbed him by consorting with the opposition. All this started with the move to his current office building.

Was there something “wrong” with his business from the perspective of Feng Shui?

His office was in a good position far from the entrance. The entrance was clear, and there were no blockages to note. His desk also, was in a favorable position, but what was that picture behind his desk? A large tough-looking tiger with his mouth open ready to devour!

I asked him about the significance of the tiger. He said that when he moved into the current office building he bought it as a symbol of power. I shared with him what I saw from an energetic point of view.

The tiger represented his partners, “devouring” him when he wasn’t looking as the tiger was at his back when he was seated. He immediately felt the significance of what I was saying. I suggested that he replace the tiger with one of a large mountain, representing stability and strength. Having the mountain at one’s back represents protection and safety, a much different energy than a tiger waiting to pounce.

Look around your own home or business. What message are you sending into your environment and into your dream life via your artwork?

• Does it reflect your dream?

• Do you feel good when you look at it?

If so, then it’s passed the Feng Shui test!  Now sit down and start working on your big dream.

Alice Inoue is a feng shui expert, author, and life coach from Hawaii. She is a former television presenter, most notably for her Do Sports program on Fuji News where she showcased activities for Japanese tourists visiting Hawaii. You can read more about her on her website at AliceInoue.com.