My husband and I had the opportunity to go toÂ Hot August Nights in Reno, NV over the weekend.

We had a wonderful time, saw some beautiful carsÂ and surprisingly I found the entire weekend very relaxing.

Due to construction on Highway 80 and our decision to cut across to Highway 50 via Lake Tahoe we were in the truck for more hours coming home than we should have been. 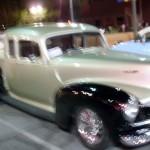 We were surrounded by the beauty of the mountains, the lake and all of the trees when our conversation zigged and never quite zagged back.Â  I wonder if everyone thinks like this.

Below is an excerpt from said conversation.

M (me to my husband) Have you ever wondered what would happen if the tops of those trees came off and flew across the way like giant spears?

H (husband to me)Â A bunch of people would probably die.

M – It would take a mythological God to do something like that.

T (text to daughter) You know they never explained who or how they got the cousin tied to the boat. This was about a show we watched a few weeks ago – just popped into my head.

DÂ (reply from daughter) Nope…Henry is a jerk though

T – Which Greek God would be able to slice the tops off a bunch of trees and send them over yonder like a bunch of giant barbed spears? Dad said Zeus but why start so close to the top.

M – I was just thinking…what if the chimney fell down and we hauled it off not knowing that the key to saving the world that was crumbling around us was trapped inside?

DÂ – Zeus could but he has lightening so why would he?Â  Demeter is the Goddess of crops so probably her.Â  You’re making me want to play acropolis.

M – And what if there were more pieces somewhere else?

T – Oh good – but right now we are talking about bricks saving the world.

H – Someone would have to chase them down.

M – Have to think about that.

TÂ – What if the thing in the brick wasn’t the only one?Â  What if there were many but we had to learn how to talk to the ghosts only the children could see?

DÂ – Have you guys been drinking or are you sleeping right now?

H – How do you put it all together in the end?

M – I wouldn’t want it to be a sappy ending like mashed potato mountain movie.

M – It wasn’t sappy for the time.Â  Close Encounters of the Third Kind.Â  Had the guy from JawsÂ in it – not the sheriff or shark hunter the one that played the guy who had studied sharks. What is his name?

T – Who was the guy in Jaws (repeat from above)

H – How has your daughter never seen jaws?

M – Maybe it won’t really have an ending.

T – And in the end it won’t have anything to do with Aliens.

M & T – What is the name of that profit who predicted the end of the world?

Does anyone else have suchÂ disjointed thoughts?

I have my entire life.Â  It is only since I started on this dream path that I talk about what I am thinking.Â  I thank my husband for playing along even when he has no idea what I am talking about; I thank my daughter who always seems to know where I’m at even when she only hears a portion of the conversation.

(Dawnda’s dream was to get some piece of writing published in 2009.Â  She left the 8 Women Dream group in 2009 to focus on finding full-time employment.Â  We consider her an accomplished dreamer as she published her thoughts here and began her own scary stories blog at www.killeryarns.com)

« Continue Forward With Your Dream Like Lisa Nichols and Mir Kamin
Warning: Don’t Tease The Dreamer »