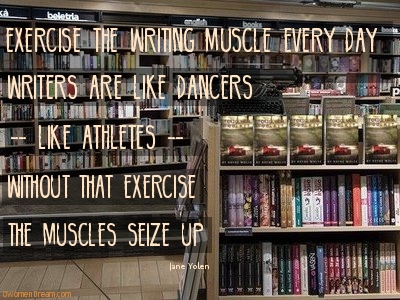 I started my writing career dream when my boss of twelve years began planning his retirement. That was about 1995.

Concerned about my next career move, my boss encouraged me to strike out and try something completely different, like journalism. He insisted on paying for any class I wanted to take. I was grateful yet dubious.

I didn’t believe in myself, but I cashed his checks anyway.

At the time, independent bookseller Book Passage in Corte Madera, California, offered a few classes taught by local journalists and novelists. Today their class roster is a Who’s Who of bestsellers, and I often leave drool marks on their News & Reviews newsletter.

Book Passage also hosts free author nights, where writers talk about their books and what led them to their writing careers. Those free nights were so exciting because a dope like me could ask super-famous writers anything at all.

I remember cringing one night when I asked the author, humorist, and former columnist, Dave Barry, how many drafts it took to go from smile funny to laugh-out-loud funny. He answered that he hadn’t nailed that down yet, which was pretty amusing. I asked Angela’s Ashes author Frank McCourt if he ever cried while writing. That’s what I wanted to know.

One evening writer Joyce Carol Oates spoke. I was so in awe of her prowess as a writer; I couldn’t think of a thing to ask. I mean, c’mon; she’s had the chops for 40 years. She’s a queen.

Around this time, my first marriage ended, and I was rewarded with a–surprise!–ten grand tax lien. Short of prostitution, I had no idea how to work full time, attend my beloved writing classes, and make enough dough quickly to pay it off. So I went to bartender’s school in the Tenderloin and landed a job at a swanky inn where we all worked in tuxedos and did a lot of fancy-schmancy stuff with martini’s.

That’s where I met legendary S.F. Chronicle columnist Herb Caen. We’d swap San Francisco stories at the end of the bar on opera nights. Indeed, it was Herb who told me to keep writing just like I talked. If I could do that, he said, I could do what he did for a living.

All this encouragement, and still, I wasn’t sure about my writing dreams.

Gee, whose class didn’t I take? Authors Anne Lamott, Jon Carroll, and Adair Lara should have given me discounts for multiple sign-ups, I swear. Adair had a 10-week deal at her house where about a dozen aspiring writers met each week to take instruction, speed write, and read aloud.

It cost a lot of money, so I didn’t feel right asking my former boss. I wrote her a check for half the amount to hold my place and I had no idea where the other half would come. By this time, I had placed quite a few freelance pieces in newspapers in multiple markets.

When an unanticipated tax refund arrived, I was able to dive into an intense period of learning my craft. In addition to amazing and truthful instruction from Adair Lara, I bonded with classmates, Terry Norton and Eileen Mitchell, who writes the pet column for the S.F. Chronicle. We both wrote for the dog culture publication The BARK Magazine, too.

During this time, we three wrote 500 words a day on any topic, per Adair’s instruction to get “all that lousy writing out of the way.”

I finally worked up the nerve to start writing about my family.

One funny piece about my birth mother got published in the S.F. Chronicle with a shorter version appearing in Glamour Magazine. That success proved to me once and for all to get over my self and just W R I T E.

With great instruction from amazing writers at Book Passage courtesy of my former boss, other people started thinking of me as a writer. Sally Smith, the publisher of the independent newspaper, Noe Valley Voice, showed me the ropes of reporting and taught me to laugh at my early newsie nerves.

I began teaching a class at Book Passage, and I launched my column, What Works. Somehow I transitioned from corporate research to journalism, eventually landing a job as a daily reporter surprising no one more than myself.

My step-mom, Robbie, asked me if someone had told me I needed to take 17 classes, attend 139 author events, read 1,000 books, write 500 words a day for years, sell bags full of freelance pieces to newspapers and magazines, and self-syndicate a business column to multiple papers–would I have ever started?

“I probably would have laid down until the impulse faded,” I said with a laugh.