You Are Here Home » WRITE WITH US » Bag the Supermarket Dream: Make Your Own Hard Cider 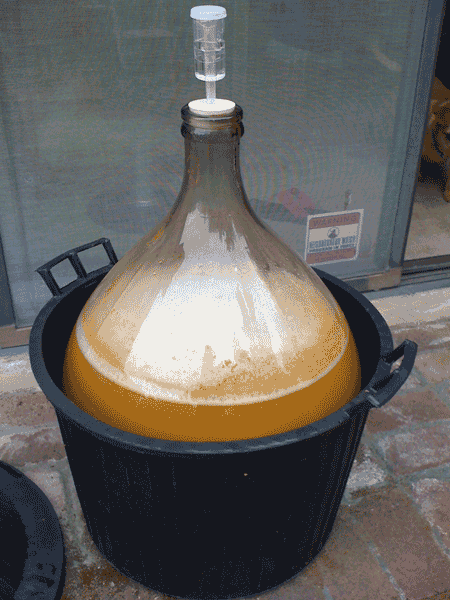 I’d like to introduce you to my baby. Isn’t she a beaut? She’s 13 gallons of apple juice, percolating away to hard cider in a demi-john. I pressed the juice from about 300 pounds of apples that Virgo Man and I harvested from our two backyard trees. It’s all part of my dream to bag the supermarket.

Isn’t she beautiful? That white foam on top – that’s the champagne yeast at work, consuming all the sugar and turning it into alcohol. And let me tell you, this juice is from golden delicious apples, and it is tooth-achingly sweet.

It ought to be high-octane rocket fuel by the time it’s done with the primary fermentation.

I was going to post a video so you could see the bubbling airlock. That’s the thing on top of the stopper. It lets gas out without letting air in, which is a good thing because apple juice is an attractant for acetobacter. Acetobacter contamination would mean I end up with 13 gallons of apple cider VINEGAR, instead of apple cider.

I decided against posting the video, though, because I am probably the only person who actually delights in watching the bubbles in the airlock. It’s proceeding at a rate of about 1 bubble per second. This would make an extremely dull video, not nearly as entertaining as a video of, say, boiling water. Or grass growing. Or someone else’s baby’s first steps.

There is something so satisfying in pressing juice and letting it turn to spirit – but if you don’t have your own backyard trees, and if you don’t want to go out and buy 300 pounds of apples to press, go pick up a gallon of juice from a local grower.

From there, you can go wild, or you can play it safe.

Going wild means you pour yourself a glass of juice to make room in the top of the container, and then you leave the lid off and set it outside. If it were me, I’d put some cheesecloth on top to keep bugs from flying in. But you can leave it at that, and let the natural bacteria do the fermenting. In a few days or a week, you should see some action, like the foam you see on top of my baby. Let that go until the foaming stops, and you’ve completed your fermentation. Done!

It sounds easy, and it is, but you are in control of nothing. You just bought the juice and took the lid off. Nature did the rest. And nature can be a capricious thing. Your fermentation might be slow to kick off. Or you might get vinegar. Or who knows.

The safe way is to get an airlock and some yeast at your local brew store. It’ll set you back a couple of dollars. Go home, pitch your yeast (that’s what the serious hobbyists call “dumping yeast into the juice”), and stop the bottle up with your airlock. Put a bit of water in the airlock, and keep an eye on it. My fermentation got going in just 12 hours. But as my local brew store owner said to me,

Fermentation literally has a life of its own. It starts when it starts, and it’s done when it’s done.

You must avoid the temptation to take the air lock off, because every time you do that you increase your risk of acetobacter contamination. Also, don’t put your juice near a recent vinegar spill (ok, but it COULD happen), or next to your neighbor’s apple tree, which has dropped all of its apples on the ground and is starting to smell suspiciously like…vinegar. But that’s just common sense.

In a couple of weeks, you’ve got hard cider. Yum!

If you’re just making a gallon, have some friends over and drink ‘er up. If you make more than that, be collecting empty champagne bottles, or beer bottles that have twist caps, so you can bottle and age. But read up on that part, because hard cider is kind of notorious for exploding in the bottle if you don’t observe precautions. I’m just saying.

Want to find out more without overwhelming yourself? The best and simplest and most encouraging site I found is here.

Just to keep the connection with financial mastery, here’s what I spent on my baby. Renting the press was $45 for a day and TOTALLY worth it. The demi-john cost me $40, and I’ll have to buy another one because I’m going to rack into a second fermentation. Assorted stuff like yeast, the airlock, a siphon, an acid test, and a hydrometer was another $25 or so. At the end of it all, I expect to have about 50 champagne bottles of hard cider for an investment of labor and about $150. Pretty good, since the average bottle of hard cider is around $15-ish.

See? My dream to  bag the supermarket is WAY fun, don’t you think?