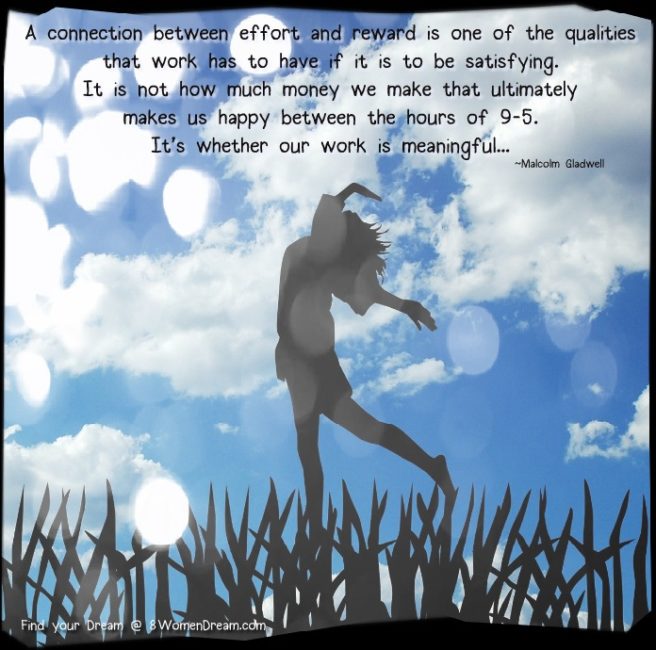 In one of my favorite talks by my very favorite, best-selling author, speaker and journalist, Malcolm Gladwell, titled, Meaningful Work through Passion–not Genius Malcolm discusses what meaningful work looks like.

When exploring what you are passionate about everyone often overlooks the obvious.

It’s not uncommon for the people who feel lost and aren’t sure what they want to do with “the rest of their lives” to ignore the clues that show up for them every single day.

Thinking about the rest of your life is a pretty long time-frame. I would argue that you need to take that expectation down a notch and simply explore the things that are most meaningful to you right now.

As noted in Malcolm’s video, when you look at the lives of incredibly successful dreamers–what Malcolm sees over and over again in his research is the idea of meaningful work.  Meaningful work is the key to dream success.

The idea of meaningful work is embedded in successful people’s consciousness.

In Meaningful Work Through Passion–Not Genius, Malcolm’s shares the story of how the Bill Gates we know was formed. Bill Gates understood about doing meaningful work and what that process looks like, which is a great example of exactly how the dreaming process is supposed to work for you.

“I had the opportunity to interview Bill Gates for my book and I was really curious about what happened to him as a kid because I knew that he had this extraordinary experience as a 13-year-old.

In 1969 Bill Gates goes to this school where they have a teletype machine hooked into a mainframe which allowed him to do real time programming at the age of 13 in 1969.

And if you know your computer history, you know that nobody was doing real time programming in 1969, let alone, a 13-year-old. If you had access to a computer at all, you were using those old computer cards which meant you could do one run every–whatever it was–three days?

Bill Gates was doing the real thing from the age of 13 on.

And how did he respond to that opportunity?

He threw his heart and mind into it!

He never left that programming room. He ran up computer bills like you would not believe. Remember that using a computer was really expensive back then.

Then when Bill Gates was in 11th grade, Paul Allen, who’s is his classmate, found out that there was a mainframe in the in the health center at the University of Washington that was free and wasn’t being used between 2 a.m. and 6 a.m. on weekday mornings.

So Bill Gates would go to bed at ten o’clock at night and pretend to his parents that he was getting an early night’s sleep. He’d set his alarm clock for 1:30 a.m. then sneak out of his bedroom window and walk 2 miles to the University of Washington in the pitch black of night to program from 2:00 a.m. until 6:00 a.m.

Years later, when his mother heard this story for the first time, she said that she always wondered why it was so hard to get him out of bed in the morning.

Why did he go to such extraordinary lengths to program in the middle of the night?

Because he has the right attitude. He was able to capitalize on his programming abilities–not because he’s some genius–that’s not what sets him apart.

What sets Bill Gates apart is that he had a belief in doing meaningful work and he was willing to throw his heart and mind into something because he knew he’d get something back. And that attitude is what allowed him to develop his is abilities in the way that he did.”

Bill Gates was compelled to program whether he was being paid for it or not. Being paid money isn’t what meaningful work is about–it’s about being drawn to do something that you can’t resist doing. You can’t help it. You have to learn more about it. You are obsessed.  It becomes a part of who you are.

I started 8 Women Dream because I loved the idea self-publishing and I am obsessed with the ability to use a platform like WordPress to share my thoughts with whoever will listen. I have always loved publishing–it goes back to my high school newspaper involvement.  Being on that newspaper team saved me.

I can’t stop publishing content for people to read. I can’t help myself.  And I am always trying to get others to do the same.  Just ask everyone who knows me!

Once, I had an interview where the interviewer asked if I was making any money at blogging. At the time I thought it was such an odd question to ask me. The reason I thought the question was odd was because I am compelled to self-publish.  What did money have to do with it?

I HAVE to blog.  I felt he should have just been impressed with the fact that I was doing blogging all on my own.

Even when I have tried to quit self-publishing due to burn-out, it always ends up pulling me back to the computer. If my life permitted it, I would blog every single day all day long–publishing my writings everywhere on the Internet with whoever would have me. Even when I am not blogging, I am reading about the publishing industry and reading other blogs.

Publishing is meaningful to me.

So is talking about making your dreams come true and sharing with you is meaningful to me. I do this because I want to. It’s not about the money involved. I am passionate about women doing more of what feeds their soul.

Ever have a great server at a restaurant who made your dining experience over-the-top-wonderful because of their service? I bet if you asked them, they’d tell you that love what they do. They love serving people. Ever have a retail clerk find you just the right outfit that you were looking for that makes you feel like a million bucks? I’d guess that retail clerk loves finding just the right outfits for customers.

Think about Bill Gates walking for 4 miles in the middle of a Seattle night–2 miles to a university and 2 miles home every week night–in WASHINGTON. He must have walked getting soaking wet by a lot of rain and then there was probably the snow in the winter… because if you know Seattle, Washington then you know the average temperature is 51 degrees with an average of 152 days of rain per year and the average snowfall is 11 inches.

And oh-my-God when the Northern sea wind whips up off Puget Sound your soul freezes and you dream of moving to warmer places like Bali.

I bet there were nights he thought about not going to the university to program.  Just imagine how awful that walk was at times… but then he’d find himself tossing and turning in bed and he’d have to get up and go brave the weather to program.

Look around at your life to see where you behave like Bill Gates.

If you aren’t sure what your passion is–ask those who know you.

I have a friend who is obsessed with decorating and arranging things. She is forever moving people’s furniture around, suggesting a better living-room layout and reorganizing desks for better work flow.  I am always telling her to take an interior design class because I believe that she already a great designer.

But she just rolls her eyes at me when I suggest this–only to later complain how exhausted her job makes her feel. I think but don’t say:

“That’s because your job is not meaningful work for you. You hate Sunday nights and you love Friday afternoons. Your world is trying to communicate with you, but you aren’t listening.”

The answer to discovering your passion is often right there–but like my friend–you dismiss it as foolishness.

Don’t start a blog because you think it will bring you money. Don’t create another Facebook Page, an Instagram account or yet another YouTube video looking to be the next millionaire. Do it only if you are compelled to do it. Do it because you’d walk 4 miles a day through the snow to do it.

Do it because you feel like you will die if you don’t.

Aren’t we all tired of half-hearted efforts made by businesses to gain our attention that show up in our Facebook news-feeds, or of waiters who make our dining experience miserable, or of retail clerks who are rude, or of lawyers who take our money without really helping to solve the problem, or of doctors who refuse to hear what we are telling them, or of dentists who push unnecessary procedures because they want a new sports-car, or of email marketers who flood our email in-boxes with crap that looks copied from the other 100 marketing emails we get that we don’t even bother to look at anymore?

Is that how you want to be remembered too?

Find your passion. Follow it to meaningful work. It’s what dreaming big is all about.

And besides, we need more of you out here living your dreams.