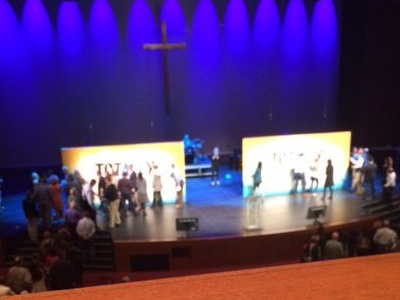 This week, while sitting in church, I was thinking about all of you public speaking career dreamers out there.

As you can see by the picture to the left here, I’m sitting in my spot at my church. Now you know where I sit. Balcony front row. Don’t take my seat. I like sitting up here where my off-key voice goes out into the dead air instead of some poor soul’s unsuspecting eardrum.

Anyway…the sermon was focused on helping us reconnect to the story of what we do and why we do it, which is exactly what I want to talk about today – the power of story over telling people what to do.

Instead of just rambling about why it’s important and why it matters, let me just show you instead. After all, that’s the point behind using story instead of facts and figures–because stories show instead of telling–and that’s how you have the ultimate influence and impact over your people.

So let me just give you an illustration of how story wins.

I’ll use a church setting as an example, but the same would apply if you’re the CEO standing in front of your organization. Let’s pretend that the church leader wants to create a sense of urgency in his people to look beyond their walls – to do more – to be more passionate about what they do – to care more.  The church leader might say something like:

We need to care more about those we serve. It’s important. If we don’t help them nobody will.

He could read this article from KellySwanson.net

I had binge-watched everything I could find on Hulu and Netflix, and was down to the documentaries and shows that never got off the ground in the 80s, when I took a left turn and decided to watch Titanic again. The way I figured it, what better way to spend a Friday night than munching on popcorn and waiting for a ship to sink, while trying to imagine what I would look like if an artist painted me draped across my plaid sofa, naked, wearing only a pendant. Don’t worry, I don’t have a pendant.

Being a motivational speaker, I tend to watch dramas looking for the message behind the message. Being a recovering English major, I still suffer from flashbacks of spending hours around a table in college, competing with other hungover students to find hidden meanings that even the authors didn’t know existed. Titanic was no different. I found myself intrigued by the poor simple folk who danced with sheer unabashed joy at the bottom of the ship, compared to the uptight elite high-brows who mingled unhappily in the formal dining room, imprisoned by the responsibility of their wealth. Or perhaps was I projecting a stereotype on them that didn’t truly exist? Focus, Kelly. Focus. It’s just a movie.

I found it fascinating to watch the good-looking jerk push women out of the way to get his place on a life raft, while the musicians played their violins on deck until they finally just slipped into the water. I’m still haunted by the image of the family huddled in their bed below deck, where they had danced just hours before, and the proud captain who insisted on going down with his unsinkable ship. I marveled at how in one hour there was so much glitz and glamor and revelry, and in the next hour – darkness – the entire ship under water. Everything. Gone. This, of course, became for me an analogy for life – that in one moment it can all be gone. Now you can see why my husband does not like to watch movies with me – even though being a prepper, he’s planning for that moment where it will all be gone. Anyway…. it was the next scene that stayed with me the longest, and prompted me, a week later, to sit down and write these words.

If you watched the movie, you probably remember that scene when the rescue boats finally arrived and what they saw. Nothing. Darkness. Floating debris. Random bodies hanging on. Remember the overwhelming crushing quiet out in the middle of that vast dark ocean? The only sound was the swish of water and the wooden oars hitting the sides of their boats as the rescue crews looked on in horror for any survivors, in what I imagine was a scene that would haunt them forever. It occurred to me in that moment that these rescuers – desperate to find one more still hanging on to hope – had literally become fishers of men.

In that unexpected moment I saw my world in a different way. In that moment I wondered if perhaps I am like the rescue worker on the boat, surrounded by drowning people hanging on to the last thread of hope. What if I am the one who has come along at the very moment to save them? What if I too am a fisher of men?

What if our jobs were more than just what we were hired for? What if the products we sell served a bigger purpose? What if our place at this desk was divinely orchestrated to put us directly across from that person – on purpose? What if instead of teachers, or lawyers, or sales people, or customer service reps, or doctors, or trainers, we were actually fishers of men? And in this moment, which feels so ordinary, could there be something we don’t see – something extraordinary? What if a routine gesture which for us has become commonplace or second nature, to someone else is the blinking light in the middle of the dark ocean?

How would the work we do, the companies we work in, the culture of our corporations change, if instead of selling computers, or providing healthcare, or solving problems, we set our sights on a higher purpose? What if people weren’t motivated by money or manipulation or mission statements written behind closed doors? What if we crossed out that title on our business card and simply wrote, “Fishers of men”?

Which one you think would have a more lasting impact?