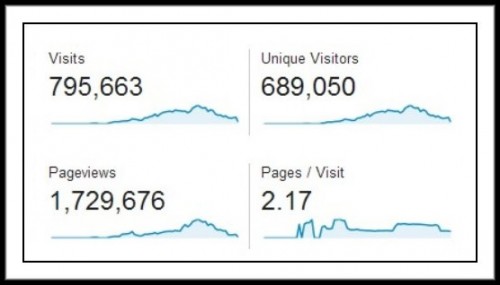 There was a time at the beginning of this dream of mine to help women explore the idea of successful dreaming where I thought the above statistics would be a dream-come-true.

I thought, “If I just get XYZ amount of web traffic, then…”

Except when I reached this milestone, it wasn’t enough, or it didn’t feel like I thought it would so I revamped my definition of my vision of my dream-come-true and I pressed on wanting more.

The big website traffic was supposed to (according to my plan) change the life of the dreamers who participated on 8WD by the sharing their stories.  Through this sharing, their dreams would come true.  I’d also hoped that the stories would ultimately encourage women around the world to take a chance on reaching for their big dream.

When the “Thank you for changing my life” emails began to arrive in my inbox with positive comments from around the web sprinkled with some media attention I thought, “This is great!”

But it still wasn’t enough.  My heart told me that there had to be more.

So I pressed on.  I studied harder.  I stayed up later.

When 8 Women Dream stories began to trend on popular social sharing sites I still remained dissatisfied that my dream wasn’t working like it was “supposed to.” I’d then pour through more books and websites dedicated to helping the online entrepreneur to learn something new and make it BETTER. 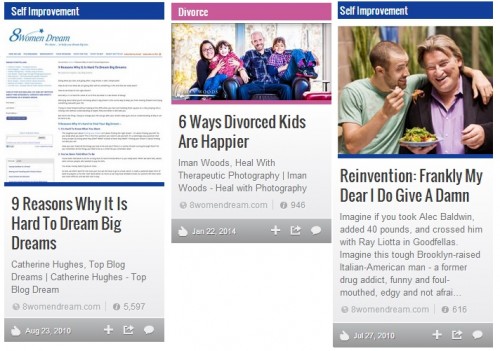 There were times when these new ideas turned out well for 8WD . . . while others failed miserably.  And they failed miserably in a very public way.  Those were the times where I wondered if I should just give it all up and start with a different website dream and begin again from scratch.

I’ve come to question why it is that I am never satisfied with the results and why I am always looking to improve 8 Women Dream.  I’ve wondered if there wasn’t something inherently wrong with me.

I mean, doesn’t every dreamer think this way?

Am I being too negative?  Do I have an unhealthy attitude about what success should look like?  Do I have unrealistic standards?

As it turns out, a psychology professor named Carol Dweck has spent a great portion of her career studying why some people give up in the face of failure while others are motivated to learn from their mistakes and improve.  She calls her findings the “achievement goal theory.”

She came to the conclusion that when it comes to ones ability to succeed there are fixed mindsets and growth mindsets. Ability means different things to different people which determines their motivation and ultimate success. (Source Stanford “The Effort Effect”)

In her studies, Dweck discovered that participants with a fixed mindset based on ego, the belief that intelligence is fixed and the notion that failure is a direct reflection on their intelligence would give up when tasks seemed too difficult, whereas those participants with a growth mindset based on a willingness to learn and grow worked through their difficulties until they achieved success.

In other words, those who thought their knowledge was sufficient, but then failed or were criticized took it to mean that the attempt was not for them (they were not smart enough, or felt their intelligence was being challenged) and they’d quit.

Those who thought their knowledge could be improved and were open to learning (and not afraid to look dumb) looked at failure and criticism as an opportunity to grow in order to achieve their goal and they’d continue on.

You see, the simple belief that you can’t or don’t need to improve stunts your ability to achieve.

Here’s a great diagram of achievement goal theory in action  — 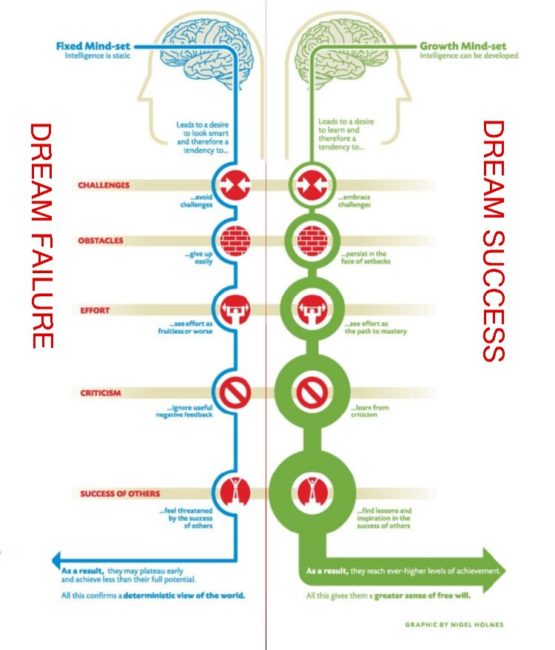 Robert Sternberg, PhD, a past president of the American Psychological Association, says that excessive concern with looking smart keeps you from making bold, visionary moves.  When you move your ego out of the equation and are open to learning more you open the door to achievement and success.

As it turns out, my questioning of everything, my willingness to look like I don’t know what I am doing, and my constant search for knowledge on this subject, will eventually lead to my dream success–that is–if I don’t quit.

I never imagined that success could come from a place of humility and learning over ego and confidence.  Media and marketing would have us believe otherwise.  There really are no overnight successes.

I must remind myself that it may take me the full 10,000 hours that author, Malcom Gladwell says leads to mastery in order to achieve my dream . . .

Even though there are many days during this dream process that I wish it was 60 seconds.

In case you are interested in hearing more about professor Carol Dweck’s achievement theory, this video is her lecture on the subject:

« When Learning Becomes Loathing
Fitness Advice: Do Not Diet »