You Are Here Home » BE A MOTIVATIONAL SPEAKER » When Speaking Gets SCARY! Motivational Speaker Nightmares 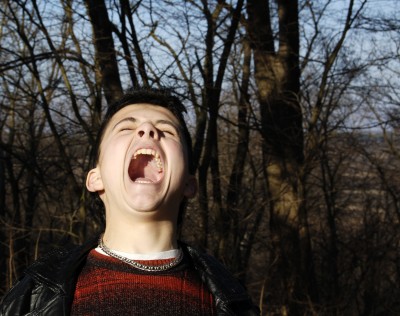 Most people think that it would be easy to be a motivational speaker. Wrong. There is a very dark scary side of public speaking.

In honor of Halloween, I thought I’d take you to the dark side.  Hang on!

Ahhhh….the old video that comes back to haunt you over and over. The video you can’t remove because it’s got so many hits and generates an extra four dollars every month.

So you keep it up there, hoping against hope, that some potential client doesn’t find this one.

It’s that picture you thought looked great at the time. And then a week later, once you’ve spent your life savings on all the copies, you wonder what you were thinking.

You might be thinking, “What? I don’t think it looks that bad!”  That’s because there’s three feet of butt I cut out. 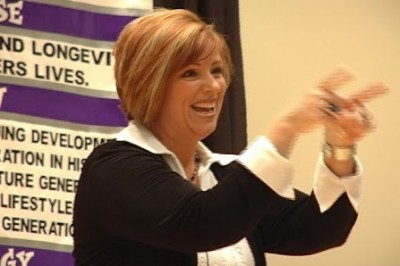 3. Motivational  Speaker Nightmares: Things You Thought Were Funny At The Time

What would possess me to do a video of me, a frazzled mom, hiding in the bathroom from my toddler?

Seemed funny at the time. Not so much now.

… the audience who couldn’t hear me because the sound system wasn’t working, but they were too polite to tell me

…. the cute little guy who came up on stage to move the podium because that was on his to-do list (apparently nobody specified that he should do it BEFORE I started speaking)

… the couple sleeping in the front row of my one-woman show, both of them snoring loudly

… the group of kids I’d been hired to tell stories to at a birthday party, who decided halfway through that I sucked and left

5. Motivational Speaker Nightmares: Clients Who Wanted To Suck My Blood

That was a vampire reference, by the way.  But here are some things that Count Draculas have said over the years . . .

We know you are really great, but we don’t have any money. What if we feed you? Can you come then?

We’d like for you to come speak, but we’d appreciate it if you wouldn’t do all that southern stuff.

I thought Jeff Foxworthy was funnier than you.

We love you work, but we decided to go with a clown instead.

How do you feel about performing in a prison?

Sure! We will pay you full fee. Just fill out this tiny form. And then go online and apply for this code. And then wait two weeks and fill this sheet out. And then apply for a vendor number. We’ll let you know two weeks after that if you are awarded the contract at which time you will need to fill out a series of forms.

6. Motivational Speaker Nightmares: Outfits That Looked Good In Your Mirror At Home 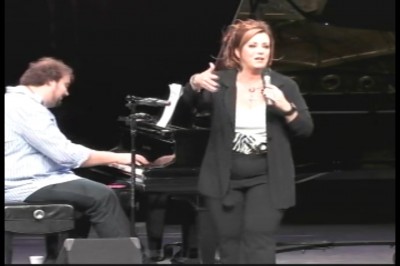 1. Deciding that my book would be eclectic if I didn’t put any picture on the front. Just words and nothing else. I sold two – both to my mother. And she returned them.

2. Finding a typo on the back cover of my book after I’ve sold hundreds. And still not changing it.

3. Forgetting to save receipts.

4. Making what I thought was a local call from a hotel that was really long distance. Cost me $147 and it would have been free if I used my cell. But I didn’t want to get up.

Happy Halloween! I hope your dream is bigger than your nightmare!

Kelly Swanson
You. Your Story. Make An Impact!